Former Central Bank Governor Ajith Nivard Cabraal in reference to Daily FT’s short Editorial titled “Getting away with Economic Crimes,” published on 31 October 2022 (https://www.ft.lk/ft_view__editorial/Getting-away-with-economic-crimes/58-741478) said he strongly objects to the “vituperative and damaging Editorial.” Following is the full text of Cabraal’s reply.

In your Editorial, you have referred to a payment of “$ 6.5 million to Pakistani American political donor Imaad Zuberi without the approval of the Cabinet Ministers and as a result committed criminal breach of trust”. In this regard, I wish to state that the payment of $ 6.5 million was made by the Government in respect of a Communication Program of the Government, and that the Central Bank effected the payment on the official written instructions of the appropriate government authority, while following the respective payment protocols and procedures. Therefore, there has been no procedural or other violation in making these payments.

Re. your allegation that “Cabraal and those who caused the outright economic collapse should be investigated and prosecuted by the State”, I set out below the manner in which “the economy was handled” in relation to the matters referred to, by you. In this context, as stated in several Cabinet memoranda, Sri Lanka’s debt challenges were mainly caused by the rapid and irresponsible forex borrowing spree whereby the forex debt of the country ballooned by a massive 65% from $ 23.4 b to $ 38.7 b in five years – 2015 to 2019. During that period, the Government borrowed $ 10 b (net) in International Sovereign Bonds (ISBs) often at interest rates of over 7.0%, of which $ 6.9 b in ISBs was issued in a blitz of 15 months from April 2018 to June 2019. The Government had further borrowed $ 2.0 b as a “term loan” from China, and received $ 1.1 b as sales proceeds for the sale of the Hambantota Port. When considering that the Forex Reserve by end-2014 was $ 8.2 b, calculations indicate that if the Forex Reserve had been prudently managed, the authorities should have had a Forex Reserve of at least $ 32.7 b instead of the mere $ 7.6 b by end-2019.

The ISB settlement of $ 500 m on 18 January 2022 was a Parliament-approved budgeted debt repayment that accounted for about 7% of the Government’s forex debt-servicing and about 2.3% of the total debt-servicing in 2022. In that regard, some persons have stated that Sri Lanka should not have serviced its sovereign forex debt, particularly the maturing ISB of $ 500 m and had even claimed that the settlement of the maturing ISB was done at the behest of top officials and politicians including this writer in order to enable certain unspecified investors to make undue profits. In their haste to place blame on specific officials, they had even ignored the fact that about 16% out of the total ISBs outstanding in January 2022 of $ 13,000 m was reportedly being held mainly by Sri Lankan banks and other investors, and that a default by the Government of these ISBs would lead to the serious destabilisation of the entire Sri Lankan banking system.

Accordingly, while refuting the preposterous claim that the country was facing bankruptcy as a result of the settlement of the ISB, it must be categorically stated that Sri Lanka actually averted bankruptcy by settling the ISB. In any event, it must be noted that a decision to default by a country is so serious that it should properly receive the formal prior approval of the Monetary Board of the Central Bank, the Attorney General, the Cabinet of Ministers, as well as Parliament, and not be carried out according to the whims of a few officials.

It must also be noted that the repayment exercise is dependent not just upon the quantum of the available funds in hand, but on the funds inflows and outflows, as well as the roll-over of debt, which is dependent upon public confidence. Therefore, it is vital that the authorities ensure public confidence in the financial system and carefully arrange the cash flows. If the only criteria for debt repayment was the availability of liquid funds in possession, it would have not been possible to manage the debt repayment programs of the Government over the past years.

The controversial “debt default” announcement on 12 April 2022 pushed the country into default, and it is seriously suspicious as to why that was done when the “pipeline of inflows” at that time amounted to $ 10.7 b, a list of which has been submitted to the Supreme Court via my “affidavit” dated 15 July 2022 in connection with a Fundamental Rights petition. Accordingly, there was absolutely no necessity for the hurried, inexplicable and highly suspicious “debt default” of 12 April 2022, which was announced without the necessary formal approvals.

Negotiations were also at an advanced stage on “lines of credit” of $ 1 b for goods and $ 500 m for oil from India, and $ 500 m (approximately) from the Reserve Bank of India through the postponement of Asian Clearing Union settlements.

The sudden “default” announcement of 12 April 2022 completely disrupted the above expected inflows, while the non-payment of the July 2022 $ 1,000 m ISB led to a “cross-default” fall-out as well.

Since December 2020, then CB Governors Professor W.D. Lakshman and this writer as well as former Treasury Secretary S.R. Attygalle had secured and arranged the required forex inflows to settle or roll-over maturing debt. This was done while allocating forex to buy fuel, coal, medicine, gas, foodstuffs, and to clear the containers of imports, even though there were a few delays due to exporters and expatriates holding back forex receipts and importers attempting to stockpile imported goods. The Government also serviced all maturing forex debts in the first quarter totalling $ 3.1 b. Thereafter, in the next 3 quarters, forex debt servicing was comparatively easier, at $ 3.9 b only, of which, the settlement in the second quarter was around $ 1.0 billion only.

The settlement and expected roll-over of those amounts were comfortably manageable with the inflows expected from the 25% export conversions to be mandatorily sold to the Central Bank by the commercial banks, the roll-over of maturing SLDBs and FCBU loans being arranged as in the past, and the expected substantial new cash inflows from China, India, “Green” Bonds and other non-debt sources.

If local debt is restructured, it could lead to serious socio-economic consequences. Issue of Treasury Bills to the Central Bank increases. The local currency loses value. The Government’s local currency payments, including salary and pension payments, are stressed. The country’s foreign policy is compromised. In a nutshell, grievous prejudice is caused to the economy and the country. Sadly, almost all the above outcomes are being experienced in Sri Lanka already.

Further, if a “hair-cut” of 40% (as being mentioned in Government circles) is applied on the ISBs, that would mean that the nine Sri Lankan banks who reportedly hold around $1,750 million of Sri Lanka’s ISBs collectively would stand to suffer a loss of 40% of that value Rupees, which works out to over Rs. 250 billion. According to Central Bank data, the total Domestic Debt at end September 2022 was around Rs. 13,900 billion. As is well known, the bulk of this Debt is held by the Employees Provident Fund, Employees Trust Fund, Bank of Ceylon, People’s Bank, National Savings Bank, private banks and insurance companies. In that background, if the IMF and Debt Restructuring “Advisors” insist on a “hair-cut” of even 20% of the Domestic Debt to fulfil the IMF’s “Debt Sustainability” requirements, that would amount to a huge write-off of over Rs. 2,750 billion! Obviously, that would be a massive shock that the Sri Lankan banking and financial sector would not be able to afford or withstand. 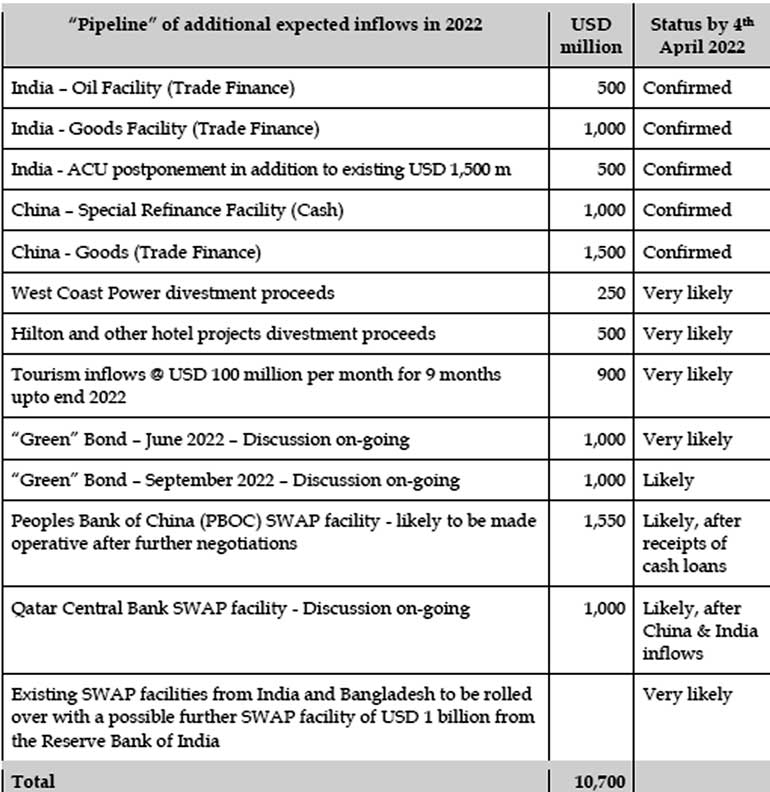 Your Editorial states the economic collapse was precipitated “in no small measure by the Central Bank’s highly questionable decisions to maintain an artificial exchange and burning the precious foreign currency reserves”. In response to that allegation, it must be categorically stated that not one single dollar was used (or burnt as alleged by you) by the Monetary Board “to maintain an artificial exchange” during my second term of just over six months. In direct contrast, at the Government’s request, approximately $ 1.8 b was supplied by the Central Bank to purchase food, fuel, medicine, coal, gas, etc. that was urgently needed, while about $ 2.0 b was provided to keep the BOC and People’s Bank solvent. Further, in relation to the Monetary Board’s decision to maintain a “stable currency” during that same period, it must be stated that if the Rupee had been “floated” as demanded by some opposition MPs and others while the COVID pandemic was at its peak, and the Rupee had depreciated to around Rs. 300 or Rs. 350 per $ at that time, that would have resulted in a serious panic and instability. If so, these same politicians and others would have then taken a completely different attitude and blamed the Monetary Board saying that the decision to “float” was reckless.

Even though many don’t seem to be ready to acknowledge, Sri Lanka had secured forex “bridging finance” inflows of around $ 5 b from 2020 to end-March 2022 from bi-lateral sources, without any tough conditions or burdens being imposed on the people. Of that sum, about $ 3.8 b was obtained during my brief 6½ months as Governor.

If, as some argue today, Sri Lanka had sought IMF assistance without obtaining such funding, it is likely that not a single dollar would have been forthcoming from the IMF or from any other source during those 6½ months. In fact, by 31 October 2022, it’s more than 7½ months after seeking IMF assistance, and Sri Lanka has not received any funding whatsoever from the IMF, or from any other bilateral lender! Needless to say, Sri Lanka’s plight would have been disastrous if that had happened, and if so, everyone would have probably found fault with the authorities and demanded to know as to why the Government had sought an IMF program for the 17th time, instead of securing funds from bi-lateral sources.

You have stated: “A handful of individuals are responsible for the economic collapse of the country. They must be held accountable for the misery they have caused. A thorough investigation into their corruption, incompetence, dereliction of duty and negligence should be carried out immediately”. In assessing such “incompetence, dereliction of duty and negligence”, I am sure the International Monetary Fund (IMF) Article IV statement of 2 March 2022 could serve as a very useful reference point. In that report, the IMF categorically states Sri Lanka had “inadequate external buffers” and was “vulnerable” at the “eve of the pandemic”.

As you know, the new Government took office around end-2019, which then means the Sri Lankan economy was already “vulnerable” and with “inadequate external buffers” at the time it took office. Such “vulnerability” had therefore obviously arisen mainly through the rapid accumulation of ISBs and equally rapid dissipation of forex reserves during the tenure of Finance Minister Mangala Samaraweera, Governor Indrajith Coomaraswamy and Senior Deputy Governor Nandalal Weerasinghe. Hence, a thorough investigation is warranted at which the latter two officials could explain how and what caused the Sri Lankan economy to be so “vulnerable” by end 2019.

The IMF Article IV Report of 2 March 2022 also specifically states that “Sri Lanka lost access to the international sovereign bond market at the onset of the pandemic”. That meant that there were no opportunities to issue new ISBs in the wake of COVID-driven inactivity in the global bond markets by the time the new Government took office. That fact too, has been ignored by many critics when assigning blame to the post-2019 administration.

In this context, I have, on 5 September 2022 urged the President, to initiate an impartial High-level Inquiry to identify those persons who are responsible for the heinous economic crime of leading the country towards financial vulnerability and thereafter announcing an unwarranted “bankruptcy”, since such persons definitely “must face justice” as urged by you.