For years, Sri Lanka’s Rajapaksa dynasty ruled the island nation with an iron fist, striking fear into political opponents, journalists and other perceived threats to their power. Now protesters are chasing them out of their homes, and out of power.

President Gotabaya Rajapaksa, 73, is set to resign on Wednesday after months of street protests over surging prices and shortages of basic goods such as food or petrol. After spending his time holed up at his official seaside residence, protesters shouting “Gota Go Home” forced him to flee on Saturday while breaching the gates of the compound in dramatic scenes.

The unrest showed the public fury at Rajapaksa, whose three-year adminisration has left Sri Lanka pleading for cash from the International Monetary Fund and nations like China and India after defaulting on foreign debt for the first time since independence from Britain in 1948. Bondholders are also furious: One last month named the Rajapaksas in a lawsuit seeking more than $250 million in unpaid debt — the first of potentially many others.

Yet it wasn’t only demonstrators that wanted Rajapaksa out of office: Even other members of his family saw him as a lame-duck leader. And one in particular, his 36-year-old nephew Namal Rajapaksa, has already been thinking of how the dynasty can restore its reputation over the long term even as the increasingly violent protests had some observers wondering if the whole family would be forced into exile.

In a recent interview at the ruling party’s office in Colombo, which was vandalized by a mob during the May 9 violence, Namal said that Gotabaya “should complete his term and then go.” He described the family’s current predicament as a “temporary setback,” adding that the goal now was “to provide as much stability as we can to address the basic needs of the people, and in the meantime work on long-term strategies.”

Namal is the eldest son of Mahinda Rajapaksa, 76, the current president’s brother who previously held the top job from 2005 to 2015. With Gotabaya as his defense minister during that time, Mahinda crushed a three-decade insurgency from Tamil rebels using brutal tactics that prompted widespread concerns about civilian deaths. At the same time, the brothers sought to crush political opposition and racked up billions of dollars worth of debt, mostly to China.

Although the Rajapaksas lost power in a dramatic 2015 election, they came roaring back four years later —  with Gotabaya as president and Mahinda as prime minister. But a series of policy blunders combined with the pandemic soon brought about food and fuel shortages that triggered mass protests, eventually prompting Mahinda to step down as prime minister in May.

That decision drove a wedge between the brothers, according to people familiar with the situation, who said that Mahinda for weeks had resisted Gotabaya’s calls that he step aside before relenting. Of the six Rajapakas in the cabinet at the start of the year, Gotabaya was the last one standing — and he’ll soon be gone.

The tensions between the brothers reflects their different leadership styles, according to Paikiasothy Saravanamuttu, executive director of the Centre for Policy Alternatives, a Colombo-based research group.

“Mahinda is a populist politician who the people still love,” Saravanamuttu said. “But Gota is a much more reserved, introverted person, and has no experience in governance.”

Whereas public sparring had once been rare for the Rajapaksas, now they are pointing fingers at one another.

In an interview last month at his official residence now occupied by protesters, Gotabaya acknowledged that sweeping tax cuts and a fertilizer ban implemented shortly after he took office didn’t work. But he characterized those misfires as collective ones, and said his push for a bailout last year from the International Monetary Fund but was rebuffed by advisors and relatives until protests got out of hand.

“I didn’t get the support or proper implementation from people who were responsible,” Gotabaya said, adding that he wouldn’t stand again for the presidency after his term expires in 2024. 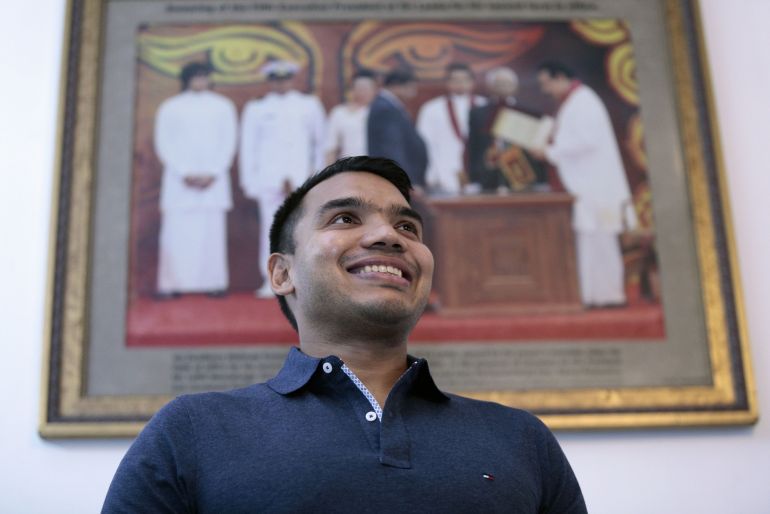 Namal said his father disagreed over whether to implement sweeping tax cuts and urged Gotabaya not to go ahead with an ill-timed ban on synthetic fertilizers. “Had my father been the president, he would have never taken that decision,” Namal said. Mahinda didn’t respond to requests for comment.

No matter who is responsible, the Rajapaksas are facing a record low and are in need of a rebrand. And Namal is positioning himself as the main person from the next generation to take the mantle.

During the interview, Namal spoke in a measured, calm voice like a seasoned politician. A fan of bodybuilding, the former sports minister wore a short-sleeved shirt that left part of his biceps visible.

Namal made clear that his policies would be more in line with those of his father than his uncle. Sri Lanka’s problem, he said, was that it deviated from a plan to turn Sri Lanka into a manufacturing and transshipment hub. He also saw a need to upgrade airports to attract more tourists and improve agricultural output so the country had ample supplies to feed itself.

He acknowledged his family’s history in the halls of power but also said he doesn’t believe in “dynastic politics.”

“My father started 55 years ago from Hambantota, I started five years ago — it’s a long journey in politics,” Namal said. “This is a rough patch, so face it and move forward.”

In Hambantota district on the southern coastline, the family’s base of power for decades, the political fate of the Rajapaksas remains in question. Armed soldiers patrol outside their sprawling ancestral bungalow, which was reduced to burned-out rubble in May. Locals also destroyed a museum built in the family’s honor, vandalized their tombs and toppled a gold-plated statue depicting a family hero.

The family’s connection to Hambantota stretches back decades. D.A. Rajapaksa, Mahinda and Gotabaya’s father, was a prominent lawmaker. Relatives have homes scattered across the district. Nuan Sameera, 60, a farmer from the village of Hukura Wallya, recalled fondly how Mahinda used to frequent a nearby temple and mingle with locals.

“They are part of us,” Sameera said, even as he criticized the Rajapaksas for the shortage of food and fertilizer.

Rajapaksa critics associate Hambantota with the clan’s extravagant spending habits. An international airport built a decade ago in their name is devoid of passenger flights. A sprawling cricket stadium hardly hosts international matches. And cargo ships barely dock at a $1 billion port constructed with Chinese money.

Even so, Mahinda remains popular in Hambantota, a largely agrarian district set amidst watery rice paddies and coconut trees. Sunil Rajapaksa, a farmer who isn’t related to the family but lives near one of their houses, said he wouldn’t be surprised if Namal leads the dynasty into a new era.

“If Bongbong Marcos could come back, why not the Rajapaksas?” he said, referring to the son of a former dictator who just won the presidency in the Philippines. “It’s just a matter of time before people realize that the Rajapaksas worked to better the country.”

Namal is clear about one thing: He has no plans to flee Sri Lanka no matter how bad things get.

“We will never leave the country — it will never happen,” he said. “If the people don’t want us, they have the ballot — not the bullet.”