Colombo, Sri Lanka – Velu Anna Lechchami, 49, from Ratnapura village, about 100km (62 miles) from Sri Lanka’s main city of Colombo, is thankful for the smallest job she gets.

If she or her husband find work to clean, cook, or pluck tea leaves, they will be able to put food on the table that day. But with a catastrophic economic crisis in Sri Lanka, work is scarce and if they find something to do, getting to work is another challenge.

Sri Lanka restricted the sale of fuel on Monday, providing it only for essential services till July 10. The desperate move was taken as the island nation has run short of foreign currency to buy fuel.

For Lechchami, this means less work. There are days she just survives on a cup of plain tea with some sugar. On other days, she survives by boiling the jackfruit offered by her neighbour.

“There is no other option for us. We must work to buy food for the day. We are trying to survive. There is nothing else to do,” she told Al Jazeera.

Sri Lanka is facing its worst economic crisis in more than 70 years, with its economy shrinking by 1.6 percent in the first quarter of this year, according to official data.

The country has defaulted on its $51bn foreign debt and is now holding bailout talks with the International Monetary Fund (IMF).

Inflation hit a record 45.3 percent last month while the rupee depreciated more than 50 percent against the dollar this year. The shortage of foreign currency required to import fuel, fertiliser and other essentials has had a devastating effect on the country’s economy.

Protesters have been demanding the resignation of President Gotabaya Rajapaksa over the government’s handling of the crisis for months. The other two powerful Rajapaksas – Prime Minister Mahinda Rajapaksa and Finance Minister Basil Rajapaksa – have resigned.

‘We are done for’

The economic crisis has forced people across the island to stay in queues for days to buy essential goods such as fuel and cooking gas. 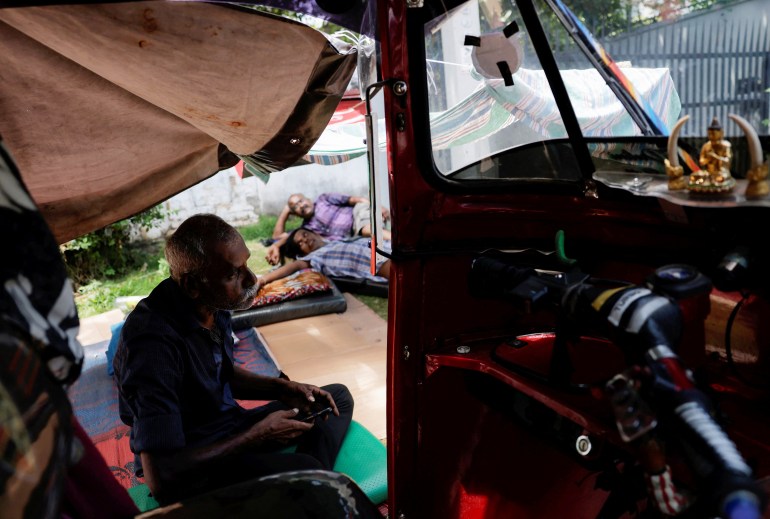 People wait under a temporary tent in a queue after receiving tokens to buy petrol due to fuel shortage, in Colombo, Sri Lanka [Dinuka Liyanawatte/Reuters]

Security officials have been deployed at fuel stations to control the crowds.

In a bid to end the fuel crisis, power and energy minister Kanchana Wijesekara on Tuesday tweeted the government will allow import and retail sale of fuel to companies from the oil-producing nations.

Authorities also introduced a token system this week to stop people from queueing at filling stations. However, it has caused more chaos.

Kadireshan Selvachandran, 35, an autorickshaw driver working in Colombo, has been in a line to buy fuel for three days. He spent the last two nights in his vehicle, hoping he would be able to buy enough fuel to last a day. He did not get the token.

Selvachandran is determined not to leave the queue till he gets fuel. 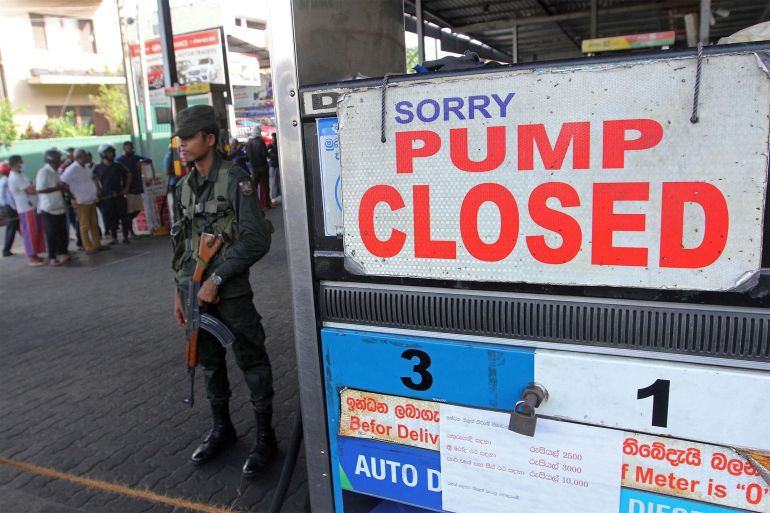 Experts say the talks with the IMF could result in some drastic and deep-reaching structural reforms.

Political analyst Dr Aruna Kulatunga told Al Jazeera some of these reforms may include removing the duopoly in the energy sector, ending import restrictions, increasing income and indirect taxation and privatisation or selling of unproductive “white elephant” state-owned enterprises.

A repealing of the Paddy Lands Act, which bars development and even other agricultural work in abandoned paddy lands, is also on the table along with the transfer of non-productive state-owned lands to farmers and former estate workers, he said.

“This is a double-edged sword. On one side one can assume serious job losses while on the other hand, deep-reaching social reforms like land redistribution and allowing productive use of abandoned paddy lands will increase the bottom lines for many of the marginally affected people,” Kulatunga told Al Jazeera.

For Lechchami from Ratnapura, however, it is a long wait while having three meals a day has “become a luxury” for her. Experts warn that one of the long-term effects of the economic crisis could be chronic malnutrition for generations to come.

The United Nations World Food Programme says 22 percent of Sri Lanka’s population is “food insecure and in need of assistance”. The country’s Medical Research Institute (MRI) has launched a survey to look into the malnutrition status of the people.

“Malnutrition in the pre-economic period was high. Now with the economic crisis, it will definitely go up,” Dr Renuka Jayatissa, a nutritionist at MRI, told Al Jazeera.

Lechchami says the cost of most food has tripled from what she paid last year. The longer the government takes to ease the crisis, the worse it will get for her family.