However, Sri Lankans are paying a high price for the government’s poor management, cronyism, and lack of accountability, which went unchecked for decades, as food prices rise amid an approaching worldwide food scarcity brought on by the conflict in Ukraine.

As the economic situation worsened, the family was obliged to use a firewood stove, and Nethmi Rajawasam’s hopes for the future seemed to vanish in a puff of smoke. 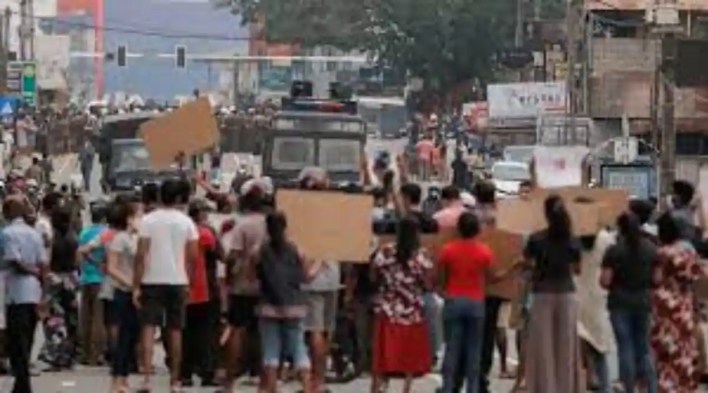 The Rajawasams utilized cooking gas cylinders, a kitchen needs that everyone took for granted, to prepare their meals, like the majority of urban middle-class families in Sri Lanka. That was, however, before the island nation in South Asia experienced its biggest financial crisis since gaining independence in 1948.

As the government’s foreign reserves depleted, it was unable to import food, medicine, cooking gas, and other fuels. Both the length of the lineups at filling stations and the regular power outages increased. An electric stove was not a practical or inexpensive alternative because there was no fuel to power generators.

And so, in a suburb of Colombo, Sri Lanka’s capital, the family went back to cooking in the per-industrial era by setting up a clay wood-burning stove on a small cement slab outside their home. 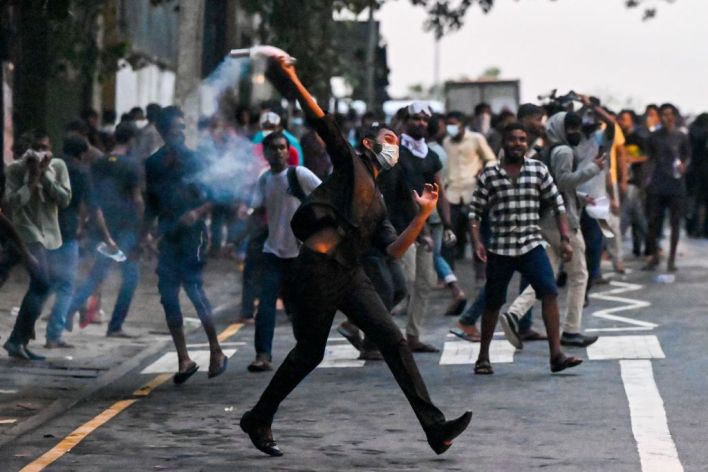 The 21-year-old freelance writer, who lost her full-time job after her news website ran out of donor money, said, “Cooking on a wood stove is a tiresome effort. Rajawasam currently juggles two to three jobs at once, primarily writing copy. This means that her mother must do the majority of the cooking.

During the crisis, her parents also lost their employment. Rajawasam notes that because they are both in their mid-50s, the economic downturn makes it unlikely that they would be able to find new work in the private sector.

In a phone chat that was constantly interrupted by power and telephone outages, the young freelancer revealed how she had become the family’s primary provider of income. Rajawasam remarked matter-of-factly, “We have to work to earn our food.

However, the family dinners are now in jeopardy. We used to eat bread instead of rice for at least two of our meals because it is lighter and doesn’t require cooking, she said.

According to the most recent government statistics, Sri Lanka’s inflation reached a record high of 45.3% in May. While transportation expenses increased by 76.7 percent and food prices increased by 58.0% in May, respectively, today, vegetables like cabbage, cauliflower, and carrots are seen as luxury foods by many middle-class families.

To offer public sector workers more time to raise their food, the government has promised a shorter work week: The right to a paid “Farming Friday” off is granted to almost 1.5 million public sector employees. The UN had warned last week that four out of every five individuals in the 22 million-person country were now compelled to skip meals.

Sri Lanka is a cautionary story of what may happen to nations that are already chronically mismanaged, amid concerns of an oncoming worldwide food crisis caused by Russia’s continuing blockade of Ukrainian ports, which prevents millions of tonnes of grain from being sent to global markets.

According to a spokesperson for the Russian foreign ministry, US and EU officials have accused Russia of “weaponizing food,” but Moscow insists that the situation is “the responsibility of Western governments, who operate as provokers and destroyers.”

The Sri Lankan crisis illustrates the dire social consequences of food shortages as the nation struggles with instability and growing misery for large segments of the people who are sinking into poverty, while Western and Russian authorities trade accusations.

After months of delays caused by the government ignoring recommendations for an IMF intervention from experts and opposition parties, the Sri Lankan government this week started negotiations with a visiting team of IMF officials. 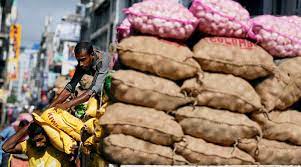 On Monday, the nine-person IMF delegation met with Prime Minister Ranil Wickremesinghe to discuss how to set up Sri Lanka’s 17th loan program with the international lender.

As public anxiety about the catastrophic economic situation grows, lengthy negotiations are anticipated. Police reported making 21 arrests on Monday for obstructing the entrance to the finance ministry, which is next to President Gotabaya Rajapaksa’s office, and where protestors have been staging a sit-in since early April.

“Gota goes home” shouts have become a rallying cry on the streets and on social media as protesters have been demanding Rajapaksa’s resignation for months. The protest, which has been called “GGG” for Go Gota Gama (“gama” being the Sinhalese word for village), has united Sri Lankans from different parts of the country in terms of geography, ethnicity, and religion.

After Rajapaksa supporters attacked tens of thousands of anti-government protestors last month, the number of demonstrators at the sit-in outside the presidential office in Colombo decreased. Smaller protests, meanwhile, have broken out throughout the nation, including “kitchen laments” in neighborhoods where people congregate to beat pots and pans in impromptu shows of unhappiness.

Rajawasam first took part in large-scale demonstrations in Colombo’s downtown, but after the crackdown, she claims she doesn’t have the time or resources to join the sit-in. She spoke from her home in Athurugiriya, a neighborhood some 18 kilometers east of the Sri Lankan capital, saying, “I don’t travel to Colombo anymore, it becomes exhausting.

There are much more expensive bus tickets and fewer buses on the route today. There used to be a bus going to Colombo every ten minutes; now there is just one, and when it does, people are hanging out the doors.

The protests are shrinking even as the situation worsens because Sri Lankans are straining to make ends meet.

At the Gota Go Gama demonstrations, “there has been a depletion of numbers,” according to Ambika Satkunanathan, a former commissioner of the Sri Lankan Human Rights Commission People is unable to demonstrate because they are struggling to satisfy their fundamental requirements.

But she pointed out that several protests were taking place in various locations. “The protests have been spontaneous, not orchestrated or directed by political parties, and they have taken on a variety of forms, but they are all directed against the dictatorship. The president’s resignation is frequently demanded.

How to cause an economic collapse

The Rajapaksas, a potent political dynasty that formerly held the president, the prime minister’s office, as well as the finance, interior, and defense portfolios, are mostly deemed responsible for Sri Lanka’s poor economic management.

Rajapaksa has presided over several populist initiatives that read like a checklist for how to spark an economic crisis since taking government in 2019 and appointing his brother, Mahinda, as prime minister.

Rajapaksa disregarded the advice and depleted the state’s finances shortly after taking office by enacting broad tax cuts that were part of his campaign platform. The strategically positioned island country in the Indian Ocean became a classic example for economists warning of a “Chinese debt trap” because of massive infrastructure projects funded by Chinese investment. 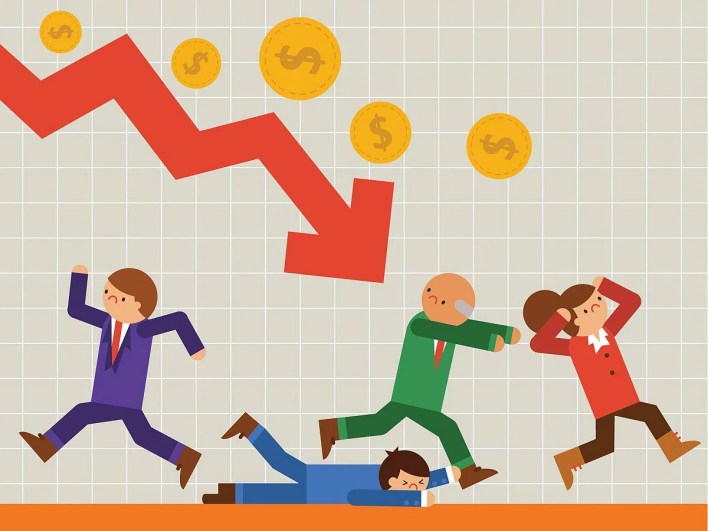 The government subsequently enacted a general ban on artificial fertilizers, decimating Sri Lanka’s crucial agricultural industry while the president’s nephew served as agriculture minister. The government was unable to pay for food imports as foreign reserves shrank, even the national staple of a nation that was previously self-sufficient in rice production.

Experts and opposition lawmakers pushed the administration to start IMF bailout negotiations when the epidemic hit. However, the Rajapaksa administration remained in place and awaited the tourist sector’s post-pandemic recovery until a new finance minister, appointed in April, formally requested assistance from the IMF.

The Rajapaksa dynasty is currently on the verge of collapse following months of demonstrations. The “clan head” of the Rajapaksa family, Mahinda Rajapaksa, resigned from his position as prime minister last month in response to the resignations of two brothers and two nephews from their cabinet positions.

But despite concerns about whether Rajapaksa is clinging to immunity privileges against numerous lawsuits over alleged human rights abuses during a harsh 2009 crackdown on the Tamil Tigers insurgent group when the current president was the defense minister, the president has steadfastly refused to resign.

The crackdown put an end to a civil conflict that lasted for decades between the Tamil Tigers, which were headquartered in isolated northern Sri Lanka, and the Sinhala Buddhist power base in the south, which is believed to have murdered 40,000 people. Civil war and the culture of impunity are “connected.”

Since the Rajapaksa family ascended to national power in the middle of the 2000s, majoritarian ethnic-chauvinism has characterized their rule.

The Rajapaksas portrayed themselves as legendary heroes facing off against “terrorists” and “extremists” from minority groups, including the Hindu Tamils and a minority Muslim community, through overt displays of Sinhala Buddhist symbolism, such as investiture ceremonies in sacred sites overseen by powerful monks.

“The basic reasons for the [civil] conflict and how succeeding governments handled them may all be related to the corruption, the steady erosion of public institutions, the centralization of executive authority, and the culture of impunity. We got here because successive regimes were allowed to commit egregious human rights breaches without consequence, according to Satkunanathan.

The majority-Sinhalese electorate was not alarmed by the transgressions, which included crackdowns on the opposition. “In this country, the only civic duty we associate with citizens is voting. Citizens have never demanded accountability from the government, according to Satkunanathan.

“In a way, the Sri Lankan people have finally realized what their responsibility as citizens in a democracy should be. Accountability is becoming increasingly necessary, and requests for it are growing.

The recent anti-government protests are the majority-Sinhalese population’s first significant mass protests. Since then, Sri Lankans from various backgrounds and communities have joined them, uniting, for the time being, in their anger over the economic catastrophe.

Deep enthrone legions’ conflicts in Sri Lanka remain unresolved, despite the desire of many participants of the dispersed, leaderless protest movement to emphasize the value of togetherness.

A concerning development occurred on Tuesday when a former minister and parliamentarian from Sri Lanka cautioned a small Tamil opposition party “not to try the patience of Buddhists” in a speech to the legislature.

Satkunanathan immediately issued a warning on Twitter in response to the remarks made by lawmaker Sarath Weerasekera. She tweeted that it demonstrated how a discredited administration “is once again trying to stir communism to hide from their failures.”

In the meanwhile, a record number of Sri Lankans have migrated, and passport offices have seen long queues of people waiting to apply for the documents that would allow them to exit the situation as it worsens.

According to the Sri Lanka Bureau of Foreign Employment, labor migration has surged by a record 286 percent since the beginning of the year, mostly to Gulf countries. Since unofficial or illegal departures are not included in government statistics, it is thought that the true numbers are substantially higher.

Rajawasam admits that she was obliged to give up her desire to pursue higher education overseas from her family in the Athurugiriya neighborhood of Colombo. Her younger brother’s tuition is currently being covered by savings from her first full-time work, and she said that given her present financial condition, the application fees for foreign colleges are out of reach.

She acknowledged that she and her country’s future did not appear promising, but the 21-year-old tried to avoid thinking about it. “The widespread consensus here is that we need to leave Sri Lanka, not that the nation will emerge from its predicament. I don’t like the idea of leaving, though; it’s quite difficult for students to leave Sri Lanka, she added.

edited and proofread by nikita sharma