Emigration has long been viewed as an indisputable avenue for lucrative opportunities, especially in the developing world. The Global South’s unabated search for a greener tract of grass, despite a recent deluge of instances of racial discrimination that Asians and others face abroad, only reinforces the dominant role of foreign remittances in the development of these nations.

From raising the standard of living in rural areas to developing monetary policy and igniting the financial markets at the macroeconomic level, the significance of these remittances in developing economies cannot be overstated.

According to an econometric study, worker remittances are the most statically significant factor that positively affects the economic growth of countries through channels of consumption and investment.

With more than 10 million labor migrants in various countries (primarily concentrated in the Middle East), Bangladesh is one of the top 10 countries in the world that receive the most remittances, accounting for roughly 7% of the country’s gross domestic product.

However, the Covid-19 pandemic dealt yet another low blow to the nation, disrupting the steady flow of foreign remittances because of a huge number of Bangladeshi migrants being stranded in nations with severe lockdown regulations.

Characterized by job losses and migration back home, the high hopes for remittances during the Eid-ul-Azha celebration in July 2022 were met with disappointment following a decline by about 15.12% year over year in fiscal 2021-22, to US$21.03 billion. 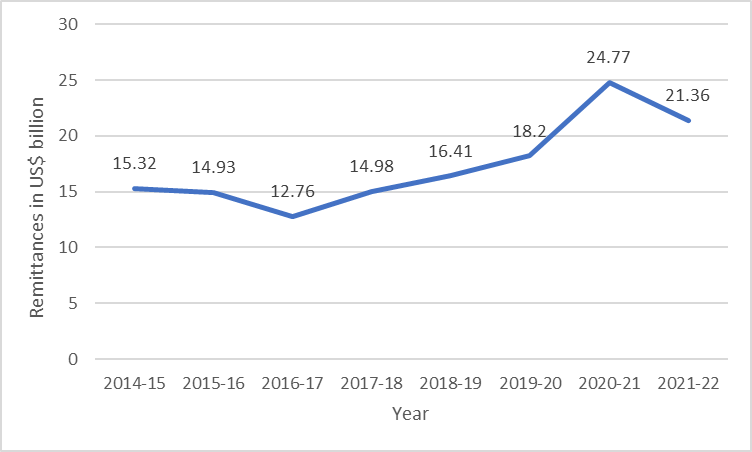 Previously known to cover Bangladesh’s current-account deficits, the dreadful state of this sector has not just worsened the balance of payments (BOP) but also decreased the country’s foreign-exchange reserves, weakening the Bangladeshi currency against the US dollar.

Considering the insubstantial fall in relative growth of the taka, the same cannot be said in the case of imports into Bangladesh. While an increase in the price of imports due to the depreciating value of the taka against the dollar would benefit the trade balance as a consequence of the government’s rejection of importing luxury goods, it would also exacerbate inflationary tendencies of the domestic economy as well as make domestic goods and import substitutes more expensive.

In September 2022 when the government attempted to modify the exchange rate – adopting a floating rate – in a bid to stabilize the home currency, all while the central Bangladesh Bank proceeded to liquidate its forex reserves, the move backfired. Foreign-currency reserves saw a dramatic reduction, falling from $46.39 billion in 2021 to $39.77 billion in July 2022, leading to a debilitating decline in returns to capital, thus worsening the country’s prospects for long-term prosperity.

Albeit known to have predated the Russia-Ukraine war that crippled the country’s ability to pay for imports amid rising prices in the crude-oil and food markets, Bangladesh’s bullet-riddled external sector has lately come under the spotlight for its eroding forex reserves and supply-side disruptions owing to the economic turmoil in the developed nations of Europe and North America.

Replete with deep fault lines threatening the food security of its 165-million-strong population, Bangladesh faces a predicament: to pay for its rising import bill that subsequently squeezes its foreign-exchange reserves or invest in the expansion of its emerging food and social-security programs. 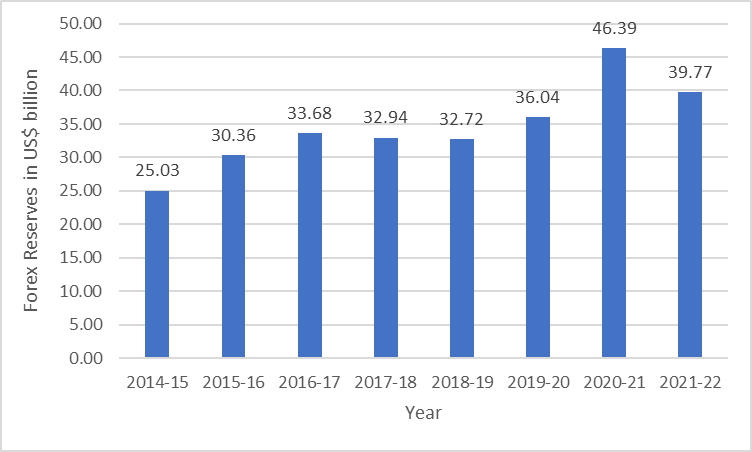 On the receiving end, however, are the poor who constitute nearly half of the population, pre- and post-pandemic. The lack of affordable basic necessities like fuel and food has added to the woes of these below-poverty-line citizens who, coupled with the absence of adequate social-security nets, are now compelled to make concessions with respect to their daily dietary needs.

In response, to quieten the growing uproar and unrest against the rising prices of essential commodities, the administration has opted to scale down some development projects, but little good has come out of this, for it has only deepened the fissures of economic growth in the country.

Besides stalling projects, the government has called for a reduction in needless spending, such as international travel by government officials, among other things, to conserve the nation’s resources.

Appearing in stark contrast, however, to the ostensibly precarious situation were Prime Minister Sheikh Hasina’s comments in August 2022. “Bangladesh would never turn into Sri Lanka, it won’t be,” she said with conviction. “We think in a pragmatic way before taking any development project [and so] the country will continue to move ahead overcoming all global challenges.”

Against a background of plummeting migration remittances, dwindling foreign reserves, and unstable food security, it is therefore imperative that the government urgently increase social protection measures for the most vulnerable groups who are affected by acute shortages in the availability of accessible subsistence commodities.

Given that the economic effects of the Covid epidemic have been disproportionately skewed against women and the poor, any macroeconomic restructuring in Bangladesh must therefore be driven by the fundamental principles of inclusive progress.