President Ranil Wickremesinghe emphasized that all should join together to solve the people’s food issues, casting traditional party politics aside.

The President made this observation addressing the public officers at an awareness program on the multi-sector mechanism to empower rural economic revitalization centers to ensure food security and nutrition at Hardy Advanced Technological Institute Auditorium in Ampara this morning (15).

The President further noted that no one would be allowed to starve despite the fact that the country is going through a very difficult time and pointed out the importance of successfully implementing the national food production program to prepare for a possible global food crisis in 2023.

The president also said that the agriculture modernization program would be implemented from next year concurrent to the food security program.

The implementation of the multi-sector mechanism to empower rural economic revitalization centers to ensure food security and nutrition in transforming the Ampara District also into a prosperous one with a blooming community was also discussed at length.

The Ampara district contributes 22 percent to the national paddy harvest and discussions were also focused on making the paddy cultivation in the Yala and Maha seasons a success.

It was also special feature that the President paid special attention to the issues faced by the government officials during the field work. The president was made aware of issues related to the agriculture and fisheries industry in the Ampara district and he directed the officials to address those issues. He also instructed to appoint a special committee to study those issues and report to him.

Following the discussion, the President made a scene visit to the Hardy ATI farm and planted a sapling to mark the occasion.

The statement made by President Wickremesinghe at the discussion at the Hardy ATI is as follows;

Ministry last year but this year we have left it to the companies. So those companies would provide the fertilizer.

One problem with regard to the fertilizer is that there are bills of Rs 8 billion from last year,due to companies which we have commenced settling. We have paid about Rs 4 billion out of it.

This is the first time such a program is implemented in Sri Lanka and as such a situation had not occurred in the country prior to this. Although food could not be brought in during the Second World War, the economy did not collapse. Now the economy has collapsed. This year the economy has recovered somewhat, in comparison to last year. But still there are issues. If we print money, the inflation rate would rise. There are limitations when dealing with the available money. Somehow, we should all come together to find solutions to these problems.

What the people need to do now is to commence the cultivation activities in their own areas and report it. Thereafter, our food security bureau will inform us about the types of food that we require more. There is no issue with paddy cultivation. If this season is successful, we will have an excess stock. Crops such as maize should be increased. I request you to obtain additional space for such crops and carry out the cultivation activities.

We are experiencing a difficult period and we must not allow anyone to starve for lack of food. As soon as the next Maha Season would be successful, we can move forward and we need to continue this program until the end of 2023. Even if our problem is solved, a global food crisis may arise, so we have to continue this program to ensure food security in our country Further, this food security mechanism does not stop there. While implementing the food security program, we will initiate the agriculture sector modernization program from next year. Accordingly, we have undertaken a new task and all are required to work together.

We don’t have party politics in this matter; traditional politics are useless in this endeavor. Put party politics aside. We need politics to solve the food crisis of the people. Let’s join this program. The production program should be commenced now and continue until April to get a successful harvest in the Maha season.

The first irrigation project that constructed after independence-the Gal Oya project by late D.S. Senanayake is in the Ampara district. Neither loans were obtained from anyone nor sought for assistance from anyone to construct it but with the rest of the money we had after granting a loan to England following the World War II we carried out the Gal-Oya project.

I expect the bulk of the country’s food requirement to be met from the Ampara District. I call on all MPs and organizers to unite, casting aside all political differences, in order to make this project a success. The Prime Minister and the Agriculture Minister will be visiting this area in the near future to inspect the progress of this project.

I am hopeful that you will all contribute to this project. We have never had to face the sort of challenges we face today. Neither have our parents or our grandparents had faced such a unique situation. If we identify the challenges before us and work accordingly, we can overcome them and forge ahead stronger than ever before. Hence, I request the assistance of everyone to make this endeavor a success. 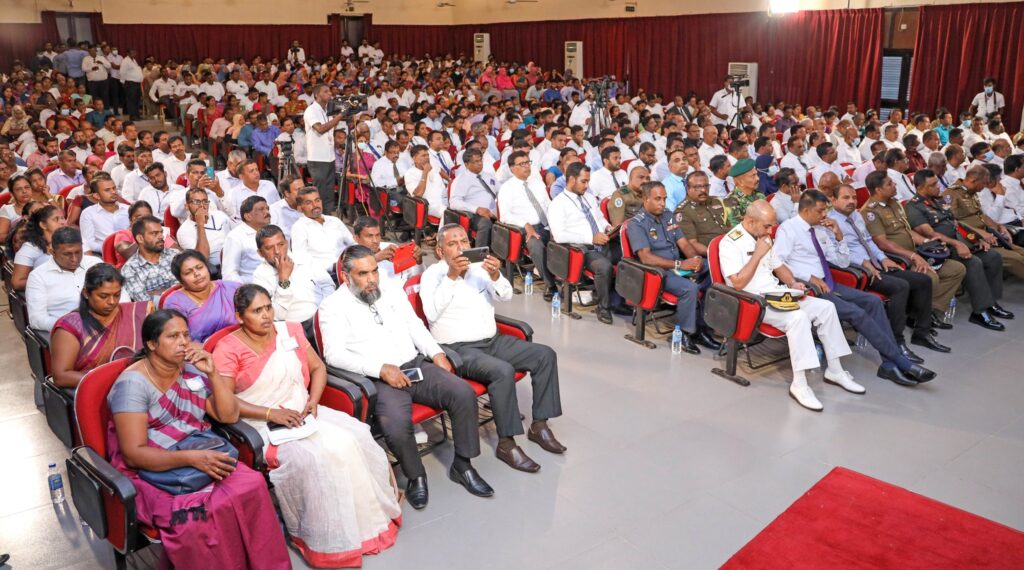 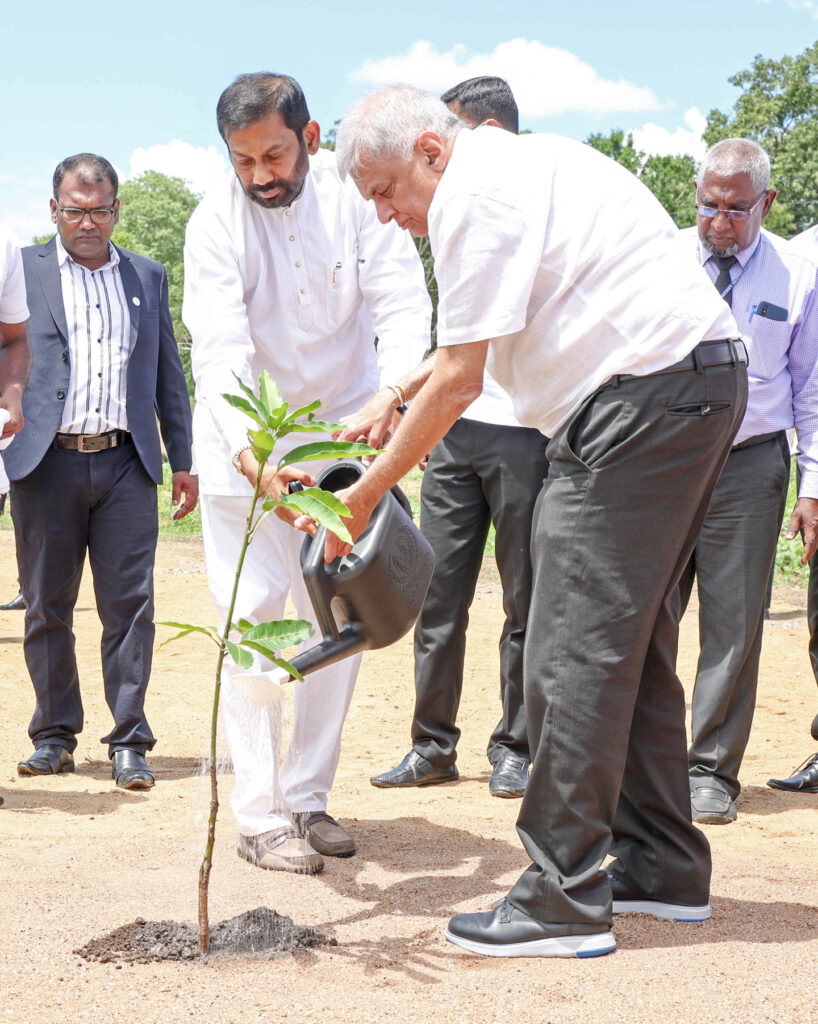 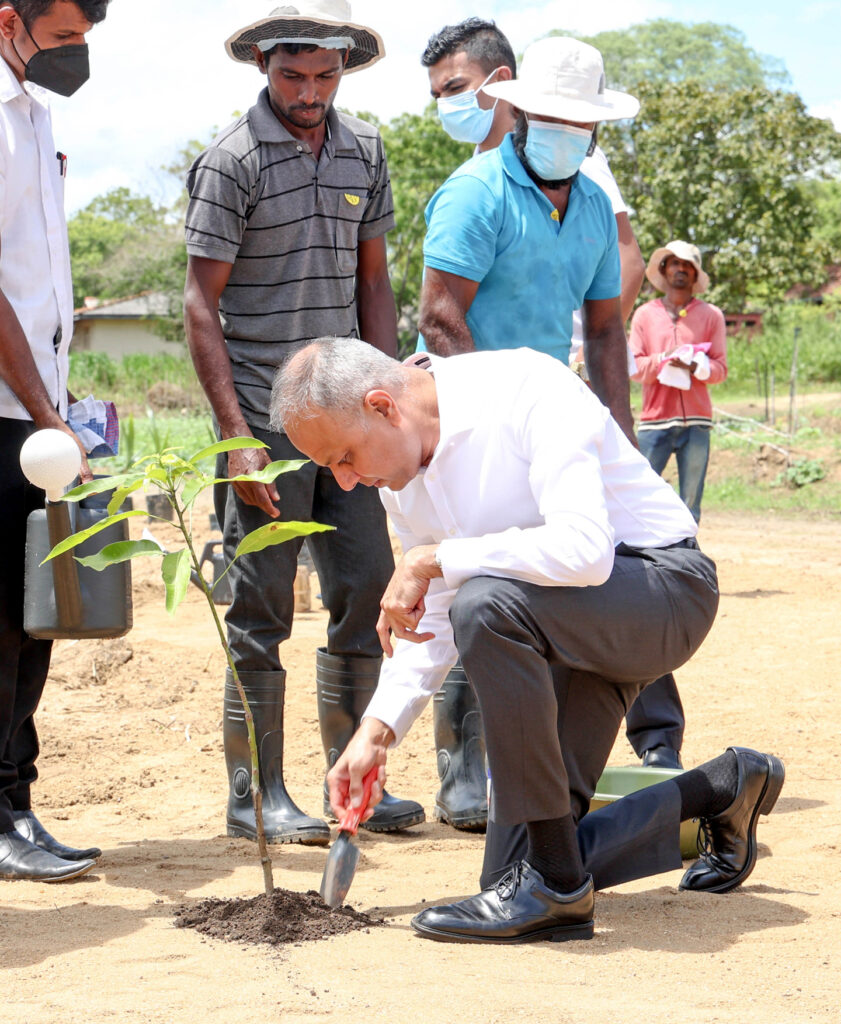 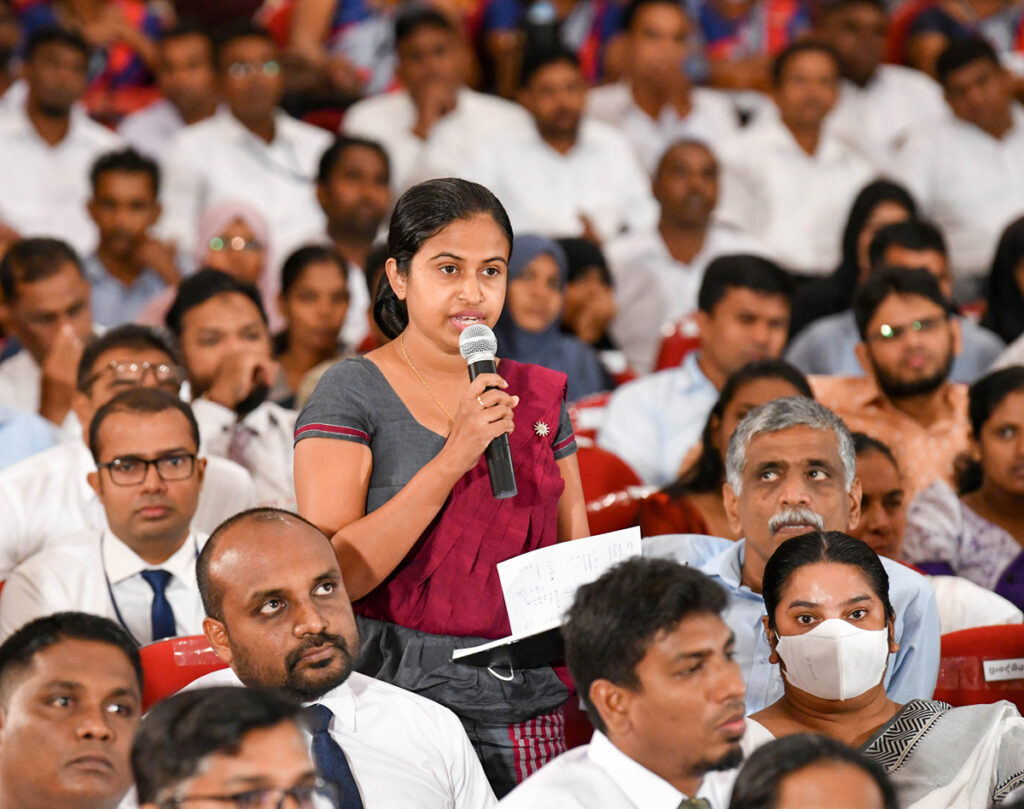 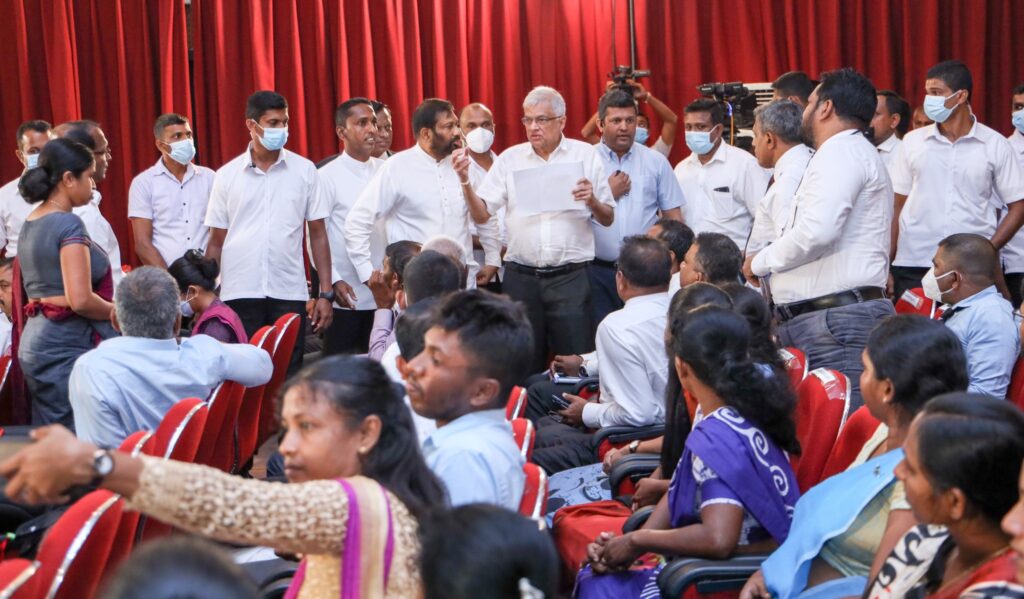 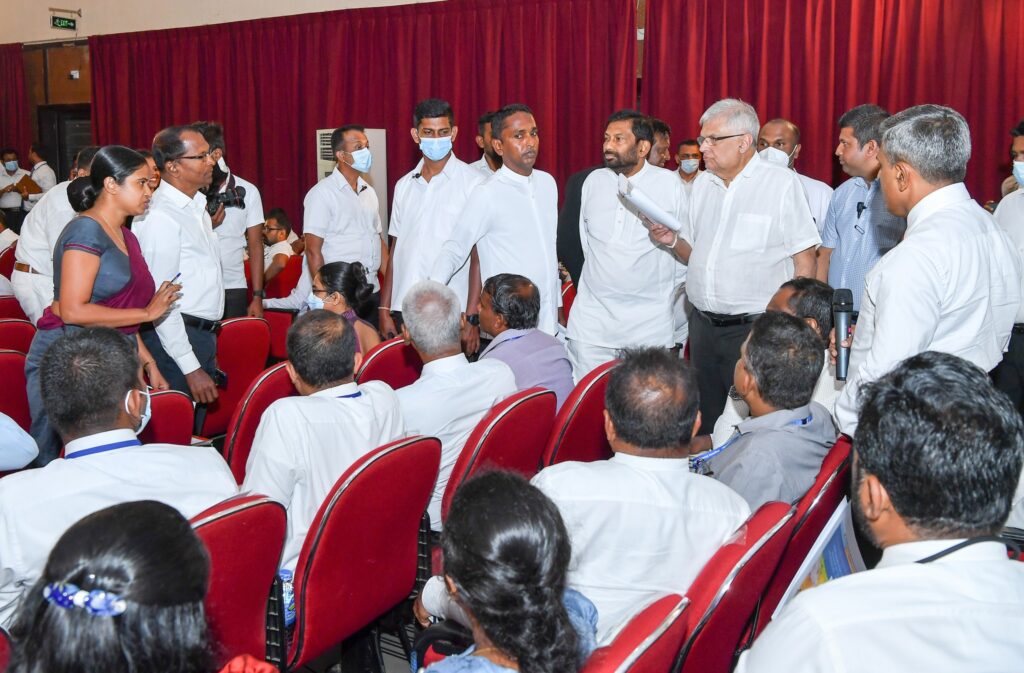 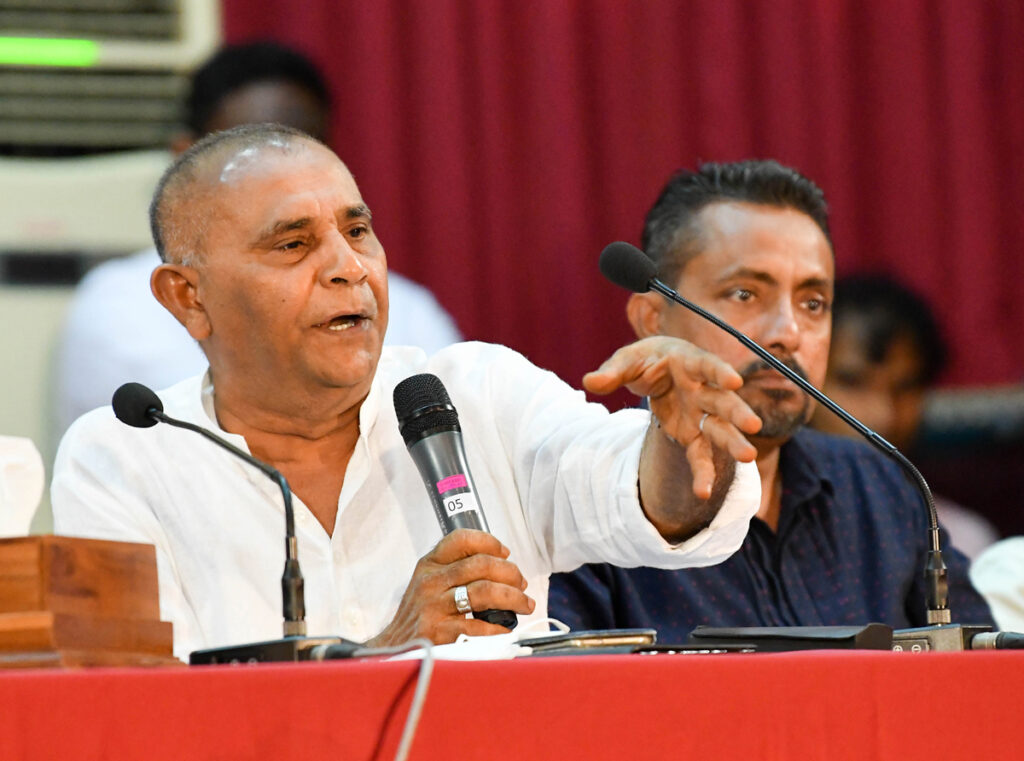