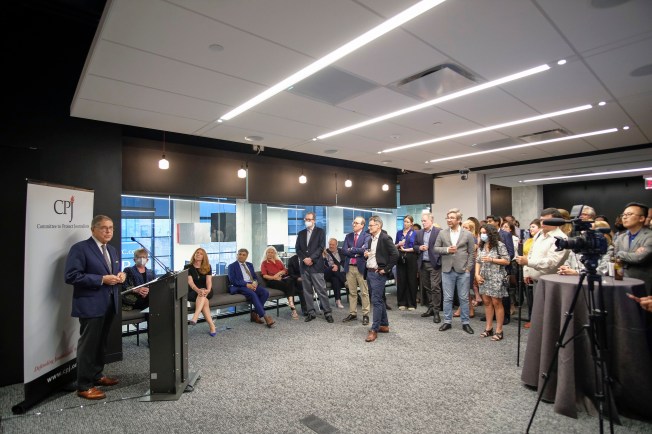 CEO of the John S. and James L. Knight Foundation Alberto Ibargüen speaks to CPJ supporters, staff, and friends at the grand opening of our new press freedom center in New York. (CPJ)

In early June, CPJ held its grand opening of The John S. and James L. Knight Foundation Press Freedom Center, the site of our global headquarters in New York. The new space will serve as a convening hub for press freedom advocacy and research. The center also houses the Reuters Photojournalism Gallery, a rotating exhibition of Reuters news photography.

The space is possible thanks to the incredible generosity of the Knight Foundation, Reuters, the Ford Foundation, Open Society Foundations, and many others who supported our campaign to secure CPJ’s future and ensure that, each year, more financial resources will be directed toward CPJ’s crucial programmatic work. 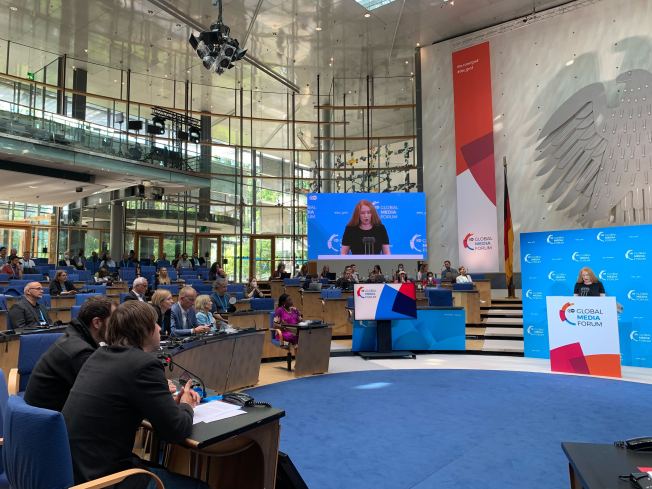 During an emotional ceremony, participants from around the world gathered to honor the work of two journalists from eastern Ukraine–AP journalist Mstyslav Chernov and freelance photojournalist Evgeniy Maloletka–who were given the 2022 DW Freedom of Speech Award for their international coverage of humanitarian atrocities in Mariupol, Ukraine. Additionally, among the conference participants were CPJ’s 2019 International Press Freedom awardee Patricia Campos Mello and our 2018 Gwen Ifill awardee, and 2021 Nobel laureate Maria Ressa opened the conference with a keynote speech.

Ginsberg presented the award to the Ukrainian journalists and discussed the importance of access to accurate, timely information: “In his account of the coverage Mstyslav has written that the absence of information in a blockade has two aims. The first is chaos: because people have no information about what’s happening, they panic, which means a once well-functioning social and civic architecture quickly collapses. The second is impunity: if there is no evidence of the crimes committed–the children killed, the civilian buildings flattened, then the aggressor can continue to act as they please. The role, then, of a journalist–in war as in peace–is to bear witness.”

"We were able to put the spotlight on some stories. But the scale of suffering is so unimaginably bigger that we both feel guilty for leaving the city and for not doing more… We’re planning to go back, the war is not finished," said Mstyslav Chernov & Evgeniy Maloletka. pic.twitter.com/FLS2XW3h7w

Recognizing this need for free and independent access to information, DW has also showcased a new fashion line in partnership with Berlin-based designer Marco Scaiano with proceeds supporting CPJ.

In the Uncensored Collection, “each garment includes instructions for tools to help people circumvent censorship and access independent media.” A scannable QR code on the sewn hem tag of the garments gives options for accessing DW securely and anonymously using Tor Project’s “The Onion Router” or Psiphon, which DW has used for the past decade. For a location where a government may have restricted access to news, such as Iran or China, these tools could be lifesaving. CPJ is grateful to benefit from this exciting partnership with DW and to have participated in the 2022 Global Media Forum. 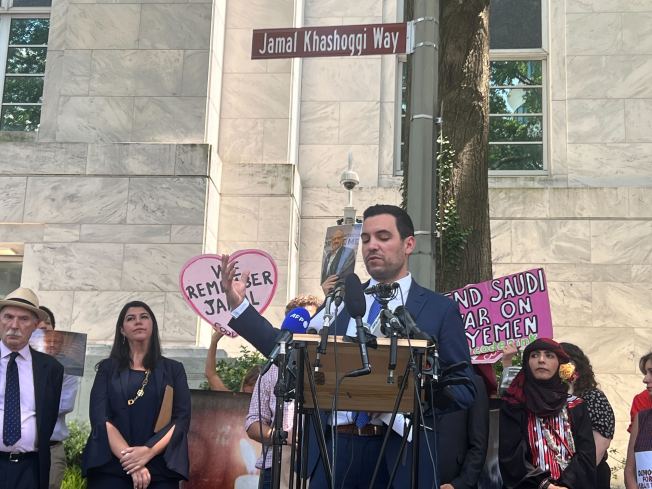 Four years ago, the Advisory Neighborhood Commission 2A, the neighborhood ward in which the Embassy of Saudi Arabia is located in Washington, D.C., asked CPJ’s U.S. advocacy manager Michael De Dora to speak in support of a resolution to rename the street in front of the embassy in memory of slain Washington Post columnist Jamal Khashoggi.

Doing so, De Dora remarked, would “raise awareness of [Khashoggi’s] murder, create a permanent educational marker for passersby, and serve as a daily reminder to the Saudi Embassy that U.S. residents reject their repressive tactics and strongly support freedom of the press.”

Years of advocacy work came to fruition as CPJ and Democracy for the Arab World Now (DAWN), a nonprofit founded by Khashoggi–along with other partner organizations–unveiled the new street signs in June. It was a critical moment in the effort to advocate on behalf of the murdered journalist, though more must be done.

As President Biden prepares for a trip to Israel, the West Bank, and Saudi Arabia, CPJ has called on the administration not to normalize the murders of journalists, which would betray the promises Biden and the U.S. Department of State have made to protect press freedom globally.

The film, which premiered at the Tribeca Film Festival and aired on June 28 on HBO Max, follows the journey of four journalists in Brazil, Mexico, and the United States as they face  increased distrust, misinformation, and brazen attacks from heads of state. The film captures the myriad challenges faced by journalists everywhere and the human toll of reporting the news and delivering on the public’s right to be informed.

In a letter to the Biden administration, CPJ is demanding a U.S.-led independent and transparent investigation of the killing of Palestinian American journalist Shireen Abu Akleh. CPJ President Jodie Ginsberg writes, “more than one month after Abu Akleh’s killing, only journalists have carried out serious probes of the incident.” Ginsberg also used the opportunity to remind Biden of his own words promoting press freedom on World Press Freedom Day and that his administration is not bound to the “norms set by previous administrations.”

Through a partnership with CPJ and other press freedom groups, a recent hearing of “The People’s Tribunal,”—which hosts a series of staged trials with real experts and real witnesses— included explosive new testimony from Nishantha Silva, a detective who says the Sri Lankan president was complicit in the 2009 killing of journalist Lasantha Wickrematunge. “It seemed obvious to observers,” CPJ Asia Program Coordinator Steven Butler writes, “as Wickrematunge himself pointed out just before he was killed, that only government officials would have had a motive to go after him.”

CPJ spoke with two reporters–Guillermo Contreras from the San Antonio Express-News and Zach Despart from the Texas Tribune–in the wake of the May 24 shooting at Robb Elementary School in Uvalde, Texas. The journalists detail how authorities’ efforts to impede the free flow of information have made it increasingly difficult to do their work. “To have police come along and tell us that you will get arrested for doing your job,” Contreras told CPJ, “that’s troubling to me.”

CPJ in the news

“How police treatment of journalists at protests has shifted from cohabitation to animosity,” Poynter

“Ukrainian photojournalists: ‘There is a lot that people don’t know about Ukraine’s war,’” DW

“‘Please leave. They’re going to kill you’: No freedom of the press in Russia,” Star Gazette