Home » Developing countries the worst affected by rising emissions from industrialised world, must be compensated: President

Developing countries the worst affected by rising emissions from industrialised world, must be compensated: President

Developing countries are the worst affected by rising emissions from the industrialised world, and must be compensated – President Ranil Wickremesinghe emphasises at COP 27 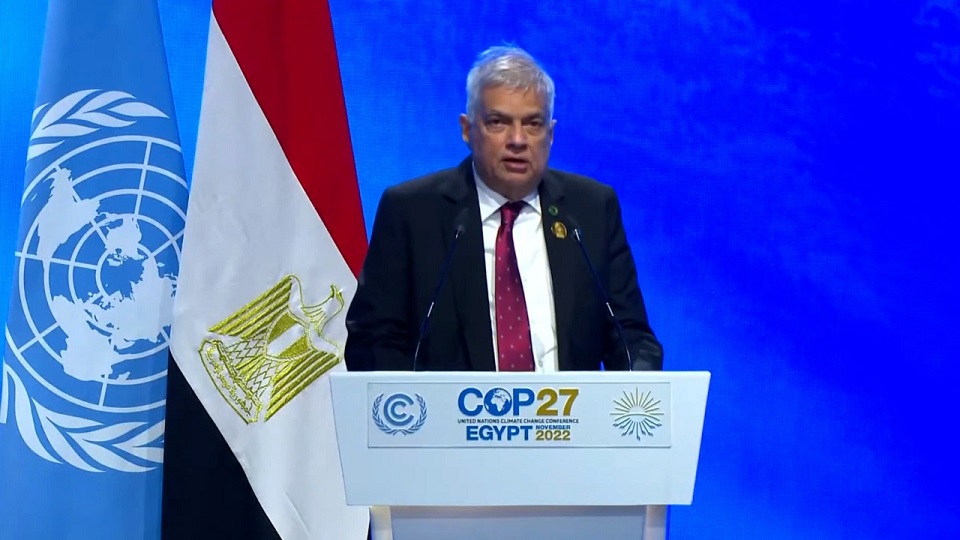 President Ranil Wickremesinghe addressing the COP 27 Climate Change Conference in Sharm El-Sheikh, Egypt said that unbridled industrialisation of the developed countries is the root cause of climate change, leaving the poor to suffer the consequences. He said that the problems facing poor countries are augmented due to the absence of adequate funding.

As a result, these countries are facing double jeopardy – struggling to develop economically while fighting to protect the living standards of their populations.

Therefore, President Wickremesinghe said that the developed countries must deliver on their pledge in Glasgow – by doubling their funding to compensate the developing countries for loss and damage.

Accordingly, he said that as proposed by the Climate Vulnerable Forum, commissioning a Special Report on this aspect to strengthen international awareness for future responses would be appropriate.

President Wickremesinghe thus proposed that before COP 28 in Dubai, like-minded nations should meet at Ministerial Level to discuss the way forward on all aspects of climate finance.

He also noted that this should be followed with a meeting of the Heads of Government of these countries on the margins of COP 28 to display a collective frame of mind to stave off the calamity.

Following is the full speech delivered by President Ranil Wickremesinghe at the Cop 27 Climate Change Summit;

“The salubrious environs of the green city of Sharm El-Sheikh will undoubtedly inspire our discussions at COP 27 to a successful conclusion. I sincerely thank the Government of Egypt for your warm welcome and hospitality.

Sri Lanka is replete with biodiversity and has consistently addressed the challenges of climate change. Let me record the action of Sri Lanka in this regard:

• Spearheaded the UN declaration of the 1st March, as World Sea Grass Day

• Will not increase further energy capacity via coal power

• Will phase out fossil fuel subsidies

• Will join the recent Global Methane pledge made in Washington

Yet, for climate action to be successful, wide-ranging measures to complement the UNFCC and Paris Agreement must be pursued.

The lack of capacity is the biggest obstacle to the implementation of Climate Action plans. Therefore, capacity building is vital in this regard.

To overcome this obstacle, we propose to establish an International Climate Change University in Sri Lanka, with an ancillary institution in Maldives, which would be the first of its type.

This seat of learning can be a trans-disciplinary global centre for green and blue studies – for scientists, environmentalists, researchers, policymakers, development practitioners, and of course, students the world over, to interchange knowledge transcending national and disciplinary boundaries.

The envisaged Climate Change University will offer both short-term courses and postgraduate academic awards to build capabilities for mitigating and adapting to climate change.

The University will also expedite the skills of the new generations to deliver the political, economic, social, cultural and digital transformations required to prevent a 1.5-degree world.

It will be the vehicle to enlighten domestic climate change challenges and prospects.

The collaboration of multilateral institutions and organizations such as the Commonwealth, World Bank and the ADB amongst others, will be sought for the establishment of this institution of higher learning – making it a multi-stakeholder partnership transcending – national boundaries.

I hope Sri Lanka’s proposal will receive extensive support and endorsement from the international community.

Since the prescriptions for addressing climate change have to be dispensed in the global domain, we will meet again next year, charged with high hopes.

However, the chequered implementation of previous decisions, including those of COP 26 is extremely disheartening.

Regrettably, the ground reality is that the fossil fuel-based industrialized countries of G7 and G20 who have been the main promoters of green hydrogen are now backtracking to use of fossil fuel.

Such double standards are unacceptable. Developed nations should be given leadership to overcome climate challenges rather than abdicating their responsibilities.

It is no secret that climate financing has missed the target.

It is ironic that the 100 bn dollars pledged annually, have not been available in the coffers to finance climate challenges – as many developed nations deem it fit to renege on their climate financing contributions.

These countries who are also on both sides of the Ukraine war seem to have no qualms about spending for a war which will finally exceed $350bn. A conflict waged purportedly for the security interests of the combatants.

The only security at stake is food insecurity, acerbated to levels not experienced before the war. Many living both in the developed and developing world are outside the scope of three meals a day.

It is estimated that between 30 to 40 million people are being driven into hunger, especially in Africa. This war has also resulted in the upward spiralling cost of living, and shortages of oil and gas supplies, and it has brought the fight against hunger to our homes.

Expectedly, it has led to the curtailing of much-required climate finance pledged by these very same countries.

The issue we have is not finding the party responsible for the war, but the party that will end the war.

Why do we need this funding? It is a known fact that the practice of colonialism transferred the rich resources of Asia and Africa to Europe and was used to industrialize their countries. We became poor from this plunder.

The unbridled industrialization of the developed economy is also the root cause of climate change, the consequences of which, we the poor countries are forced to suffer. Our problems are augmented due to the absence of adequate funding. Therefore, those in the South are facing double jeopardy – struggling to develop economically while fighting to protect the living standards of our populations.

It is therefore imperative that the developed countries deliver on their pledge in Glasgow – by doubling their funding. Adding insult to injury, damages caused by extreme weather conditions are increasing, and their impacts are exceedingly costly.

Developing countries which are the worst affected by the rise in emissions from the industrialized world, need to be compensated for loss and damage.

While the issue of loss and damage is now included in our formal agenda, we have to ensure that the emitters contribute financially to those affected. As proposed by the Climate Vulnerable Forum, commissioning a Special Report on this aspect to strengthen international awareness for future responses would be appropriate.

Considering the failure of the developed world in bringing about the much-discussed relief, it is proposed that before we get to Dubai for COP 28, like-minded nations should meet at Ministerial Level to discuss the way forward on all aspects of climate finance.

This should be followed with a meeting of the Heads of Government of these countries on the margins of COP 28 to display a collective frame of mind to stave off the calamity.

In conclusion, let me recall the UN Secretary-General’s recent words, “The choice is between collective action or collective suicide”.

The vacuum created due to inaction now requires the global display of sustained political will through dynamic action and constructive cooperation on the part of like-minded countries to prevent this catastrophe.

Let us traverse this path urgently.”