Colombo, Sri Lanka – The man who paved the way for the Rajapaksa dynasty’s dominance over Sri Lankan politics for over two decades has no immediate plans to flee the country, like two of his brothers did, according to a top aide.

Former President and Prime Minister Mahinda Rajapaksa, 76, heads the Rajapaksa clan that most Sri Lankans blame for the country’s worst economic crisis in decades that has triggered the ongoing unrest in the island nation.

He reportedly flew to Singapore in a Saudi plane on Thursday as the nation awaits his resignation.

Another brother and former finance minister, Basil Rajapaksa, also left the country this week as the political unrest intensified.

A top aide of Mahinda Rajapaksa said the former strongman and patriarch of the Rajapaksa dynasty has no such plans. Mahinda’s eldest son, former minister Namal, has also publicly stated that he would not leave the country.

“They both have clearly said they would not leave Sri Lanka,” the aide who wished to remain anonymous told Al Jazeera on Thursday.

Mahinda’s aide also indicated that there was a rift between him and Gotabaya, the military officer-turned-president who fled.

“It was because of him [Mahinda] that Gotabaya came to power, but once elected, the prime minister was sidelined by his own brother,” the aide told Al Jazeera.

“Until the last moment, Gotabaya Rajapaksa didn’t know how to govern but he never listened to Mahinda’s advice.”

Speaking on a social media platform in May, Gotabaya’s cousin Udayanga Weeratunga also said the president never consulted with the prime minister while making decisions.

Weeratunga described Gotabaya as a man “with a military mindset who only understands military way of dealing with things”.

Sri Lankan media have reported that Mahinda was reluctant to nominate Gotabaya as the presidential candidate in the 2019 elections.

A Bloomberg report this week said Namal is being groomed by Mahinda to be a future leader and carry forward the family’s legacy in politics.

But Sri Lanka’s protesters denounced the comments made by Mahinda Rajapaksa’s aide, describing it as another attempt by the Rajapaksa “cartel” to come back to power.

Vimukthi Dushantha, a member of the Black Cap Movement led by young protesters, said “blaming somebody else” has been a strategy of the Rajapaksa family during a setback.

“Rajapaksas are a family that drank blood from the Sri Lankan society like leeches for years,” he told Al Jazeera. “They always blamed somebody else when they were in trouble.”

Dushantha rejected claims made by Mahinda’s aide that the former leader did not agree with the policies pursued by his younger brother, President Gotabaya Rajapaksa.

Activist Shehan Malaka Gamage said while the Rajapaksa brothers may have political differences, they “would not harm each other under any circumstances”.

“When it comes to family bonds, they are united like nobody else,” he told Al Jazeera. 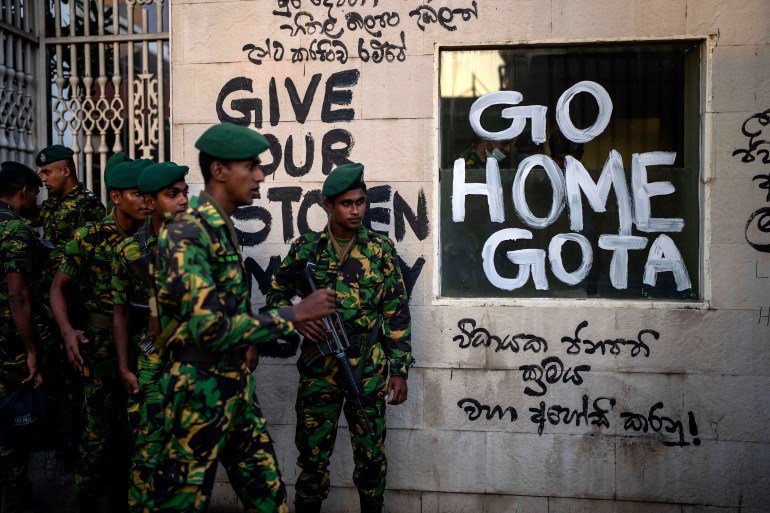 Sri Lankan soldiers patrol near the official residence of President Gotabaya Rajapaksa after it was stormed by anti-government protesters in Colombo [File: Rafiq Maqbool/AP]

Mahinda’s presidency paved the way for several of his brothers, including Gotabaya and Basil, to hold prominent positions in the Sri Lanka administration.

During his presidency, Mahinda, along with then-Defence Secretary Gotabaya, brutally crushed a decades-long rebellion by the ethnic Tamils in the north, a civil war that claimed tens of thousands of lives, including 40,000 civilians.

In the last stages of the civil war that ended in 2009, Mahinda’s government was accused of wartime atrocities, extrajudicial killings and other systematic abuses.

Many in the Buddhist-majority nation of 22 million people hailed Mahinda for his brutal crushing of the civil war, calling him a hero.

At the height of their popularity, the Rajapaksas were revered as a “royal family”, with many people, including senior politicians and officials, literally bowing down before them. 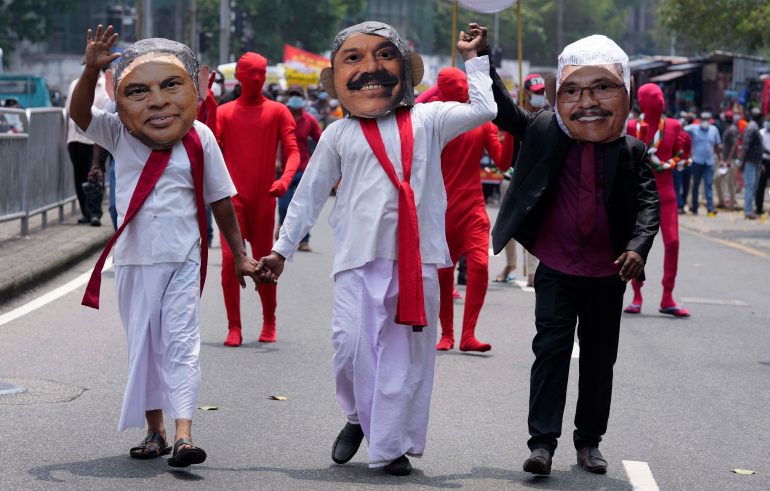 After winning the general election with a sweeping majority in 2019, Gotabaya appointed Mahinda as the prime minister in a new Rajapaksa administration.

But in a reversal of fortunes for the island’s most powerful clan, Mahinda was forced to resign as prime minister earlier this year following a deadly protest over an escalating economic crisis.