Home » Fearing there 'is no future', Sri Lankans are queuing for days to flee their homeland

Fearing there 'is no future', Sri Lankans are queuing for days to flee their homeland

written by Top Stories Wed Jul 20, 3:09 am Source
Thousands of Sri Lankans are queuing — some for days in the hot sun — for a passport and a ticket to escape the island nation’s economic crisis.Qatar, Singapore and Kuwait are among the prospective destinations for those in the queues which stretch for a kilometre in all directions around the Department of Immigration and Emigration in Battaramulla, Colombo.The country is in the midst of , anti-government protests targeted while economic troubles have meant 5.7 million need urgent humanitarian assistance.

'I need to go abroad'

Chathoranga Munasingha, 37, is trying to get his passport so he can take his wife and children to Qatar and work as a technician. “I’m standing here because I need to go abroad to find a new job, I need a passport,” he tells SBS News.

“It’s really bad. You can see there are people standing here in the sun. I came here last night, I’m still here but I probably won’t be done today. You can see how many people are here”. Some 3,500 passports are being issued every day, up 40 per cent on normal levels. Source: SBS News

At least 16 people have died already in Sri Lanka waiting in fuel queues since the country’s economic crisis began.The lines for a passport to leave the country are nearly as long, the sun above is dangerously hot.

But there is no shortage of people prepared to brave the conditions, those that didn’t bring umbrellas are holding their documents over their heads for much-needed shade.

Look around, everyone is trying to leave

Indu SenarathHG Amila Kumarihami, 38, wants to go to Kuwait to work as a housemaid.“(It’s a) money problem. I have three children and I can’t find a job,” she says.Sports therapist Indu Senarath, 40, is in a similar situation, trying to leave for Singapore to support his family.“It’s a disaster in Sri Lanka. Those that rule the country have ruined it. Look around, everyone is trying to leave,” he said.

“I came yesterday morning but still good to take my passport. There are old people here, pregnant women. There is no future here.” 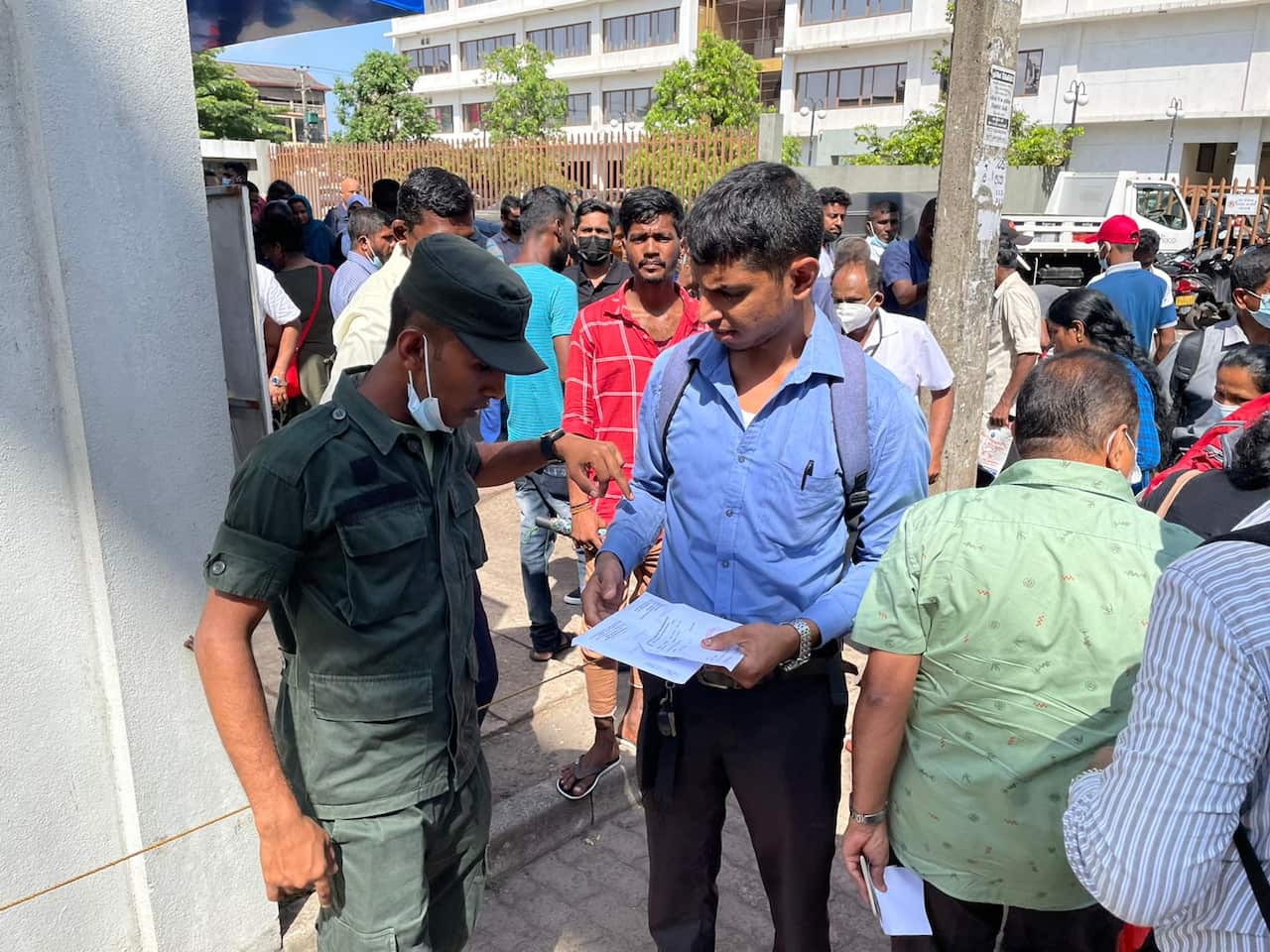 Inflation and shortages of food, fuel and medicines led to thousands taking to the streets in anti-government protests. Source: SBS News

Hit hard by the COVID-19 pandemic and tax cuts introduced by the government of ousted president Rajapaksa, Sri Lanka, known for its tea exports, is in the midst of its worst economic crisis since it won independence from the UK in 1948.The country of 22 million people has nearly run out of dollars for imports and has defaulted on foreign loans.Inflation of over 50 per cent and shortages of food, fuel and medicines have brought thousands onto the streets in months of protests that culminated in Mr Rajapaksa's ousting and forced the country to seek help from overseas.

Local media have reported that Sri Lanka’s Immigration and Emigration Department has seen a significant increase in new passports issued, with 31,725 passports issued in the first 10 days of June alone, a threefold increase.

Media spokesperson for the Department of Immigration and Emigration Piyumi Bandara told EconomyNext that, in the 10 days that preceded June 1, only 10,000 new passports had been issued.“Passports are being issued rapidly. Normally under one-day service we only issue 2,500 passports, but now we have increased that to 3,500 new issues.”This week, Sri Lanka's acting president, Ranil Wickremesinghe, blamed his predecessor, the ousted president Gotabaya Rajapaksa, for hiding the reality of Sri Lanka's economic situation from the people.

But Sri Lanka’s people know all too well the dire circumstances the country is facing. 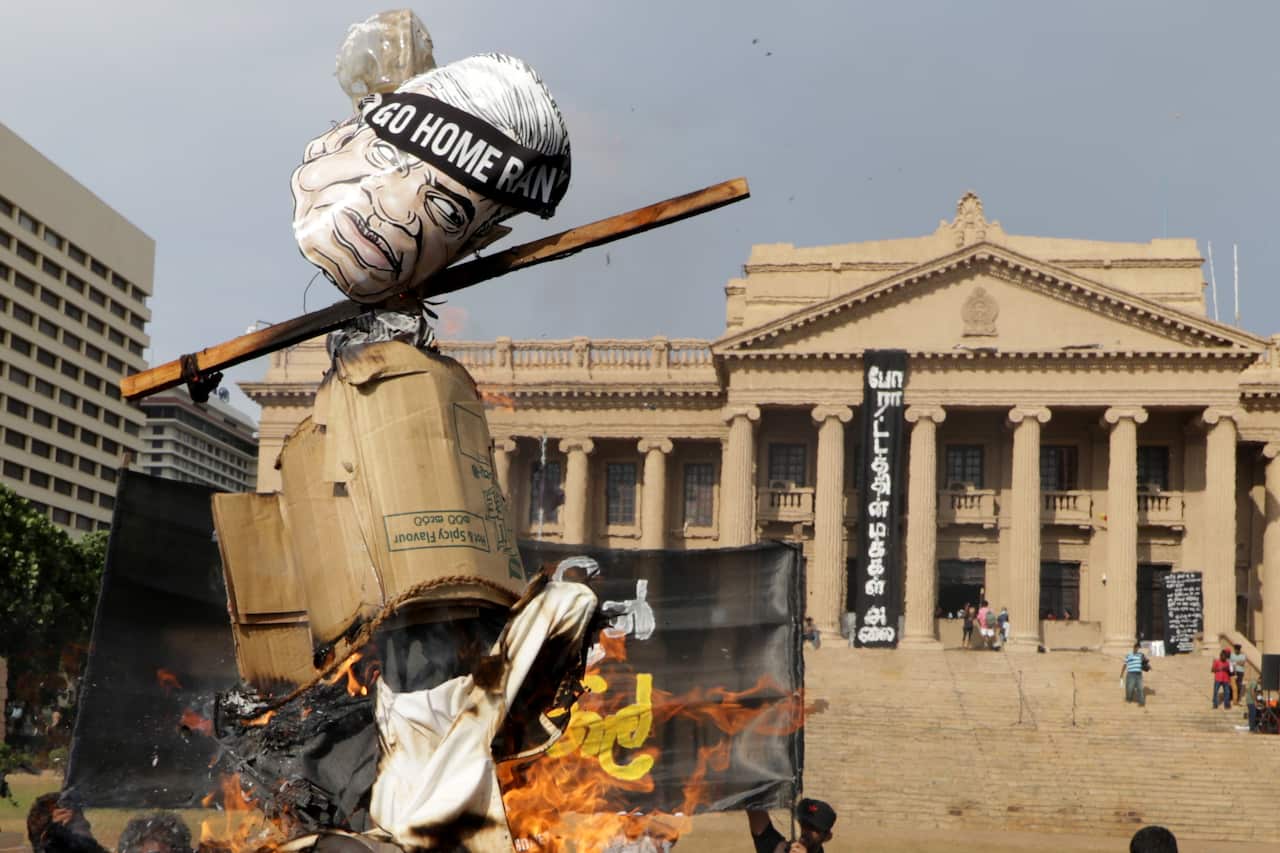 'The government, political leaders have made problems for all of us'

Lines for petrol can be seen all across Colombo, on both sides of the road, stretching for kilometres.The mood at both the fuel queues and the passport office is tense, with armed military and police on hand to maintain order.Pethum Chamara, 32, hopes to reunite with his brothers, who each now live in Japan and South Korea.“I’ve (been) standing here two days. I want to try and go to another country, I have qualifications,” he said.

“The government, political leaders have made problems for all of us”.