Late last month, the Northern Fishermen’s Action Committee (NPFAC) in Sri Lanka, with the support of the Socialist Equality Party (SEP), held a successful meeting in Kayts on the Jaffna Peninsula. Over 20 fishermen, including women, as well as SEP members, participated in the event which resolved to establish a local action committee. 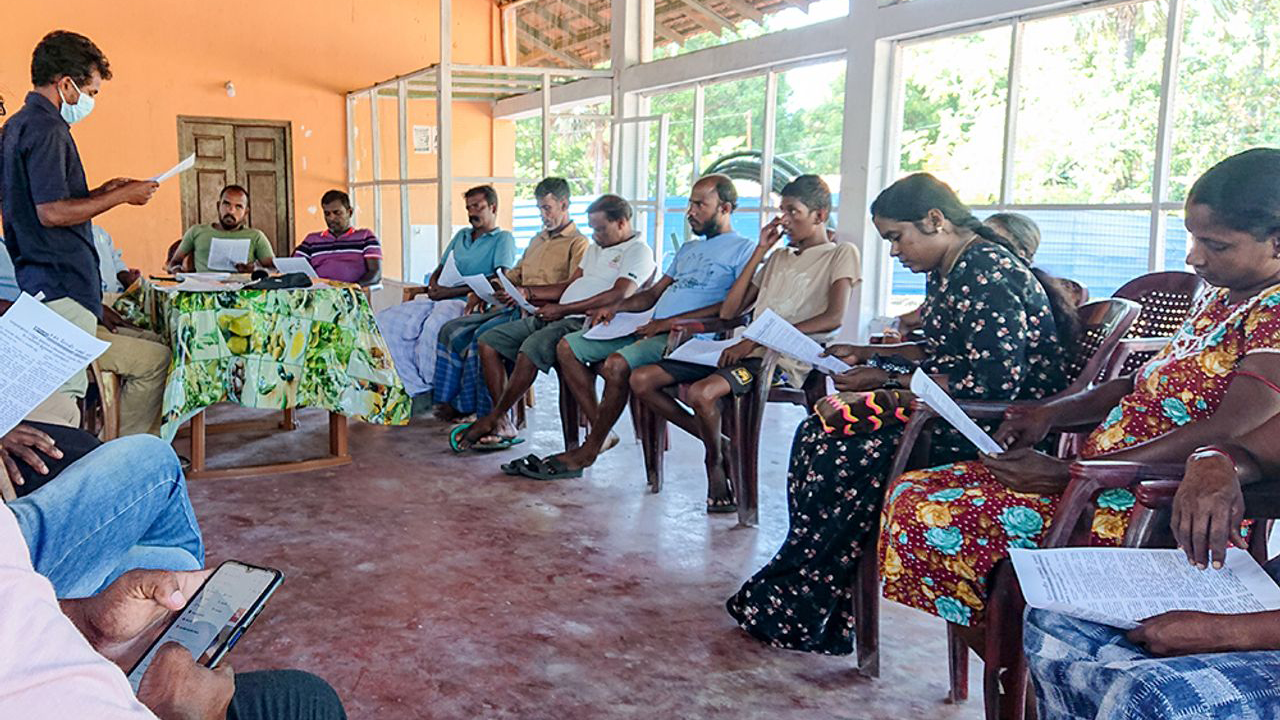 The NPFAC, which was established by representatives from different parts of northern Sri Lanka earlier this year, is fighting to form action committees of fishermen and other workers throughout the province. NPFAC and SEP members campaigned for several days to build the Kayts meeting.

Kayts is an island located 16 kilometres from Jaffna city, connected to it by a five-kilometre causeway. Like other areas throughout Sri Lanka’s north and east, Kayts was devastated by Colombo’s 26-year communal war, which ended with the bloody defeat of the separatist Liberation Tigers of Tamil Eelam (LTTE) in May 2009. According to UN estimates, at least 40,000 civilians in the north and east were killed by the Sri Lankan military during the final stages of the conflict.

Thousands of families live in fishing villages like Paruththiyadaippu, Melinchimunai and Thampaaddy across the region. During the civil war residents faced brutal repression by the Sri Lankan navy, aided and abetted by the Eelam People’s Democratic Party (EPDP). This party, which functioned as a paramilitary formation, was led by Sri Lanka’s current Minister of Fisheries, Douglas Devananda. The Sri Lankan navy still monitors fishermen and other residents in Kayts.

Many people from Kayts were “disappeared” and killed during the war. This included SEP member Nadarajah Wimaleswaran and his friend Sivanathan Mathivathanan from Velanai in Kayts. Both were fishermen. They disappeared while returning home from Punguduthive on March 22, 2006. SEP investigations pointed to the navy’s involvement in their disappearance.

NPFAC president and SEP member Rasenthiram Sutharsan chaired last month’s meeting. “As fishermen, we have been affected by the economic crisis like other working people in the country,” he told the meeting.

“Some people face starvation; fishermen can’t go fishing because of the fuel crisis; and northern fishermen have stopped deep-sea fishing,” he continued, pointing out that fishermen cannot work because the government is not providing adequate amounts of kerosene and other necessary fuel supplies.

“This problem has been created by the capitalist profit system. We must abolish this system and bring a workers’ and peasants’ government to power. The building of independent action committees throughout the country is essential to carry out this fight,” he said. 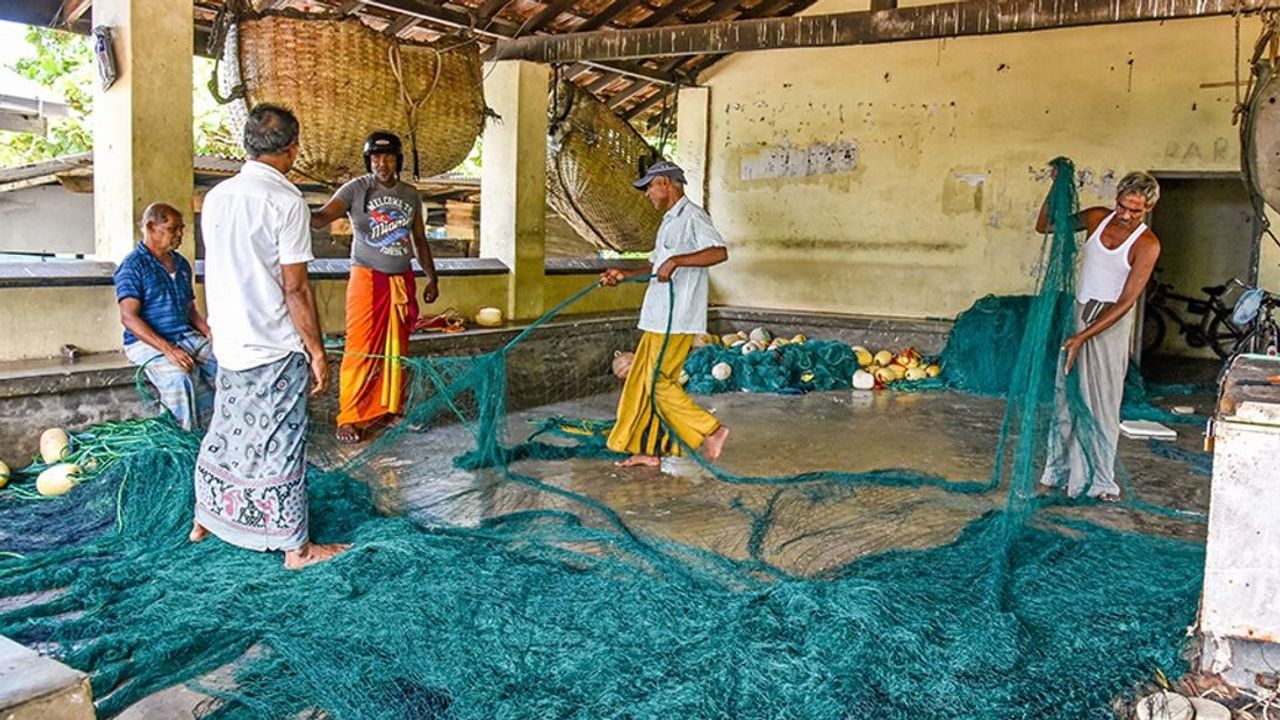 NPFAC secretary Rajaratnam Thirugnanavel said, “Fishermen’s children are facing malnutrition because we cannot afford to buy the nutritious food they need. We can’t buy biscuits, fruit and milk powder because of the high prices.

“It’s now 13 years since the end of the war but the navy’s suppressive communalist actions continue against fishermen in the north. All the Tamil parties and fishermen societies are silent about these attacks. We need to unite with the workers and all other fishermen throughout the country,” he said.

Following these speeches, the meeting discussed an NFAC statement entitled, “Build fishermen action committees to defend livelihood and democratic rights.” The statement explained the social consequences of President Ranil Wickremesinghe’s decision to implement the austerity demands of the International Monetary Fund and his government’s use of the Prevention of Terrorism Act and other repressive laws to crush mass opposition.

The statement included a series of demands related to fishermen, including abolition of all their debts, ending the oppressive military pass system for fishing and a guaranteed price for fish. It also called for the nationalisation of multinational fishing industry companies, placing them under workers’ control. This demand, the statement explained, was part of the broader struggle for all the major industries, banks and plantations to be nationalised under workers’ control.

A. Shantharaj, a young fisherman, supported the statement, saying: “It explains our problems correctly. It doesn’t contain false promises.”

A. Rajan said that fishermen did not know why the government had banned certain methods of fishing. “Our fishermen bought material available in the shops and they prepare their own fishing nets. Sometimes the navy arrests fishermen while they’re fishing, assault them and then file cases against them claiming they were using banned nets,” he said.

“We cannot manage with the current high price of kerosene oil which is selling at 340 rupees [a litre]. We can’t continue to keep fishing this way,” he added.

Another fisherman said: “This statement has also changed our attitude towards the Indian fishermen. You have explained that the Indian fishermen are our brothers and that we are all affected by the profit motives of corporate fishing methods. The navy, however, is only arresting the innocent poor fishing workers from Tamil Nadu.”

SEP Political Committee member P. Thirugnanasampanthar said that Sri Lanka’s economic turmoil is part of the global economic crisis, which has been exacerbated by the COVID–19 pandemic and the US-NATO war against Russia.

“We have to fight against the imposition of the burden of the economic crisis on working people. To do that we need to educate workers and others coming into struggle and also explain the looming threat of a world war. That is why we call upon workers and the poor to form action committees in all workplaces and villages, independent from the trade unions and capitalist parties,” he said.

Thirugnanasampanthar said the SEP’s call for a Democratic and Socialist Congress of Workers and Rural Masses would be based on delegates from action committees across the country to fight for their social and democratic rights.  “We can only solve problems of the workers and poor on the basis of the international socialist program,” he said.

Following this discussion, the meeting decided to establish a Kayts Fishermen Action Committee. Nagarajah Kodeeswaran was elected its leader and six fishermen, including one woman, selected as its management committee. The committee resolved to unite with other workers and fishermen across the country and internationally and said they appreciated the SEP’s support.

During the campaign for the meeting, several fishing village residents spoke to the WSWS about the social crisis they confront.

Sixty-year-old Uthayasekaran Vijeyakumari from Paruththiyadaippu has two children. She and her husband, who is unwell and cannot work, are only able to survive because one of their sons, who works as a fisherman in Moonampitti, Mannar district, sends them a small amount of money.

“My husband has been a patient for six years and is unemployed. My son does his own fishing, but his equipment is worn out and he needs new equipment. He has no money for that, which is why he does share fishing with another person. He also has children and it is difficult to feed them with the meagre income he earns,” she explained.

Vijeyakumari, who had just bought a kilo of rice that day and was planning to use it over the next two days, said they were suffering because of lack of adequate food. “Although we are fishing families, we cannot afford to have fish curries and in our old age we suffer from ailments. No one is here to help people like us. Neither the Tamil parties nor the government have come forward to help us in any way,” she said.

Koneswaran, another woman, said: “My husband is also a fisherman and needs 50 litres of kerosene a day in order to go fishing. They [the government] will only allow us to 7 or 8 litres, which is not enough. We cannot go anywhere else to buy the other litres of kerosene we need, and we cannot afford it because the price is so high. To buy 50 litres we have to spend 17,000 rupees.

“My husband has stopped fishing because he cannot earn an adequate income from it and so he is currently doing odd jobs. So, without sufficient income the five of us in our family are suffering. We’ve stopped using milk powder for our children and we live in fear of what will happen to us without food in the coming days,” Koneswaran said.

S. Paraloganathan continues to fish even though he is not in good health: “We are suffering more from the economic crisis now than during the war years, he said, pointing out that Colombo governments frequently imposed blockades on essential items during the conflict.

“We need an organisation to fight for our rights. This situation cannot be allowed to continue. The Tamil capitalist parties are no use. They are working for their own benefits,” he said.