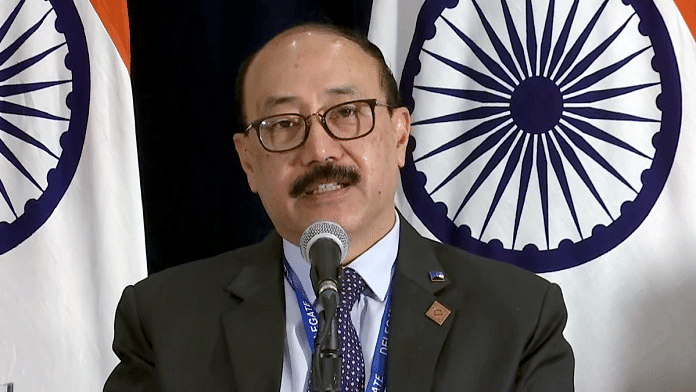 New Delhi: Foreign Secretary Harsh Shringla’s ongoing visit to Sri Lanka assumes critical significance in the development of bilateral ties between New Delhi and Colombo with both governments eager to reset strained ties over the delay in infrastructure projects compared with those the island nation has with China.

The Narendra Modi government is miffed with the Rajapaksa regime over slowing down of Indian projects while those by China are rapidly progressing. During the four-day visit, which began on 2 October, Shringla will be taking stock of every infrastructure project that India is running across the island nation and assess the reasons for their delay, according to sources.

Sources said, while India understands the Rajapaksa administration’s “predictable” tilt towards China, it wants Sri Lanka not to “favour China at the cost of their relationship with India.”

When the Rajapaksa brothers — President Gotabaya Rajapaksa and Prime Minister Mahinda Rajapaksa — came to power in Sri Lanka in 2019 after the Easter Bombings, it seemed there would be a resetting of ties between India and Sri Lanka in the face of rising Chinese debt, which got aggravated post the Hambantota Port takeover by Beijing.

Sources said “China’s growing presence in Sri Lanka” is a big “question and concern” for India. Under the Rajapaksa regime Indian projects have slowed down due to the lack of support from the government there while that of China’s have been pushed ahead.

New Delhi believes it will be beneficial for Sri Lanka’s own growth if it “engages with both India and China on equal terms” and “not at cost of one another” as the Sri Lankan government continues to “sway to Beijing’s tunes”, sources said.

Among the many infrastructure projects, India wants Sri Lanka wants to move the oil tank farm project in Trincomalee, in an effort to bolster energy ties between both countries.

On Sunday Shringla visited the lower tank farms to push forward the project.

The Adani Group will have 51 per cent stake and the agreement to build, operate and transfer (BOT) will be valid for 35 years.

The Colombo West International Container Terminal (CWICT) of the Port of Colombo will be coming up just next to China’s jetty at the port.

However, in order to get this deal done, Sri Lanka scrapped the $500 million tripartite project to develop the Easter Container Terminal (ECT) which Colombo had signed with India and Japan under the government-to-government deal.

During the Foreign Secretary’s visit India will once again push for the deal, sources said, even as New Delhi believes scrapping the project, in fact, “hurts credibility” of the Sri Lankan government and will continue to push for it.

With the entry of Adani in Sri Lanka, India will have “some presence” at the Colombo port instead of no presence at such a strategic location, sources added.

Apart from asserting the importance India gives to its neighbourhood policy with respect to Sri Lanka, the Foreign Secretary will also discuss with the Sri Lankan government, the issue of expanding the Colombo Security Conclave (CSC).

This will be a follow-up to what was discussed at the last meeting of the CSC which took place virtually between the Deputy National Security Advisors (DNSAs) of India, Sri Lanka and Maldives, sources said. At this meeting, it was decided that the CSC, which was earlier known as the trilateral NSA meeting on maritime security, will induct Bangladesh, Seychelles and Mauritius as full-fledged members from being observers currently.

The CSC is expected to meet later this year again in Maldives, sources added.

The CSC was revived by NSA Ajit Doval in November 2020, which met for the first time since 2014. Owing to China’s growing influence in the Indian Ocean region, India is now planning to include more members in this dialogue to address the rising competition and also to firm up a robust intelligence and security network against the growing challenges of arms and drugs trafficking in this region.

The Tamil card and 13th amendment

Shringla, who will be in Sri Lanka till October 5, also visited Jaffna and Kandy on Sunday in a strong signal towards the Modi government’s plan to reignite the Tamil reconciliation issue.

While in Jaffna he visited the iconic Jaffna Cultural Centre built with Indian grant assistance. “This centre will help the people of Northern Province reconnect with their roots and in nurturing our shared cultural heritage,” said a tweet by the Indian High Commission in Sri Lanka.

Earlier this year, as Sri Lanka faced a critical situation at the UN Human Rights Council  in Geneva, India asserted that it remains committed to the aspirations of the Tamils of Sri Lanka for “equality, justice, peace and dignity”.

India abstained from voting on a resolution in the UNHRC — the eighth resolution on Sri Lanka at the Human Rights Council since the end of the war in 2009 — that flagged human rights concerns in Sri Lanka and for the alleged war crimes committed in the decades-long civil war between its security forces and the separatist Liberation Tigers of Tamil Eelam (LTTE).

However, New Delhi did support Colombo in rejecting the March 2021 resolution that was aimed at imposing punitive measures on Sri Lanka for the alleged war crimes committed in the decades-long civil war between Sri Lankan security forces and the LTTE.

India and Japan were among 14 countries which abstained from voting on the resolution — 11 countries, including Pakistan, China and Russia, voted against it.

Shringla’s visit will also see India once again pushing for full implementation of the 13th amendment to the Constitution of Sri Lanka.

The 13th amendment became part of the Sri Lankan constitution as a direct result of the Indian intervention in 1987, under the countries’ accord. It proposed the establishment of a provincial council system and devolution of power for nine provinces in Sri Lanka. However, successive governments in Sri Lanka have not implemented it.

India has been urging Sri Lanka to implement and enforce the amendment ever since the country’s war with Tamil separatists ended in 2009.

Also read: Want India trade pact to be at par with those with Quad partners: Australian Trade Minister

Why news media is in crisis & How you can fix it

But the news media is in a crisis of its own. There have been brutal layoffs and pay-cuts. The best of journalism is shrinking, yielding to crude prime-time spectacle.

ThePrint has the finest young reporters, columnists and editors working for it. Sustaining journalism of this quality needs smart and thinking people like you to pay for it. Whether you live in India or overseas, you can do it here.