written by Top Stories Fri Jun 10, 10:12 pm Source
Australia's most high-profile asylum seeker family has finally been brought home to the central Queensland town of Biloela . The campaign, called Home To Bilo (a nickname used among locals to describe their tiny rural spot), was spearheaded by a coalition of women in Queensland who believed in the Nadesalingam family's right to return home. Nades and Priya are Tamil asylum seekers who fled persecution from Sri Lanka in 2012 and 2013, arriving by boat in Australia. Since then, they faced a four-year legal battle to seek asylum, with their two Australian-born daughters Kopika, 7, and Tharnicaa, 4.

On Friday, they made it home to Biloela.

But with more than 500,000 signatures garnered in support of the campaign, and , Home to Bilo campaigners say it took a village to make the moment happen.

Here are some of the many unsung heroes behind the scenes of the Home To Bilo campaign, showing their solidarity with the Nadesalingam family in their own unique way.

Most people know Home to Bilo campaign spokesperson Angela Fredericks, who is one of the figures leading the charge to help bring her friends home to Biloela.

But not many know her mother, Anne Smith, who moved to Biloela in late 2018 to support Angela's four-year-long and all-consuming advocacy for the Nadesalingam family. Ahead of the family's return, Anne had a busy day picking up a few noted essentials for their new home, generously provided to them rent-free for a year."[The home is] looking great because I just wanted it to be so welcoming so that when they walk in, they say: 'thank goodness, I'm home,'" Anne said. Anne met the Nadesalingams in person for the first time on Friday when their plane touched down in Biloela, but to young Kopika and Tharnicaa, she is known as Grandma Anne.

"I'm just so glad to see them back here, and for Angela to get her life back. She's really put their life on hold for four years, waiting for this family," Anne said.

When Brett McAnilly found out Angela was browsing for mattresses to furnish the Nadesalingam home, he agreed with his wife that he'll provide anything they need for free.

He has owned the local Beds R Us store in Biloela for the past seven years but said he has never seen the community rally together for a cause like this before. 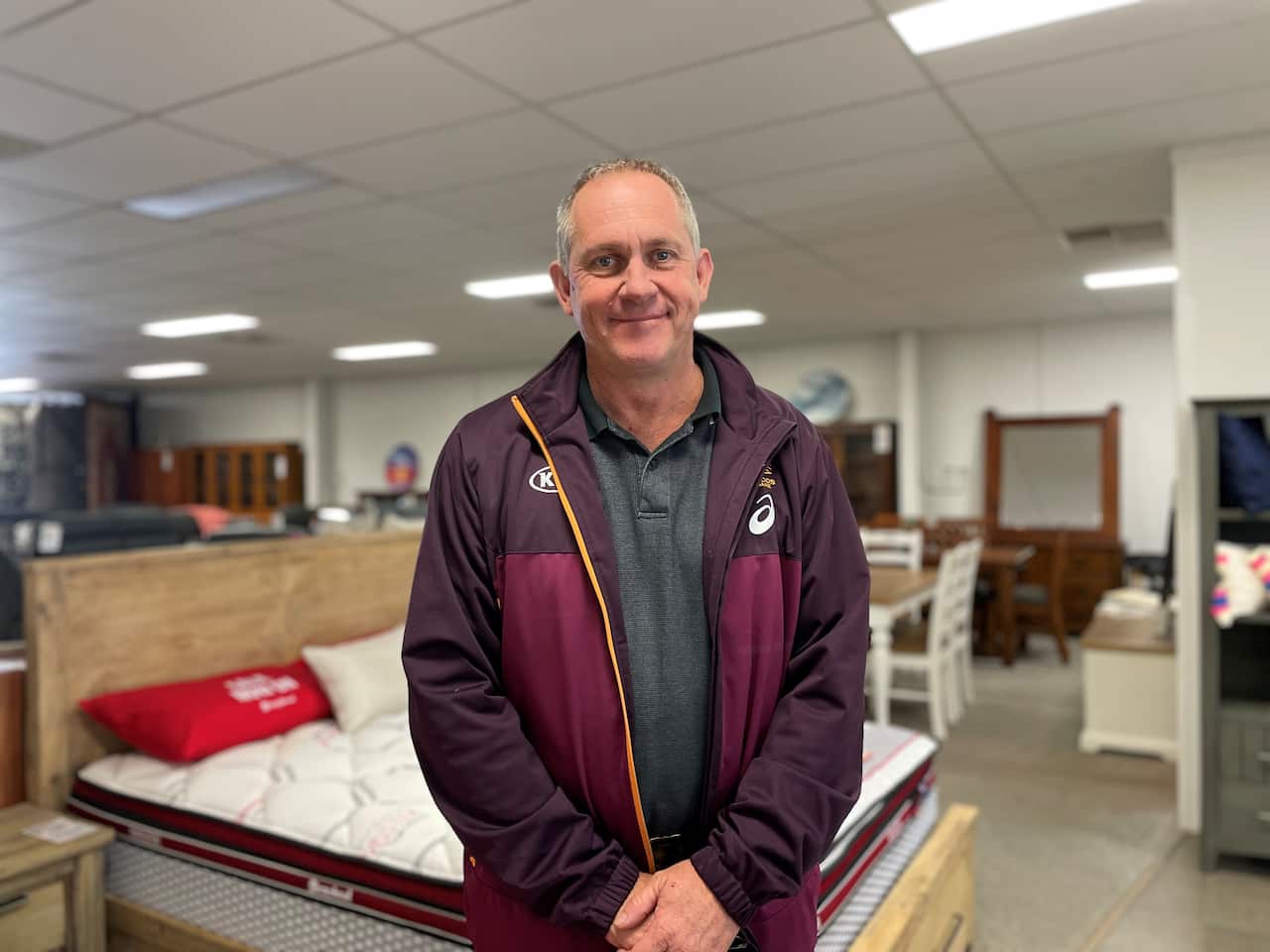 Brett McInally said providing mattresses and manchester to the newly arrived Nadesalingam family was the least he could do to provide them some comfort after their last few years of "hell". Source: SBS News

"This is some way we can help somebody out who has been in a bad situation and make them feel a bit better, make their life more comfortable because obviously the last two or three years have been hell for them," Brett said.

He donated a twin mattress and two single mattresses valued at $2,000. Manchester and pillows were also provided free of charge. The Nadeslingam family were given an emotional welcome as they arrived back to the Queensland town of Biloela. Source: SBS News

Brett reflected on the scores of refugees fleeing Ukraine following the war in eastern Europe and said he feels "pretty helpless to actually change or do anything". "We got it pretty easy. We look at how we live and we don't have to worry about being persecuted," he said.

"You've got to have some sort of humanitarian look at it."

Before the media frenzy born out of the Home To Bilo campaign, Aran Mylvaganam was the first person to speak up about the plight of the Nadesalingam family. A few days after the family was detained by the former government in March 2018, the Tamil Refugee Council sent a representative to interview Priya.

The next day, Aran distributed the first press release that highlighted the family's plight, capturing the attention of several media outlets. Tamil Refugee Council representative Aran Mylvaganam is one of the first few people who took the Nadesalingam matter to the press. Source: AAP / Daniel Pockett

Since the campaign officially launched, Aran and his team allowed the Home To Bilo coalition to take full rein, providing support when needed.This ranged from providing interpretive services, assisting the family's legal team with additional resources, lobbying the government and campaigning at rallies.

Aran believes getting the family back to Biloela wasn't a chance occurrence or a miracle event, but rather due to the "brave resilience" of mother Priya.

"The moment I spoke to her, the first time, I saw the fighting spirit is the reason why this campaign has been such a success."While Aran sees Friday's return as a success, he believes more work needs to be done to ensure more Tamil asylum seekers who arrived in Australia by boat between 2012 and 2013 can be settled permanently.

"People have been part of our community for 10 years. Our demand of the government is to grant permanent residency, regardless of whether they are found to be genuine refugees or not."

The face behind the social media

Activist and artist Jayne Centurion has been an active part of the Home To Bilo campaign behind the scenes, manning the social media profiles.

She's the brainchild of the Home To Bilo Instagram page, and is responsible for handling press enquiries and fact-checking claims made about the Nadesalingams."We want to make sure that for this campaign, that we are combating that by only providing factual information," Jayne said.

Jayne first met the family through their mutual volunteering efforts at the local Vinnies. She used to live near the Nadesalingams before they were whisked away by Australia Border Force in 2018. 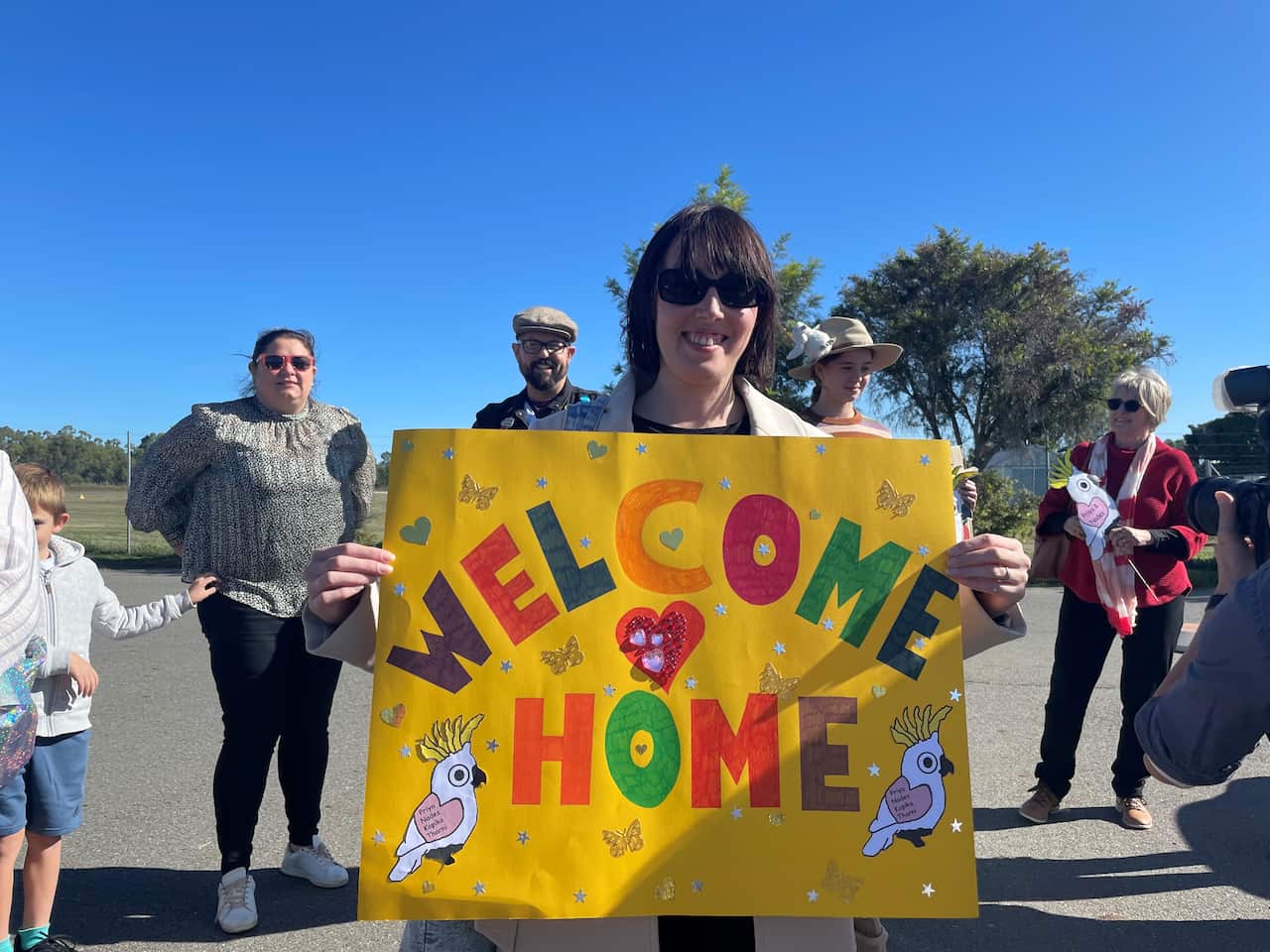 She said she was horrified when she heard the news and immediately raised her hand to work on the campaign as soon as possible. "To think that you could have Border Force roll into your tiny town in the middle of Central Queensland in the wee hours of the morning and physically manhandle people out of their home ... I don't even know how you put it into words," Jayne said. She said while the Facebook and Twitter profiles for the Home To Bilo campaign solely focus on the Nadesalingams, she uses the Instagram platform to raise awareness about broader refugee and asylum seeker issues in Australia. "What I've been doing on Instagram is showing people that this is not something that is an isolated incident. This is something that actually has been happening in Australia for a long time," she said.

"We don't just want this to be tokenistic."