Magazine’s milk metaphors to ruminate on countries. The Russian bear, the Chinese dragon, the American eagle, the French rooster are among the animals that inhabit the international relations menagerie in magazines and journals.

When it comes to India, elephant is the preferred animal, although the Economist frequently invokes the tiger. While both the tiger and lion are native to India (KKR in IPL should really have been called Bengal Tigers, going up against Gujarat Lions), they’ve been usurped by Bangladesh and Sri Lanka. You won’t find a lion in Sri Lanka outside of the zoo and in the names of its people. The Sri Lankan lion ((Panthera leo sinhaleyus) has been extinct for 37,000 years. The LTTE ran with Tigers although there are no tigers in Sri Lanka either. Sinhalese Lions v Tamil Tigers is a whole other story I’ll delve into another time. 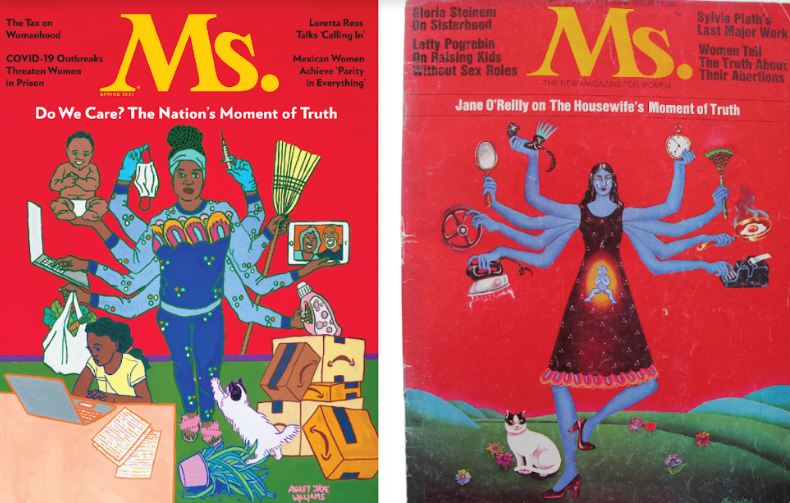 To come back to. India: Inasmuch as it is a toss-up between a tiger and elephant when it comes to animal spirits, the country offers many other metaphors. There’s always the snake-charmer, which Time magazine used in the 50s (once depicting then Defense Minister Krishna Menon with a cobra); there’s also the rope trick. There’s always poverty, depiction of which by the west offends Indians, who prefer to live in denial. There’s also the lotus, which is in vogue lately, mainly to depict the ruling party. For some reason, the cow is sitting it out. Too holy, I guess, although there is a Time cover from the 1940s showing a cow alongside Sardar Patel. A frequent go-to for magazines is Maa Kali. Time magazine pulled this in right from the get-go after India won its independence, depicting a self-injuring Goddess Kali to illustrate India’s Partition in an October 1947 cover. A more recent Time cover in 2012 celebrated Kali as “Goddess of the Year.” (see previous posts)

Ms magazine took Kali to a whole new level, twice putting manifestations of her on cover in what Little Richard fans can paraphrase as Good Golly Ms Kali. In the 1972 cover, Miriam Wosk created the iconic first cover depicting a modern version Kali, with tears streaming down her face while she uses eight arms to juggle an overabundance of work and household tasks. Illustrating Jane O’Reilly’s story “The Housewife’s Moment of Truth,” also showed a baby inside Kali’s belly. Eight arms strikes me as an odd (sic) number; I thought Kali was either four or ten.

Outrage brigade can sit down. Miriam Wosk died in 2010.

More recently, at the height of the Covid pandemic in April 2021, Ms. paid homage to Wosk’s work, depicting a COVID-era mother—this time juggling two kids, both quarantined at home; a mask and a vaccine; a broom, representing the lion’s share of home labor women have had to do since the beginning of the pandemic. No, she isn’t smoking in either of them. Too much work.

Views expressed above are the author's own.