Colombo, Sri Lanka – Anti-government protesters have returned to the streets of Sri Lanka’s capital and say they will continue their weeks-long uprising after parliament voted in acting leader Ranil Wickremesinghe as the country’s new president.

Hundreds of protesters gathered at the GotaGoGama site in Colombo on Wednesday, where only last week they had celebrated Gotabaya Rajapaksa’s resignation as president.

Addressing the crowds, protest leaders refused to accept six-time Prime Minister Wickremesinghe, 73, as the new head of state, holding him partly responsible for the country’s unprecedented economic and political crisis.

“As you know, the parliament elected a new president today, but that president is not new to us, it is not the people’s mandate,” Wasantha Mudalige, the leader of Inter University Student Federation, told the crowds.

“We managed to kick out Gotabaya Rajapaksa, who secured 6.9 million votes, but Ranil Wickremesinghe has now secured that seat from the back seat,” he added. “Ranil isn’t our president … the people’s mandate is on the streets.”

Protesters have also accused Wickremesinghe of making deals with the powerful Rajapaksa family to outmanoeuvre political rivals. Gotabaya Rajapaksa’s appointments of Wickremesinghe as prime minister in May and acting president after he fled in July further angered protesters, who want the country’s ruling elite to go.

At the protests on Wednesday, speaker after speaker – including Buddhist monks, Catholic clergy, students and artists – refused to endorse the parliament’s choice.

“Ranil Wickremesinghe should know that millions in the streets are much bigger than 134,” said artist Jagath Manuwarna, referring to 134 lawmakers who voted for Wickremesinghe.

While celebratory firecrackers were heard in some parts of the country last week when Sri Lankans heard Rajapaksa had resigned days after he had fled the country, no such celebrations greeted Wickremesinghe’s appointment, with just dozens of his supporters seen celebrating on the streets.

Many Sri Lankan protesters were also left unimpressed with Wickremesinghe’s main rival at the election today, Dullas Alahapperuma, as he has no experience of governance in a heavily indebted country desperate for an International Monetary Fund bailout.

Sri Lankans have been protesting for weeks amid an unprecedented economic meltdown that has brought the country to the brink of bankruptcy and increasingly unable to pay for food, fuel and medicine. 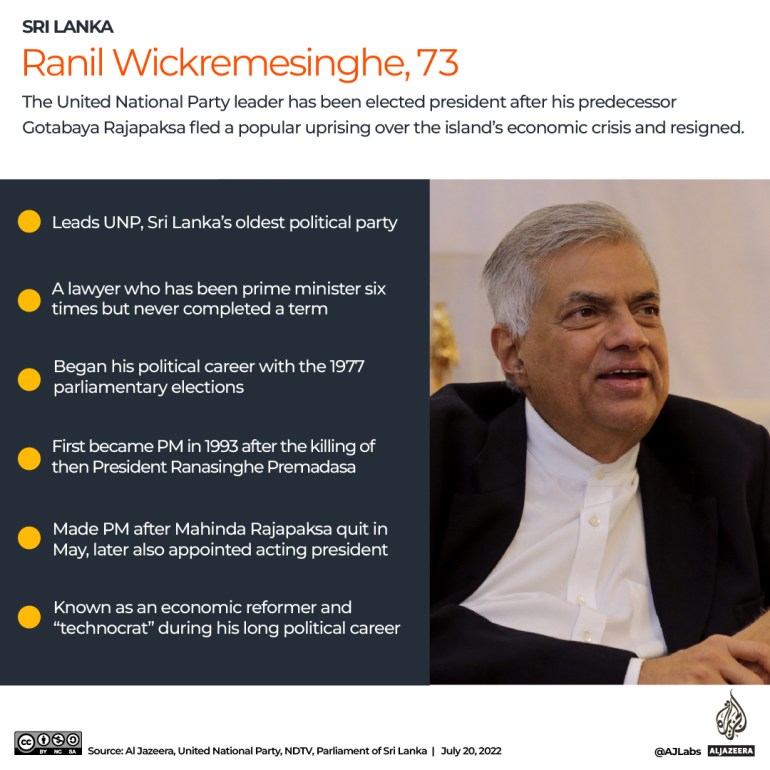 Feeling betrayed by parliament, the youth-led protest movement is currently regrouping and rethinking its strategy, according to Melani Gunathilake, a leading protester.

“We know very well that Ranil Wickremesinghe isn’t the same as Gotabaya Rajapaksa. He is a more cunning person,” she told Al Jazeera.

“Recently he has even been trying to suppress the protest by imposing a state of emergency and sending air force helicopters over GotaGoGama. But I don’t think people will be intimidated by these actions any more. Sri Lanka deserves a leader who actually cares for its people, not somebody who thinks about his political future.”

But one analyst, who did not want to be identified, told Al Jazeera “the protests may not be sustainable”, as many of the demonstrators in Colombo and other urban areas are middle-class and could be less likely to keep protesting if their material situation improves under Wickremesinghe.

Wickremesinghe is scheduled to take the oath as Sri Lanka’s president on Thursday morning, with his presidential term set to last until 2024.

As soon he becomes president, the post of prime minister becomes vacant and the cabinet of ministers is dissolved. Wickremesinghe will also resign as a member of parliament.

His immediate focus would be to find a suitable candidate for prime minister in the new administration.

On Wednesday, Wickremesinghe called on political opponents to put aside their divisions and work together to tackle months of severe food, fuel and medicine shortages

“Now that the election is over, we have to end this division,” he said.

Speaking to the media soon after Wickremesinghe’s election, Minister Harin Fernando hinted that the president will try to form a national government together with many other parties.

Shehan Malaka Gamage, a protest leader who has been campaigning for justice for the victims of the 2019 Easter Sunday attacks, said Wickremesinghe will likely make concessions to protesters due to his lack of a strong base.

“Unlike years ago … he has executive powers but without a firm political base. Therefore, in my opinion, he is a very weak leader,” Gamage told Al Jazeera.

“If the protesters could challenge [the] all-powerful Rajapaksas, he knows it is not difficult for the masses to rise up against him. He knows he was not elected by the people. This is not his comfort zone. And I don’t think of this as a defeat in our struggle. We have already won our struggle.”

She said that if he delivers reforms and relief to the masses, Wickremesinghe could calm unrest and buy himself time.

“Our next option [to remove him] would be the next election,” Gamage said.