Home » ‘How can we cope?’ ask Sri Lankans as gov’t limits fuel imports

‘How can we cope?’ ask Sri Lankans as gov’t limits fuel imports

Colombo, Sri Lanka – Mothers, taxi drivers, health workers and many other Sri Lankans are raising serious concerns over the government’s announcement that fuel imports will be restricted for another 12 months.

“Life is already so difficult, everything is so expensive and everything has changed. How can we cope with this for another 12 months?” Sumika Perera, a mother of two from the northern town of Kurunegala, told Al Jazeera on Tuesday.

Perera, who heads a Women’s Resource Centre, a non-governmental organisation in Kurunegala, said in addition to her anxiety about her two sons being forced to wait for hours in fuel queues, it was very stressful to listen to the stories of other women as part of her work.

Perera’s husband is a heart patient and cannot queue for fuel.

“I can’t continue my fieldwork on women any more as field officers have no means of transport. Transport cost and food prices have already gone up by three to four times,” she said.

“Tuk-tuk drivers would ask you any amount they wish. Not only that, bus fares have gone up, you can’t get into a bus – they all are packed.”

Several people have been killed following scuffles in the fuel queues. There are also reports of the wealthy and powerful bypassing the queues at fuel stations.

“My son waited for five days to get diesel for our van. Recently, the fuel station got some fuel but I think less than 10 vehicles were issued diesel. There are so many irregularities. I am afraid to send my sons but I have no other option,” Perera said.

“I actually can’t cope with this. I work with some female teachers who told me about children fainting as they hadn’t had their breakfast or dinner the previous night. It is all very stressful. I can’t even eat what I cook when I hear these stories.”

Antonina Potapova, a Ukrainian woman currently living in Sri Lanka, told Al Jazeera that fuel was stolen recently from her motorcycle when it was parked outside her residence.

“More than half of the petrol that I got standing in the queue was stolen. It was also stolen from another Ukrainian lady who is my neighbour,” she said.

“So I bought one litre for 3,000 rupees today and posted a message on my motorcycle, saying I have no petrol.”

Sri Lanka, facing its worst economic crisis in seven decades, has been grappling with a lack of essentials, including fuel, gas and medicines, for months, after its foreign exchange reserves ran dry because of economic mismanagement and the effects of the COVID-19 pandemic.

Energy minister Kanchana Wijesekera on Monday said fuel distribution will be restricted for 12 months because of a severe shortage of foreign exchange. 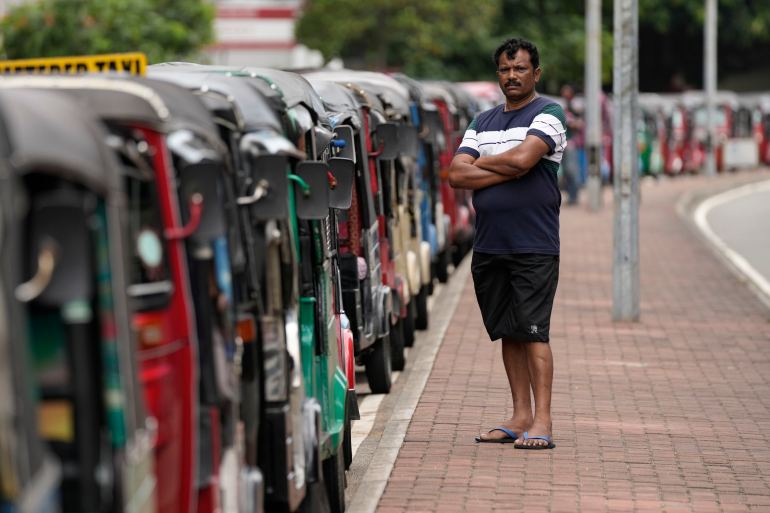 An auto-rickshaw driver waits in a queue near a fuel station in Colombo [File: Eranga Jayawardena/AP]

Taxi drivers say they will be among the worst affected by the government’s decision.

“I have two children and I also look after my mother,” Chandana Vijith Kumara told Al Jazeera.

A resident of Mahiyangana, about 200km (124 miles) from the capital, Colombo, Kumara lives in the city to make a living and used to visit home every month before the economic crisis hit the island nation.

“I have been happily married for 19 years and until now we didn’t have any family issue. I provided everything I could to my wife, children and the mother. But now cracks have appeared in my family relationship as I couldn’t visit home for more than 10 weeks,” Kumara said.

“My wife asks me to come home at least for a short period but I don’t have time as I stay in fuel queues when I am not working. Earlier I could send enough money home but now I am not earning enough to fulfil their requirements. Children who don’t understand the situation are asking for the same things. It is a very tense relationship now.”

Under the new rationing system announced by the government, small cars will be given 16 litres of petrol per week. Kumara says it is not enough for even one day’s consumption.

“I can’t continue with this job with just 16 litres of petrol a week. This is why people jump queues and try other improper means to get fuel. This is why some people even become thieves,” he said.

Though the government later increased the quota to 20 litres a week of petrol and diesel for cars, Kumara says even that is not enough.

Sri Lanka also reopened its schools on Monday after fuel shortages and political unrest kept them closed for nearly a month.

However, public sector employees have been asked to continue working from home for another month, the government said in a circular on Sunday.

Dr Nishantha Samaraweera, who works at Karapitiya hospital in Galle, told Al Jazeera the health sector would be another essential service that could be crippled as a result of the government’s announcement.

“The public transport system in Sri Lanka is inadequate and doctors aren’t given any accommodation near hospitals,” he told Al Jazeera.

Samaraweera, vice president of the All Ceylon Medical Officers’ Association, said doctors and health workers should be given a special quota for fuel.

“The government tried several systems but none of them worked. What is happening now is this queueing system is leading to certain conflicts. I know very well that Sri Lanka has already got enough fuel for weeks but it is not being distributed. The government should either provide a transport for the health workers or give them a special quota,” he told Al Jazeera.

Meanwhile, at Perera’s house in Kurunegala, her two young sons are getting ready to line up for fuel for their van and the motorcycle.

“Mothers are anxious when their sons join the ‘Aragalaya’ (the Sinhala word for ‘struggle’), but they are more worried when they go to a fuel queue,” Perera told Al Jazeera.