When Fernando Sugath arrived in Lebanon in the mid-1990s, cricket was an underground sport. Literally. After living in Beirut for a year as one of the country’s 80,000 Sri Lankan migrant workers, a fellow countryman he met in a supermarket invited him to a game. “I had been looking for somewhere to play,” says Sugath. “Also, I didn’t have any friends.” He turned up at the address he was given to discover the players crammed into a tiny underground car park beneath an apartment building.

Sugath is a man used to improvising. “As kids we didn’t need a big playing area or good equipment to play,” he says. “We used plastic balls, the old base of a coconut leaf for a bat.” Within 10 years, he had founded Nomads CC, who played in another, open-air car park behind a Jesuit church. Sugath was the captain, star batter and organiser extraordinaire.

In 2005 they staged a tournament for migrant workers in the excavated foundations of a yet-to-be-built high-rise. The Sri Lankan ambassador was in attendance, but that didn’t prevent the Lebanese army surrounding the players with guns and demanding to see everyone’s papers. Of the 500 people present, 30 were detained for not having the correct documents; it cost the community $35,000 to bail out their friends and colleagues.

While attention is fixed on the football World Cup, and sport reckons with the treatment of migrant workers in Qatar, the far smaller-scale tale of cricket in Lebanon is worth considering. It is an upbeat one too, although it has not been without trials and setbacks. A few weeks ago, Sri Lankan migrant workers returned cricket to the streets of Beirut after a five-year ban – and in doing so, mounted a celebration of everything we want and hope sport to be.

The 36-team Sri Lankan Ambassador Trophy tournament that took place at the end of September transformed the car park behind the Jesuit church into a mini-festival site. There were DJs and dancing, a calypso band and all manner of stalls selling South Asian street-food. Most of the players were migrant workers, some were Syrian refugees; there were teams from the British and Australian embassies, others which had travelled from Damascus, and no fewer than four sides representing the Indian and Pakistani peacekeeping troops that serve on the Blue Line bordering Israel.

There had been such cricket gatherings in Beirut in the past, although none quite so big. The local rules are well known: if the tennis ball hits the wall behind the wicketkeeper, the batter gets a bye and swaps ends; if it goes into the trees behind the bowler’s arm, they can run for as long as it takes to re-emerge without fear of being caught. The five-over games went on all day; when Sugath was asked by a local reporter what it meant to see so many people enjoying the game, and each other’s company, he wept.

For 26 years, cricket has been the activity that ameliorates a hard life, thousands of miles from his family in Sri Lanka. He works 12 hours a day, six days a week, for a furniture depot. His employer treats him well; when Sugath first arrived he worked as a cleaner and now he is the boss’s PA. It is a rare example of personal development in the exploitative kafala system practised in the Gulf states, that gives employers control over their employees’ immigration status. 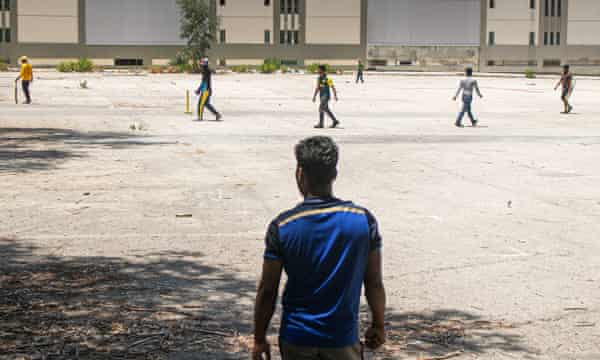 Members of the Bangladeshi community play in Beirut in July 2020. Sri Lankan Fernando Sugath says: ‘When we’re at work, every one of us is counting the days til Sunday.’ Photograph: Amer Ghazzal/Shutterstock

But the economic crisis in Lebanon has halved the value of Sugath’s monthly earnings and when he finishes his day job he returns to the small subterranean maids’ room – bed, toilet and gas hob almost abutting each other – where he has a second role as the building’s concierge. His sacrifices have enabled him to send home enough money to build a house for his parents, his brother and himself. But the light at the end of each week is cricket. “It makes my life here much easier to handle,” he says.

In 2017 the owners of the car park suddenly and unexpectedly refused permission to play cricket there, threatening to have anyone who showed up arrested. With a dearth of alternative venues, the scene threatened to wither and die. A new women’s project at a camp for Syrian refugees, Alsama Cricket, meant the game continued to be played in Lebanon – but not by the migrant workers.

It has taken five years to reinstate permission to use the car park – and when the game finally returned, it brought together the workers with the refugee players for the first time. “These two disparate communities have never had any interaction before,” says William Dobson, a Beirut bookshop owner from England who co-founded the September tournament with Sugath. “Now these teenage refugees who have only been playing for three years are turning up each week to learn from 50-year-old Sri Lankan guys.”

There were four teams of women at the tournament, including some who were playing for the first time. “After that we realised how excited women are to play cricket,” said Sugath. “Now we have 10 women’s teams practising every week.” He recalls how a woman called Pradeep told him: “For six days of the week I’m in Lebanon and I’m nobody. On Sunday I come to cricket and I’m back in Sri Lanka again.”

Dobson says: “In England it’s easy to take cricket for granted. But for a 50-year-old Sri Lankan woman who has lived in Beirut for 30 years, and hasn’t seen her family for two years, to be with other women in a similar situation and connecting to something from their homeland and their childhood – that’s something else.” Sugath has already arranged for a women’s tournament at the end of November. “When we’re at work, every one of us is counting the days til Sunday,” he says.