Home » Hussain's Australian visa means he hasn't seen his family in nine years. He and other refugees want urgent change

Hussain's Australian visa means he hasn't seen his family in nine years. He and other refugees want urgent change

written by Top Stories Mon Sep 19, 8:16 pm Source
16 June 2013. The date is etched in Hussain Hussain’s mind.Because that was the day he arrived in Australia.And the day he last saw his wife and children.

A Rohingya Muslim, Mr Hussain was escaping the atrocities inflicted upon his ethnic group in Myanmar in 2013 with his wife, two daughters and one son. A Rohingya Muslim who escaped Myanmar in 2013, Hussain Hussain hasn't seen his family for nine years due to the travel restrictions on his Australian visa. Credit: Akash Arora

But following an unpredictable series of events, he ended up in Australia, while the rest of his family found themselves in Thailand as refugees.“At that time, my oldest daughter was 14, my son was 13 and my youngest daughter was two years,” Mr Hussain told SBS News.

“Now they’re in their teens and twenties and I haven’t seen them for so long,” Mr Hussain, who has a Safe Haven Enterprise visa (SHEV) and is not allowed to travel overseas, said.

A widespread problem for refugees

Mr Hussain is not alone.About 19,000 refugees in Australia are either on SHEVs or Temporary Protection Visas.While the visa categories allow them to live and work in Australia, they don’t enjoy the same rights as many other visa holders or Australian citizens when it comes to studying, working or travelling overseas.SHEVs are for five years and TPVs for three years and holders can apply to have them renewed.

Hundreds of refugees like Mr Hussain gathered outside Sydney’s Town Hall on Sunday afternoon to participate in the No-One Left Behind rally organised by grassroots campaign group Refugee Action Coalition. Vinothini Selvarasa – a Sri Lankan Tamil who escaped war crimes in her country and relocated to Australia in 2009 – was at the rally, too.Ms Selvarasa has worked as a cleaner in Australia for several years and contributed to the country’s workforce but, because she’s on a SHEV, her daughter is considered to be a foreign student.

“My daughter will soon be old enough to go to TAFE, but I don’t have the money to cover the cost of her education,” Ms Selvarasa told SBS News.

Kalyani Inpakumar, who was also at the rally, is the NSW co-ordinator for the Tamil Refugee Council.She said many refugees face the challenges Ms Selvarasa is encountering.

“There are children who need to go to university next year but because their parents are on TPV or SHEV, they are considered to be foreign students, so they have to pay full fee,” Ms Inpakumar told SBS News.

Ms Inpakumar highlighted some other challenges faced by those on TPVs and SHEVs.

“It’s very hard for them to buy a home, get a job and to set down roots in Australia,” she said. 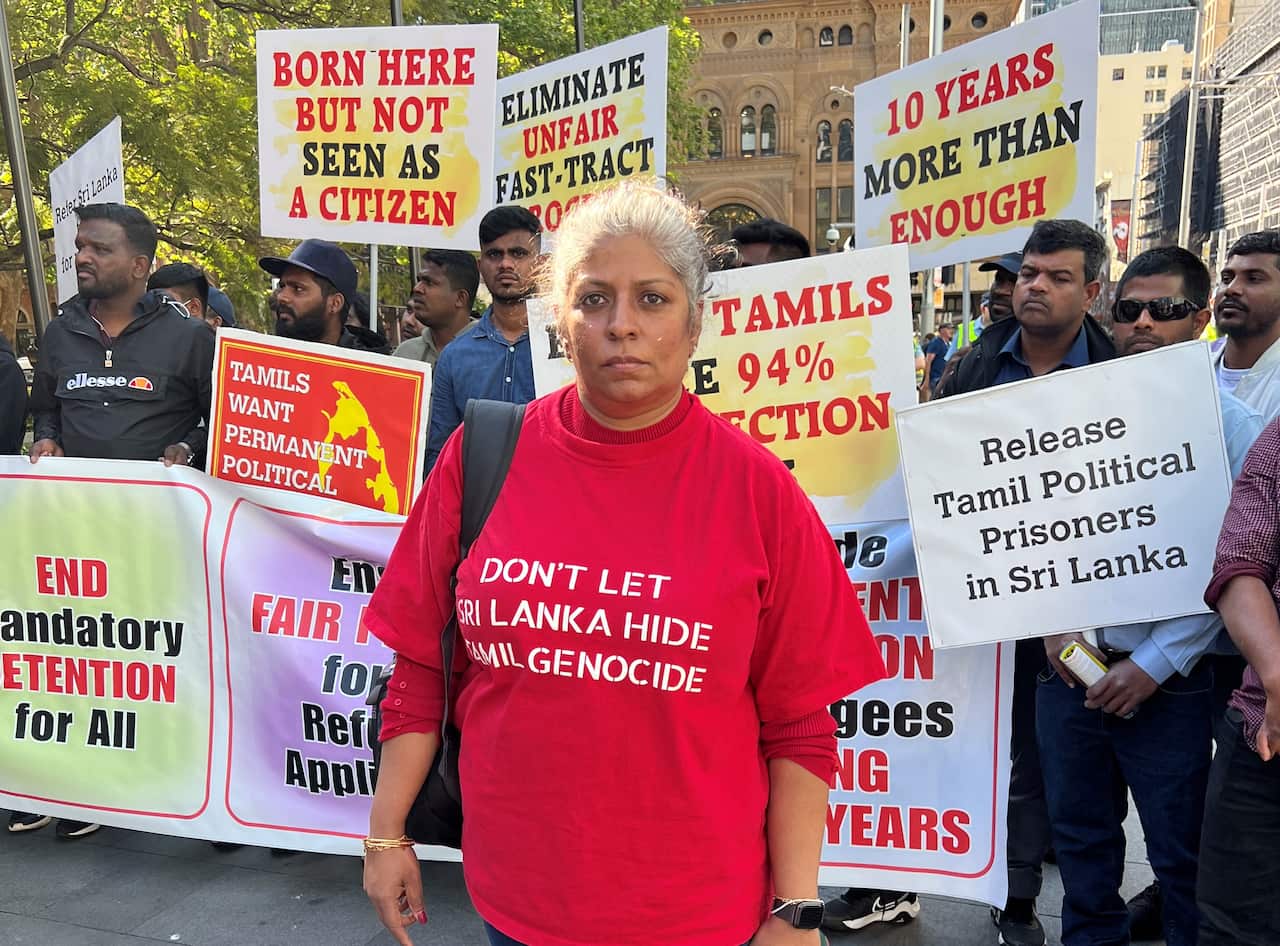 .A similar protest rally was organised by the Refugee Action Coalition in Canberra on 6 September.While that protest was underway, Andrew Giles – Minister for Immigration, Citizenship and Multicultural Affairs – posted a message on his social media channels saying the Albanese government will keep its promise.

“The Albanese Government has made a commitment to transition those who have been found to be owed our protection on temporary protection visas to permanent protection – we will keep this promise, and meet our commitment as soon as possible,” Mr Giles wrote on Twitter and Facebook.

But Ms Inpakumar said while the government has made the promise, no specific timeframe has been released.

“We’re very happy that they’ve made the announcement that all TPV and SHEV holders will be given permanent protection, but it would be nice to know what the process is going to be and when that will take effect,” she said.

Ian Rintoul is the spokesperson for the Refugee Action Coalition.

He told SBS News there are about 12,000 asylum seekers who are living on bridging visas in Australia, in addition to 19,000 refugees who are on SHEVs or TPVs.

He said their circumstances are even more “precarious”.

“The bridging visas are often only issued for six months and that [leads to] all the difficulties with jobs, with rental, with Medicare, with schools,” Mr Rintoul said.

Everything for them is even more difficult and more precarious for sure, including income support.

Ian Rintoul, spokesperson for the Refugee Action Coalition “Everything for them is even more difficult and more precarious for sure, including income support.”

According to Mr Rintoul, while there’s some light at the end of the tunnel for TPV and SHEV holders thanks to the Federal Government’s promise to grant them permanent visas, there’s nothing in the government’s scheme for asylum seekers in Australia on bridging visas.

“We need a far more expansive commitment from Labor than what they have committed to already, " he said.

“It’s great that they’re talking about the TPVs and SHEVs but the bridging visas is something they still need to address."