I can turn around Sri Lanka’s economy: PM Ranil Wickremesinghe

Colombo, Sri Lanka – Ranil Wickremesinghe, the newly appointed prime minister of crisis-hit Sri Lanka, has said he is confident he can turn the economy around – but cautioned it will take 18 months before stability returns.

“The year 2023 is going to be difficult, but by 2024 things should pick up,” Wickremesinghe told Al Jazeera last week [Thursday] in a wide-ranging interview at his official residence in the capital, Colombo.

The 73-year-old leader, who in May became prime minister for the sixth time, said that he took up the job under extraordinary circumstances.

“We had nearly two days without a government; things were getting out of hand,” he said, recalling the mass protests over shortages of fuel and electricity that forced Mahinda Rajapaksa, his predecessor and the brother of President Gotabaya Rajapaksa, to resign.

“I thought ‘the situation is bad, it’s your country, so you can’t be wondering whether you are going to succeed or not. You take it over and work to succeed,’” said Wickremesinghe, who met the president at the request of some MPs from the ruling Sri Lanka Podujana Peramuna party.

“I have confidence I can turn the economy around,” he said.

The island nation of 22 million has been brought to a virtual standstill due to acute shortages of fuel and essential items such as food and medicines, as the government ran out of foreign reserves to import commodities earlier this year.

Sri Lanka defaulted on its external debt in April and the usable foreign reserves are so low that it has struggled to cover its needs from the international market.

In Colombo, the roads are nearly empty. Some long queues can be seen near the few petrol stations that are still open, but educational institutions, businesses and government offices remain shut. Hotels in the capital – once full of tourists – are struggling to stay afloat due to a sharp drop in guests.

Worst crisis since independence in 1948

Wickremesinghe, who has been tasked with lifting the country out of its worst crisis since independence in 1948, said there will be petrol shortages until at least July 22, when the next shipment is expected.

“We are buying fuel either using Indian credit lines or the foreign exchanges that we get from remittances. It’s [remittances] a small amount, but nevertheless, sometimes we get a billion dollar[s] or a billion and a half. The rest of the reserves from what we got from the creditors have already been busted,” he said. 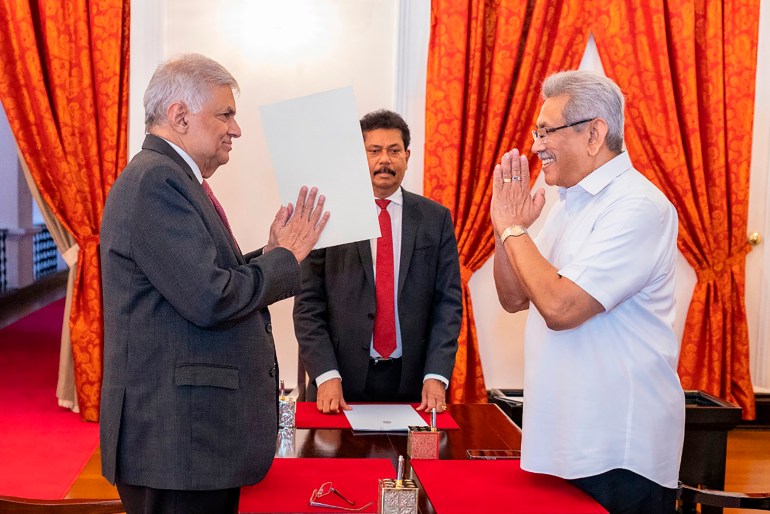 Food inflation has risen to nearly 60 percent, while the crashing of the Sri Lankan rupee by more than 80 percent since March has further eroded people’s purchasing power.

Last month, the prime minister said the economy had “collapsed”.

“It’s a big setback to the economy and caused lot of hardship to the people … We have been taking steps … especially to get gas, which will be available in the next few days,” he told Al Jazeera, adding supplies of diesel and furnace oil have also been made.

“The issue has been petrol … and that will take a bit of time.”

Furthermore, the prime minister added that a gas deal has been secured, with most of the funding coming from the World Bank, which will ensure supplies for the next four months.

Sri Lanka has held talks with the International Monetary Fund (IMF) and the World Bank as it seeks to overcome the financial upheaval brought by decades of import-oriented policy, as well as economic mismanagement – including an ill-thought-out ban on fertilisers and tax holidays for corporations and the wealthy, under the government dominated by the Rajapaksa family.

“We seem to have come to an agreement with IMF at the staff level. And this is needed to stablise the economy,” Wickremesinghe said, adding he would reveal further details in parliament this week.

The prime minister also said his government was planning to bring in an interim budget, most probably in August.

Meanwhile, protesters have been camping at the Galle Face in Colombo since April and demanding the removal of President Gotabaya Rajapaksa, blaming him and his elder brother, Mahinda Rajapaksa, for bringing the economy to the ground.

They also call for the removal of the executive presidency as part of the push for political reforms.

Wickremesinghe said that he backed the protesters’ demand for a change in the political system.

“I do not think protesters have very many demands; they just want a change,” he said. “It’s not just about abolishing the executive presidency. How do you make the parliament strong?”

“Young people … feel that they have been left out by the present system and that’s a valid point that they have made and parties have to open up,” Wickremesinghe added. He said that young people need to be given a platform to get into politics so that they will be able to shape the future of the country.

“I have made some proposals regarding the change in parliamentary structure, and referred it to the former Speaker Mr Karu Jayasuriya; his report is available, both will be tabled in parliament, most probably on Wednesday,” Wickremesinghe said.

He has proposed increasing oversight of the parliament and involvement of parties in governance.

The veteran leader, who is seen as having good ties with the West, said he had been trying to get the support of a diverse group of countries, including India, China, Japan, the United States and the United Kingdom, as well as from European Union member states.

“The main players are Japan, India and China. Japan has expressed interest in having Tokyo as a meeting place for a donor conference,” the prime minister said.

“This will be a unique conference,” he said on the participation of two members of the QUAD – India and Japan – and China, which runs the global infrastructure project the Belt and Road Initiative.

“So it will be a geopolitical conference of interest,” he said, adding that he has been talking to both India and China – regional rivals who have jostled to get a foothold in Sri Lanka.

‘India has always been a major player’

“India has always been a major player. They can’t have instability at their doorstep. Instability in Sri Lanka is not in India’s interest,” Wickremesinghe said.

Some foreign policy analysts, however, have pointed out that China, Sri Lanka’s third-biggest lender, has been slow to respond to the crisis in the island nation. They say Beijing is upset because the Rajapaksa government cancelled infrastructure projects last year by Chinese companies. 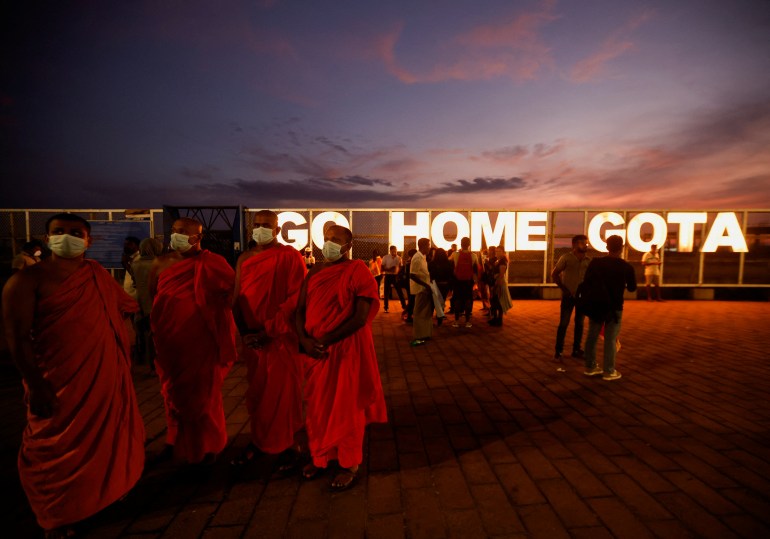 Protesters have been demanding the removal of President Gotabaya Rajapaksa, blaming him for the economic collapse [Navesh Chitrakar/Reuters]

But Wickremesinghe denied any tension in the ties with China.

“I have been talking to China ever since I took over. Contracts with Chinese companies were cancelled, but the previous government cancelled contracts with Japanese companies, MCC [Millennium Challenge Corporation] and contracts with India. So in a way, the former government has been even-handed,” he said, with a wry smile. MCC is a programme run by the US government through which it grants funds to countries for infrastructure projects.

The prime minister also commented on the recent controversy over the awarding of a wind energy project to the Indian conglomerate Adani Group.

“Adani has been here for a while. They actually came here first on this East Terminal issue where Japan and India got together, and Indians nominated Adani. But the then-government cancelled it. Unlike the Japanese who went home, Adani stayed. He [Adani] got hold of John Keells and got the West Terminal. So, he knows how to invest in Sri Lanka.

“He [Adani] doesn’t need to ask [Indian] Prime Minister [Narendra] Modi,” he said over allegations that Modi pressured Gotabaya Rajapaksa to award the wind energy project in favour of Adani, who is seen as close to the Indian prime minister.

“I have seen the proposal [by Adani] and it is a good proposal, I must say. They will invest $500m. It will be a part of exporting energy to India. That’s good because we have so much power,” Wickremesinghe said.

Members of civil society and organisers of the protest movement, known as #GoHomeGota, have accused Wickremesinghe of doing little to ease the fuel and food crisis nearly two months since he took over as prime minister.

They plan to organise nationwide protests on July 9 to mark three months since the beginning of the #GoHomeGota demonstrations.

Protesters say the acute shortages continue, affecting the livelihoods and nutrition of millions of people. 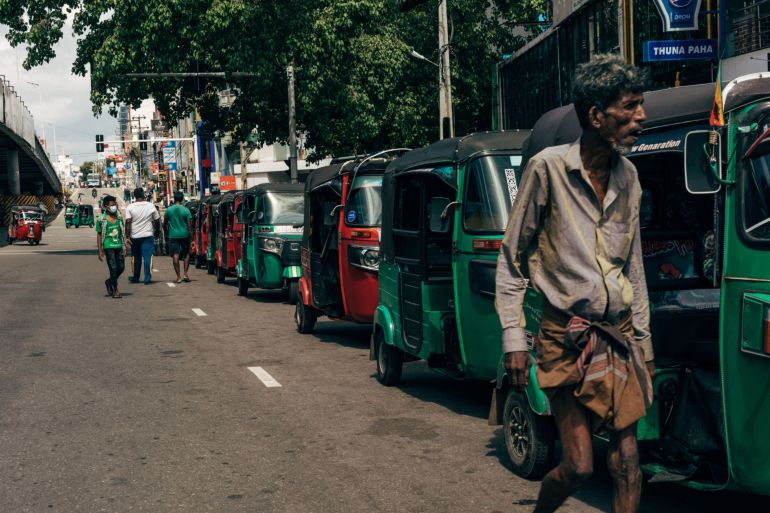 Wickremesinghe admitted there has been a drop in nutrition standards and said his government has set up a food security programme.

“We plan to allocate about rupees 200 billion [$560m] from the interim budget for welfare. We have already set aside money. I hope that will be enough with the food programme we are planning.

“I don’t want anyone to starve. People have already started some community kitchens in Colombo city, and this can spread. But we are taking steps so that no one goes hungry.”

Wickremesinghe said he planned to make Sri Lanka self-sufficient in terms of food from 2023 onward, amid fears of a global food crisis next year as the war in Ukraine grinds on.

He said the cultivation seasons from November [2021] to January-February 2022 were a failure because Sri Lanka had no fertiliser – a shortage that also marred the June-to-September season.

“We are going all out to get sufficient funds so we can start the next season that starts from October-November to about January-February 2023. We need about $500-600m. Once we get the fertiliser, seeds and other chemicals, and if there is no drought, then we will be self-sufficient in food from 2023,” he said.

The prime minister also said that Islamophobia had no place in Sri Lanka. The government headed by the Rajapaksas was accused of demonising Muslims, particularly in the wake of the deadly 2019 Easter Sunday attacks and also during the coronavirus pandemic.

Wickremesinghe welcomed the removal of a ban last week on Qatar Charity, Qatar’s largest NGO, that was imposed after the April 2019 bombings that left 256 people dead. 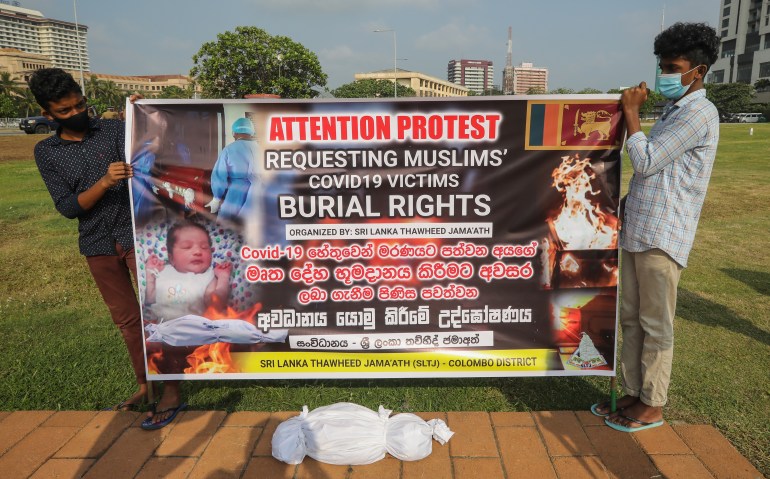 The Sri Lankan government headed by the Rajapaksas was accused of indulging in Islamophobia in the wake of the deadly Easter Sunday attacks [File: Chamila Karunarathne/EPA]

The former interior minister had falsely claimed in parliament in July of last year that Qatar Charity – which works with multiple UN humanitarian agencies – was banned by the UN.

“I am happy it has taken place,” Wickremesinghe said, referring to the removal of the ban on Qatar Charity. “It will happen with other prohibitions also.”

He said the removal of the ban was delayed due to COVID-19 and other issues, but many experts say the U-turn by the Sri Lankan government comes as the country is desperately looking to energy-rich Gulf nations for fuel supplies.

“We are reaching out to the Middle East countries,” Wickremesinghe said, days after Sri Lanka’s energy and power minister visited Doha, the Qatari capital.