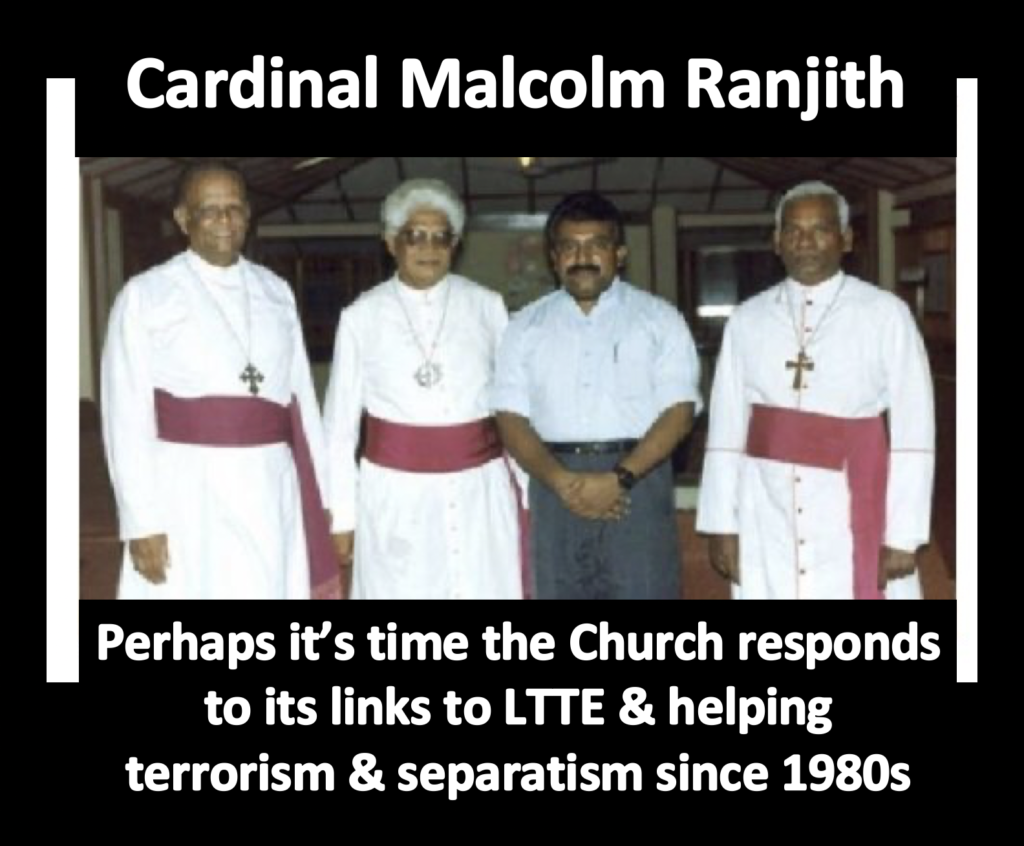 Cardinal Malcolm Ranjith is calling for justice for Easter Sunday, we all want justice, but why didn’t he call for justice for the victims of LTTE crimes? He doesn’t do so because the Church was heavily involved in the LTTE-Eelam-separatist project as part of West’s geopolitical & conversion agenda in South Asia. These are facts that are hard to swallow but facts that are unpalatable for the Church & its supporters to accept. The greater dravida nadu encompassing Sri Lanka and a separated Tamil Nadu would create a Pan-Christian State as a base for Western geopolitical interest and a means for the Church to increase their flock. The dual-project continues as a result of the stupidity of Asian leaders and the lascoreens and sepoys that slave for them. LTTE was simply an interim-beneficiary of a larger plan. The West must be toying with others which explains why they plucked Islamic terrorists in 2019.

The eventual plan in this larger agenda is to turn Tamil Nadu into a Christian state & eventually balkanize India. Sri Lanka is selected as the base. Note how the lobby are making investments in every sphere that they can influence people – communication networks (television, radio, social media, schools) they are putting up praying centres close to dharmic religions, foreign govts are funding faith-organizations, AID agencies are funding projects. Buddhists of Sri Lanka and Hindus of India are being systematically disempowered.

As we all know the Dravidian Movement & term Dravida Nadu was coined by Bishop Robert Caldwell. Therefore, the calls for a Greater Dravida Nadu connecting India & Sri Lanka is part of this larger plan. When pro-West Sri Lankan leaders push for connecting Sri Lanka to India by new rail-sea-road systems, we should realize that this is in line with that greater Christian agenda. LTTE was a Church mercenary outfit given a bogus cloak of championing Tamils. What it was doing was to use mostly Christian-Catholic Tamils to buy time & militarily create the Greater Dravida Nadu with the gun. Having failed that due to the defeat of the LTTE, the same project continues politically and via the Church.

The choice of LTTE’s international head quarters in London from 1970s and the manner no action is taken against LTTE fronts by Western Govts shows the tacit support for them & their larger project.

You can now understand why the West & its branches of global influencers are angry with the Sri Lankan government for eliminating the LTTE. Their ‘investment’ in the pan-Christian project came a crop with the death of Prabakaran & his ground force. The project continues now with LTTE fronts overseas and the pro-Church/West Tamils in Sri Lanka.

How far Prabakaran was aware of this greater plan will never be known but what we should deduce is that his supremacy was always limited to what stood within the Church agenda. Prabakaran did not dictate to the Church – the Church dictated to him!

Note the Christian link to most of LTTE top brass and sponsors, while others camouflage themselves in Hindu names & pretentious Hindu practices. How did Roman Catholic Anton Balasingham become the ideologue of the LTTE & his wife the trainer of LTTE child soldiers? The same applies to those that pretend to be Buddhists.

The Tamil clergy of India supported LTTE as did the Sinhala Catholic/Christian clergy & influential evangelical elites. 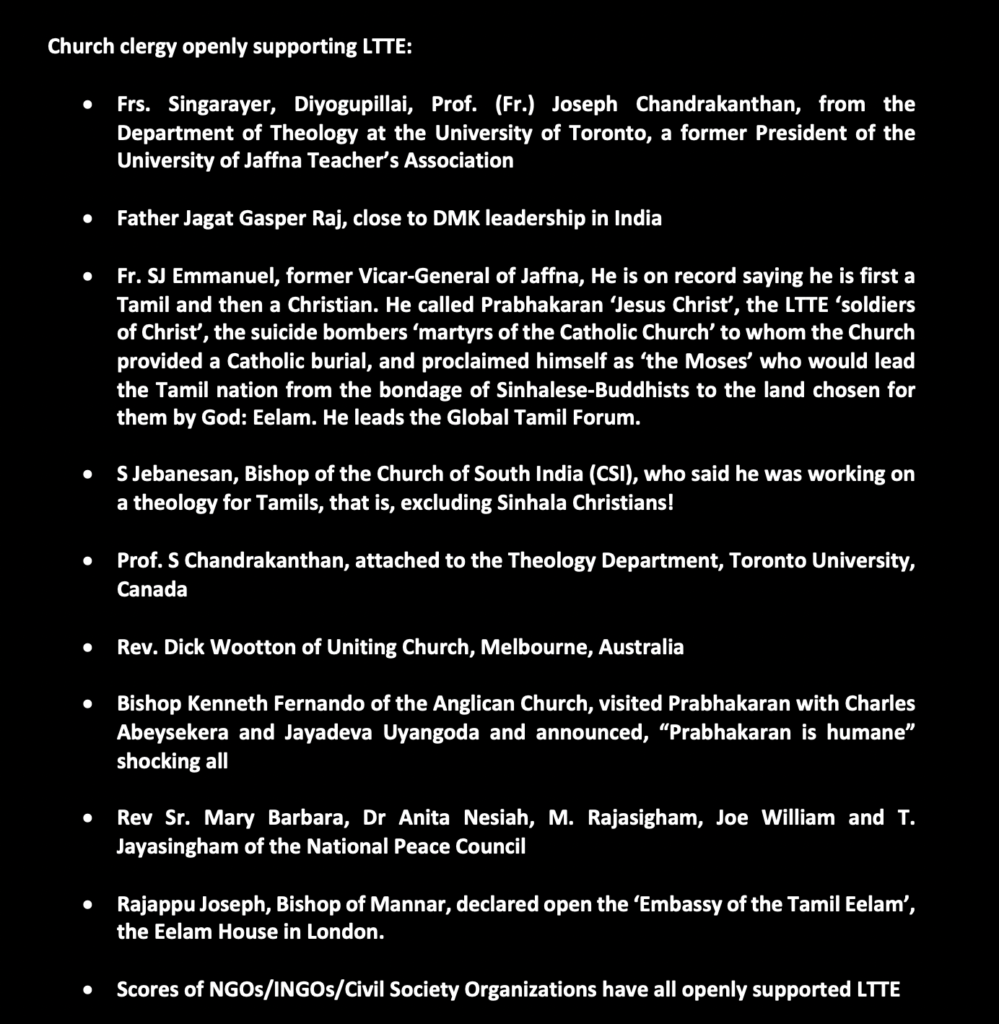 LTTE’s Voice of Tigers linked up with Radio Veritas, a Catholic service of the Radio Veritas run by Tamil Catholics in Tamil Nadu. LTTE’s Voice of Tigers had an office” inside St. Sebastians Church in Mallavi, Vanni. This office was operated by pro-LTTE Bishop of Mannar Fr. Rayappu Joseph who wanted the Sri Lankan soldiers out of Madhu but allowed LTTE to operate from inside the Church.

The National Christian Council of SL and affiliates are:

These have been working to balkanize Sri Lanka and colluded with LTTE in tarnishing the image of the country.

This is proven by the World Council of Churches promoting the concept of traditional homeland theory in 1994 at the UNHRC in Geneva.

National Peace Council was formed in 1995 with the backing of NCCSL donors, including Catholic Agency for Overseas Development, NORAD, SLIDA and a number of EU, German donor organizations.

NCCSL and supporters take great pains to deny that Sinhala Buddhists played a role in building the Sri Lankan nation. Favorite topics include state colonization”, Tamil homeland” ethnic war”, Sinhala Buddhist chauvinism”, genocide of Tamils” etc. They have never referred to LTTE as a terrorist organization and rarely mention its atrocities. Their reports and papers end up being quoted by the West.

You can understand why the concept of self-determination” is being pushed by these Church forces to facilitate creation of a Church-sponsored state.

Rev. Father Tissa Balasooriya needs special mention for his attempts to build bridges and unite people rather than disunite them.

It is not too late for Tamil Hindus to realize that they are pawns of the Pan-Christian State that initially used LTTE and now using LTTE Diaspora/Fronts & promoted by pro-Christian Tamil politicians.

Tamil Hindus are not part of the greater Christian-Eelam ProjectThe separate state called Eelam was not meant for Tamil Hindus to rule.LTTE did not speak on behalf of Tamils discriminated in other parts of the worldThe propagation of secularism” is a Christian-West dominated term where the principles are created by the Christian-West and not by dharmic principles.All of the moderate Tamil Hindu leaders, politicians, academics and respected people of Tamil society were killed by LTTELTTE Prabakaran or the support-base has done nothing to protect or foster Tamil Hindu culture.All of the sites being forcibly taken on the pretext of it being hindu” eventually gets taken over by Church elements!How many Hindu homes and property have the LTTE taken over?Pro-Christian LTTE lobby has always taken pains to create rifts between Hindus & Buddhists / Sinhalese Buddhists & Tamil Hindus. Note how pro-Christian media channels take pains to chagrin Buddhists & Hindus. Note the pro-Christian humanitarian organizations set up over 3 decades employing mostly pro-Christians. Note how western embassies also employ pro-Christian staff. The other noteworthy Christian ‘investment’ is to plant Christians into ruling families or influential business persons via marriage. Generous donations are given to ‘silence’ politicians.LTTE ruled over 90% of Tamil Hindus through fear.LTTE’s use of ‘caste’ was only part of a long term plan

The strategy of the evangelists is to continuously provoke people who do not agree with their line of thinking by provoking their opponents & thereafter carrying out a campaign against those that reacted to their provocation using all of their pro-Christian media.

However most Christians are ignorant of the pan-Christian geo-regional plan. To many, these notions are unacceptable but those that make the links will understand the greater picture and the bigger objective. These goals are hidden behind the ‘spiritual’ ‘political’ ‘charity’ ‘development’ ‘diplomacy’ camouflages.

Just as the plan is to destroy the Hindu control over Tamil Nadu initially & thereafter entire India, the simultaneous other plan is to break the control of Sinhala Buddhists in Sri Lanka. This is why the pro-Christian & pro-Islamic lobbies which are all controlled by the West are anti-Sinhala Buddhists and have their ‘investments’ in every realm of society that can influence people both at official and unofficial / public & private levels.

There are none so blind as those who will not see”
written by &quot;Tamil,LTTE,SriLanka&quot; - Google News Sat Jul 09, 2:04 am Source