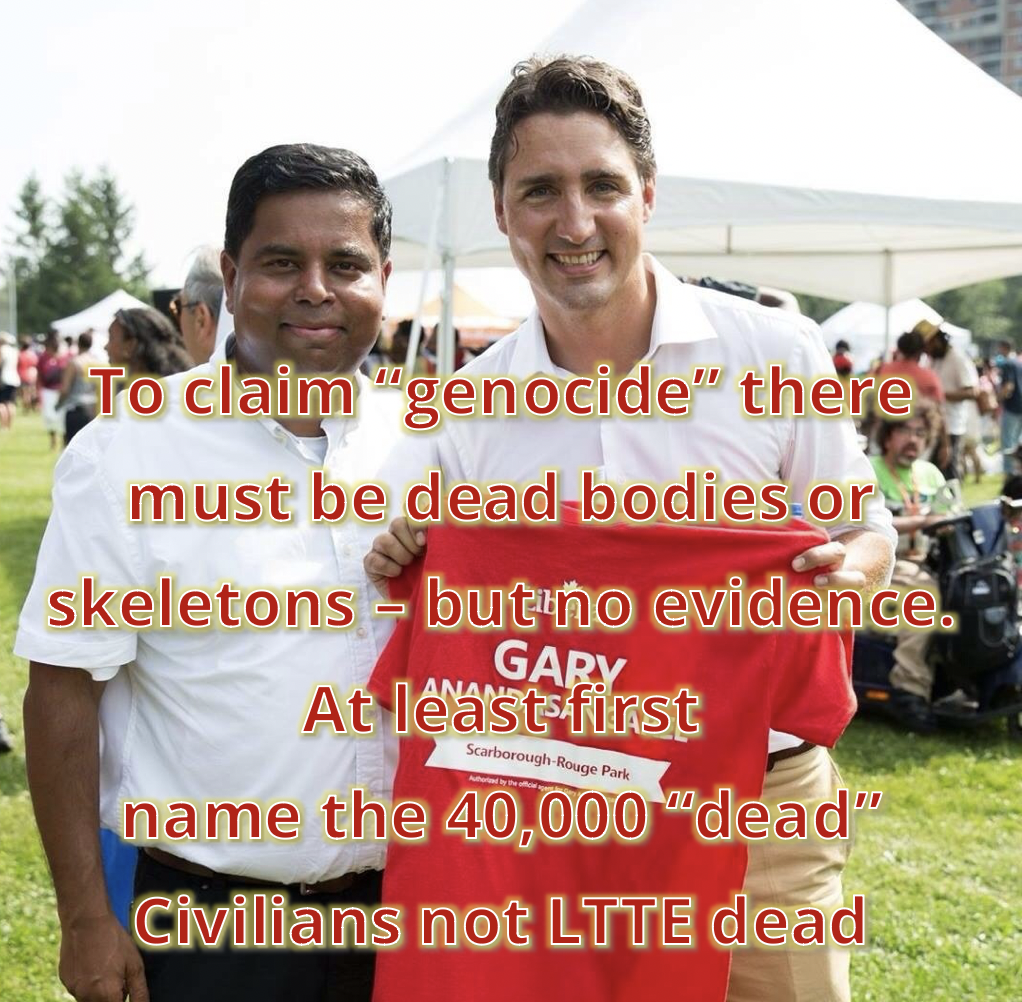 We challenge anyone & any country accusing Sri Lanka of genocide” to place their facts first.

These facts should give a good background knowledge of what LTTE is & what LTTE did to not only Sinhalese, Muslims, foreigners but also Tamils.

LTTE emerged not after the July 1983 riots but in 1972 as TNT and thereafter in 1976 as LTTE.LTTE only hijacked the separatist objective from separatist Tamil political leaders to justify their militancy & used 83riots as a smokescreen to create an ethnic” label to a separatist quest.LTTE is an international proscribed terrorist organization banned by 32 nations & continues to be banned even after LTTE ground force was militarily eliminated in May 2009.LTTE killing began in the 1970s killing initially Tamils – first the Mayor of Jaffna, then Tamil policemen on duty & thereafter Sinhalese soldiers on duty.LTTE killed Sinhalese, Muslims, Tamils even foreigners (an entire British family was killed when LTTE bombed a Sri Lankan plane) & killed even on foreign soilLTTE was banned by Sri Lanka in 1978, in 1998 and thereafter since 2006.Sri Lanka’s military offensive was against Terrorists not Tamil civilians – any Tamil civilian engaged in hostilities either by force or volunteering for LTTE loses his/her status as a civilian. Any deaths arising as a result of cannot claim to be civilian. The laws of war is clear about this.Sri Lanka does not need to reconcile with terrorists – Sri Lankan Army are not Sinhalese though LTTE were all Tamils but All Tamils are not LTTE. Only pro-LTTE Tamils seek a separate state not non-LTTE/TNA Tamils. LTTE were supported by non-Tamils that include Sinhalese, Muslims, foreigners, NGOs, Civil Society, diplomats, UN officials & even the Church.There have been countless ceasefires, 5 failed peace talks, negotiations in Sri Lanka & overseas but LTTE killings, assassinations, bombings, suicide missions did not stop & only in 2006 that Sri Lanka decided to militarily defeat LTTE. The infamous Norway brokered ceasefire saw over 3000 violations by LTTE that went on paper only.NO UN – NO WESTERN GOVT – NO FOREIGN ENVOY – NO HR GROUPS came forward to STOP LTTE throughout 30 years of LTTE terrorattacking villages, killing villagers, chasing them from their homes, shooting unarmed civilians worshipping, cutting pregnant mothers & babies, planting bombs on roads, trains & buses. But now these entities are screaming ‘accountability’So-called International Community DID NOT STOP LTTE kidnapping Tamil children turning them into child soldiers inspite of compiling reports/statistics about themSo-called international community knew about LTTE illegal networks run by Tamils living on their soil and operating from their countriesmanipulating their systems and even duping their citizens (credit card scams, illegal human smuggling, illegal arms trade, money-laundering, hawala system) etc but did very little to stop them.UN/Western Govts continue to do nothing against the woman (Adele Balasingham) who not only trained Tamil children to killbut instructed them to bite cyanide capsule & commit suicide.Decision to defeat LTTE militarily came after enduring 30 years of terror & over 300 suicide attacks & failure of 5 peace talks, negotiations, ceasefires.Sri Lanka would not have endured LTTE terror, had India allowed the capture of Prabakaran in May 1987 when cornered in Vadamarachchi. India not only threatened action against Sri Lanka but whisked Prabakaran & family to Delhi in helicopters. There would have been no war in Sri Lanka after 1987 had India not given a lease to Prabakaran to continue his terror. What prompted the decision to militarily defeat LTTE? In 2006 LTTE made its biggest blunder by closing the Mavil Aru anicut committing a war crime by denying water to farmers. The military was called into open the sluice gates, LTTE attacked, the armed forces retaliated, LTTE attacked villages & military was called to action resulting in the liberation of East Sri Lanka in July 2007 & liberation of North from LTTE in May 2009. Opportunity was given by the GOSL to foreign govts / diplomats/ NGO heads via Consultative Committee meetings held twice weekly enabling them to put their issues and questions on the table. From the Govt side the invitees were briefed on the food, medicines sent to the conflict areas – if there were any shortcomings the invitees should have posed the questions at these meetings.

Why are they posing questions years after the war ended?

Here’s some questions for Canada to answer.

First it is important to picture the groups inside the conflict zone.

Therefore, if everyone had some form of arms & ammunition we cannot be certain who shot whom & who died as a result of whose shooting.

This was an armed conflict. There are casualties on both sides. It is against armed warfare to subject civilians to risks. It was LTTE that took Tamils to be used as human shields & hostages. Had LTTE not taken Tamil civilians the armed conflict would have been between LTTE & Sri Lanka’s Armed Forces. It was LTTE that put civilians in harms way. LTTE must be accountable for subjecting civilians to risks by keeping their armour amongst civilians & shooting from amongst civilians. In an armed warfare, it is the right of the other party to fire back. LTTE cannot fire keep civilians among them.

When even the UN Secretary General, diplomats also requested LTTE not to shoot at Tamil civilians, it is clear that LTTE were shooting at civilians who were trying to flee LTTE.

If LTTE was their hero, would civilians wish to flee LTTE?

LTTE shot Tamils attempting to flee to prevent them leaving LTTE as that would have reduced the people LTTE had to use as hostages & human shields.

People came to the Sri Lankan Forces not fled from them.

People fled LTTE & they faced LTTE fire. There are plenty of witness accounts to prove this.

Can those making allegations, please quote the numbers!

If they can quote the dead, they should be able to quote the number of people who tried & failed to flee & got shot dead.

How many Tamils did LTTE kill?

Those that came to the armed forces were taken to the camps set up to feed and shelter them. It was also inside one of these camps that a LTTE posing as a civilian blew herself up killing 20 soldiers include 3 female soldiers & 8 civilians while injuring over 40 civilian refugees.

It is also to be noted that close to 12,000 LTTE terrorists surrendered in civilian clothing to the Armed Forces including 584 child soldiers. All were put through rehabilitation. The child soldiers were given a presidential pardon, returned to school, given vocational training & the armed forces even arranged marriage ceremonies for the LTTErs who had fallen in love.

While no one is able to give figures as to how many Tamil civilians or LTTE terrorists, LTTE killed – all these deaths are being conveniently credited to the Sri Lanka Armed Forces.

Sri Lanka Armed Forces are a professional army. They have followed the laws of war but during the height of hostilities no one can expect them to be flipping through law books when the enemy is dressed in civilian clothing, holding a gun and about to fire. Do people want the soldier to be a sitting duck to an enemy that doesn’t care too hoots about the laws of war & but happy to seek refuge as there are bunches of people unfairly placing soldiers on part with terrorists. LTTE are armed non-state actors.

They were given several chances to lay down arms & surrender. They refused & accepted their fate. No one can be shedding crocodile tears for a terrorist movement & demanding restorative justice to terrorists & retributive justice for a national army that was called in to protect the citizens of a nation.

If Canada or Ontario or anyone else is alleging war crimes or even genocide, there has to be dead people, the dead people must have names & addresses, there has to be relations, they must have some form of ID to verify if they were even born. Those that claim anyone is missing or dead should have filed complaint with the local police – where are these complaints, they also had chances to file names with the UNHRC investigation (OISL) – where are these 40,000 names? Then there was the Sri Lanka Missing Persons Commission – that list had only 20,000 names of which 5000 were soldiers and majority of missing were before the final phase of the conflict.

Canada recently banned 4 persons – 2 former Presidents and 2 soldiers. One soldier was not involved in the final phase of the conflict which leaves just 1 soldier accused of committing war crimes.

Canada by now should be wondering how the hell can 1 soldier kill 40,000 while both sides were fighting it out in a small strip of land near a lagoon. Just visualize the scene & see if it is even possible. Next imagine 40,000 or even 200,000 dead bodies – how the hell can the armed forces dig mass burial sites bury these people while rescuing some 300,000 Tamils? Even the US satellite images captured only 3 graves 2 of which were LTTE grave sites. UN Secretary General Ban Ki Moon & a foreign contingent arrived 3 days after the conflict ended & flew over the conflict zone – surely, he & others would have seen freshly dug graves & 3 days cannot produce skeletons, so there should have been visible corpses. Where were these supposed to be dead bodies?

Canada & Ontario if they have a semblance of common sense must realize that without dead bodies or even skeletons, no one leave alone a national army can be accused of war crimes or genocide.

By all means, commemorate a bogus genocide – no one can stop Canada from doing so, but eventually Canada will become a laughing stock in history and the history books will eventually declare that there was never 40,000 dead or killed, if there were by now we would know the names of at least 500 dead. We have been challenging all those who drum the genocide charges to come out with the list of names & details – but they are all mum & prefer to simply drum genocide and commemorate dead LTTE claiming these dead terrorists to be civilians.

There is certainly something amiss in the manner Sri Lanka is being hounded. The UNHRC resolutions themselves are legally questionable – from an initial resolution that congratulated Sri Lanka for defeating terrorists on 27 May 2009, since 2012 Sri Lanka has been facing successive resolutions based on a personally commissioned report that was never tabled in the UNHRC/UNSC or UNGA. UNHRC has failed to follow due process and there are many procedural lapses at play creating legally questionable precedents.

It is curious why the 6 reports of international terrorist experts who took up the UNHRC/OISL allegations & negated them by concluding that the Sri Lanka Armed Forces did not commit war crimes is being intentionally ignored.

No country can be accused of genocide without dead bodies, without skeletons, without names of the dead or even proof that they were even born! It is preposterous to be drumming war crimes or genocide allegations without these fundamental facts. If people had phones & were taking videos – why didn’t they video soldiers digging graves & dumping dead people inside?

LTTE dead without names = 10,435 (why did families not identify them)

This LTTE dead are not Civilian dead

This LTTE dead cannot be used by Canada/NGOs/LTTE Diaspora or quoted by UN/UNHRC.

If Canada, US, UK, EU, LTTE Diaspora are making wild allegations, they must back it up with evidence & ensure that the dead they present are not LTTE.

We would like to know if Canada’s leaders want to commemorate LTTE Terrorist dead and why?

Canadas Truth & Reconciliation Commission was advised not to use genocide” inspite of incriminating evidence against Canada of committing colonial & cultural genocide against Native Indians. In 2016 the Canadian Human Rights Tribunal accused Canada of racially discriminating 163,000 indigenous children. In 2019 Canada was declared guilty by the Canada’s National Inquiry into Missing & Murdered Indigenous women & girls. The Commission accused Canada of ONGOING genocide too. Before accusing other countries – Canada best get its house in order first & deal with the real genocide, Canada is accused of.