Sources closer to state-owned LITRO Gas denied the allegation levelled by Nagananda Kodithuwakku talking to a YouTube Channel that a great tender fraud was committed at the state-owned gas company, stating that his comments come in in a low-level attempt to accomplish political goals by fabricating a news from a false part of a popular story.

The sources on the condition of anonymity explained that an international tender was launched for the purchase of 280,000 metric tonnes of gas for LITRO for 2022 – 2023 and that its lowest bid, which was ended on 16/03/2022, was tendered to SIAM Gas for a shipping cost of US $ 96 per metric tonne, adding that this was already public record and there is no evidence to suggest that Kodithuwakku had researched and found anything new.

Kodithuwakku, who reveals only the date of the letter sent to SIAM on May 03, 2022 with the approval of the Cabinet, either does not know the entire contents of the letter or deliberately conceals the rest of the letter for his own purpose, the sources alleged.

Kodithuwakku conceals the facts that there is a shortage of gas in the current Sri Lankan market, LITRO had requested the Supplier (SIAM) to to provide 15,000 metric tonnes of gas for June considering the tender bid price being only US$ 96 per metric tonne as an emergency, as it takes some time to prepare standby letters of credit (SBLC) for the security of the Supplier, and the request was rejected outright by SIAM and urged on May 09, 2022 that a SBLC of US$ 30 million be issued via an international bank and that the gas could not be supplied until the issuance of such a LC, sources further disclosed to LNW.

They went on saying that Kodithuwakku has deliberately ignored the fact that LITRO is currently unable to provide a LC amounting to US$ 30 million due to the current crisis facing the country.

Replying to a letter from the state-owned gas company sent on May 03, 2022 requesting the supply of 15,000 metric tonnes of gas, SIAM responded on May 30, 2022 that such a consignment cannot be provided under this volatile situation and that they are able to provide 6,600 metric tonnes ten days after the issuance of a SBLC via a bank and that such an offer could be made for US$ 112 per metric tonne, not US$ 96.

The state treasury failed to provide them with SBLC due to the growing gas crisis locally and the inability of the lowest bidder SIAM to supply enough gas and worsening the situation, SIAM set out to offer conflicting prices. In the backdrop, the Sri Lanka LP gas market became a burning spot and the then LITRO Chairman Vijitha Herath sent a letter to the Finance Ministry on May 31, 2020 requesting financial assistance to obtain gas from OQ Trading in this emergency.

The Cabinet meeting held on 08/06/2022 accordingly concluded that SIAM would be the lowest bidder, but the government could not issue an SBLC in the event of a a recession and neither the bank nor the Treasury would be able to provide such facilities, urging the SIAM tender to be called off.

The Cabinet also directed that a new tender be issued expeditiously and that measures be taken to implement the procurement procedure on a more favourable basis considering the economic situation. It directed the relevant parties to obtain gas from OQ Trading, the second lowest bidder, for these urgent public needs and to meet those needs by working on favourable agreements on a more favourable credit basis amidst the economic challenges.

Therefore, Kodithuwakku ought to understand that it was an emergency purchase, not a preliminary tender, and that SIAM’s withdrawal was not due to commissions but because the GOSL was unable to issue SBLC on behalf of the company, the LITRO sources further pointed out.

They also alleged that Kodithuwakku is in an attempt to provoke unrest among the people by equating the gas price to that of LAUGFS, Rs. 6800, against the backdrop where current LITRO Chairman Muditha Peiris has pledged that the price of a domestic LITRO gas cylinder will not exceed Rs. 5,200. 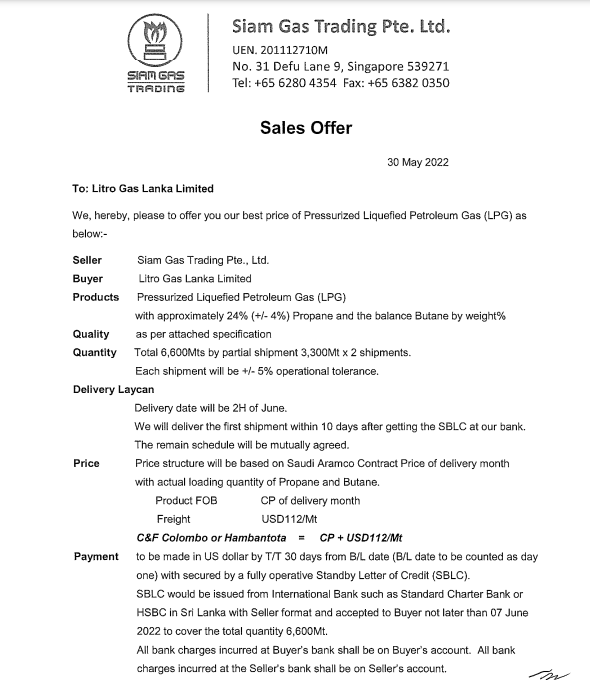 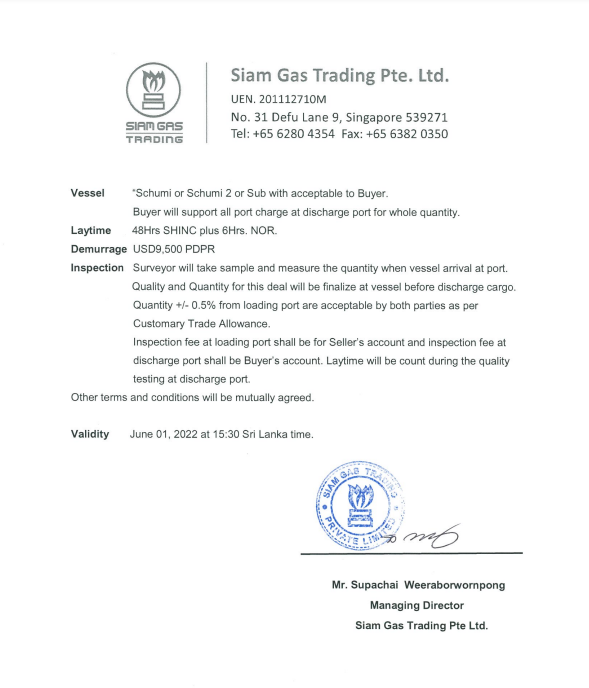 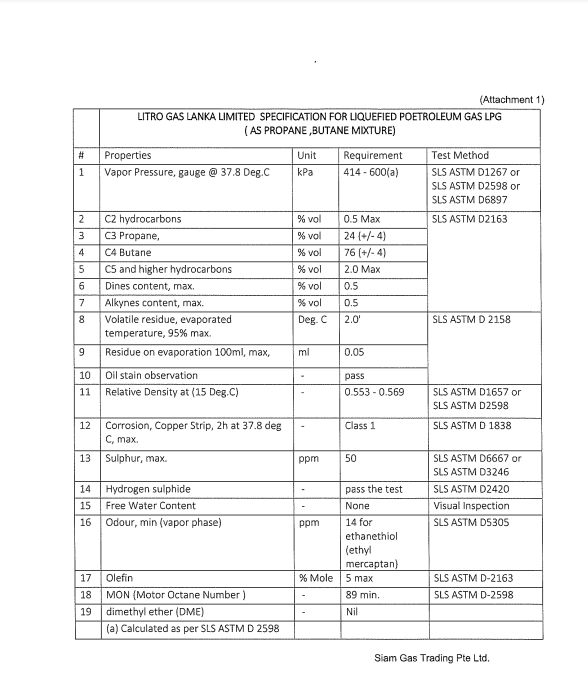 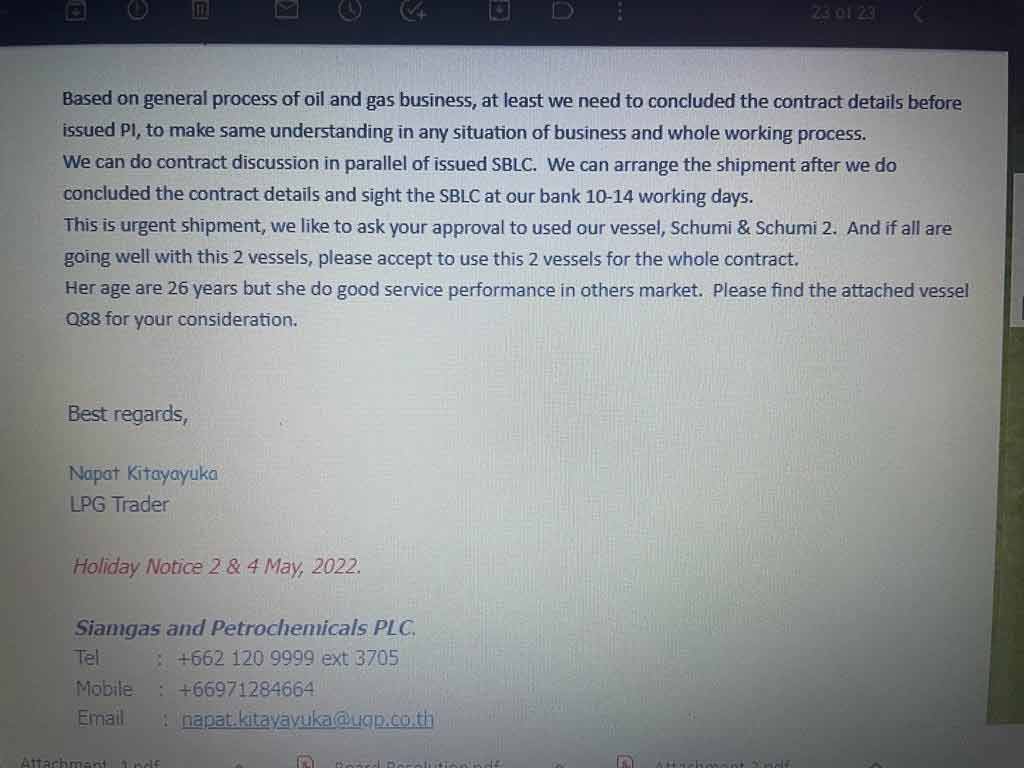 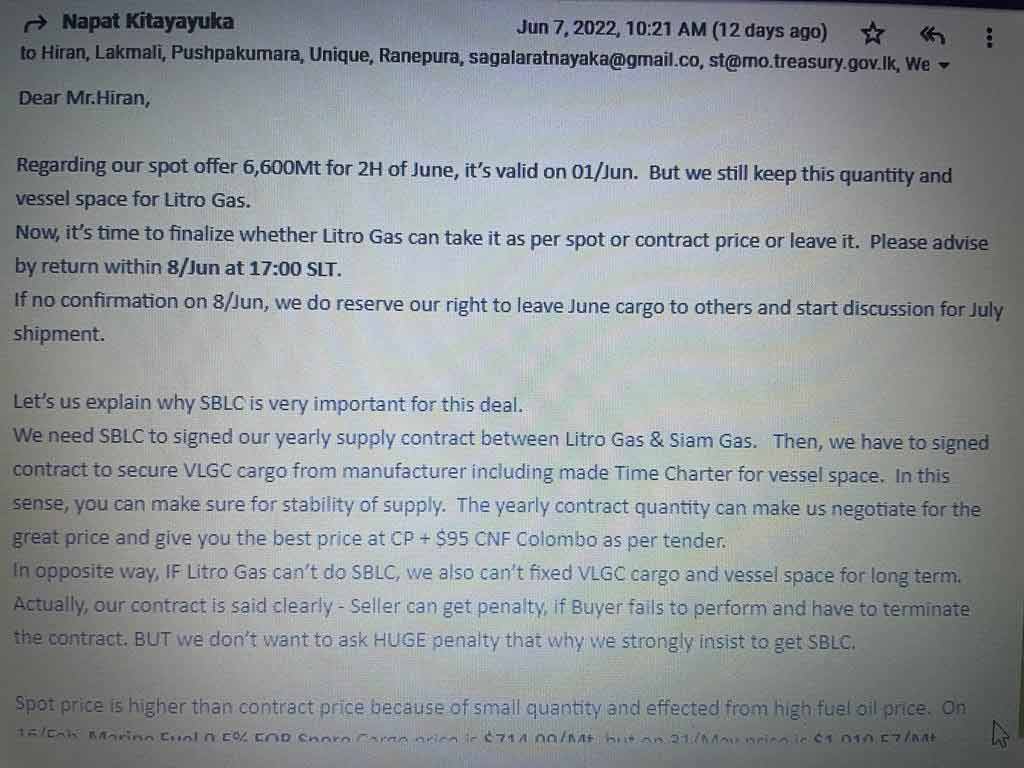 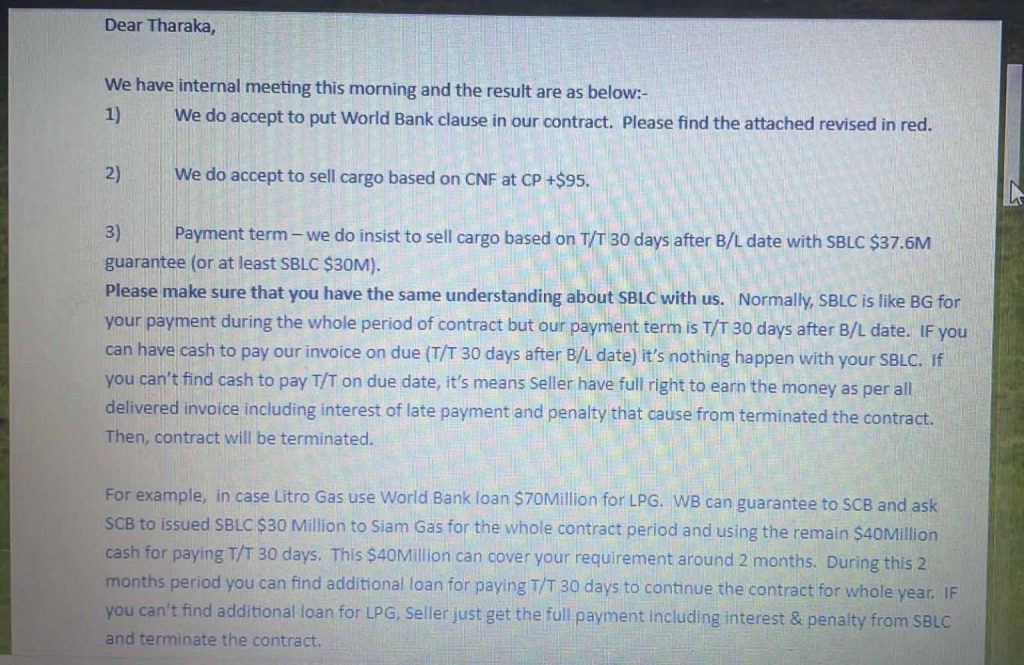