India’s opposition Congress party elected a former minister on Wednesday as its first president in 24 years not from the Gandhi dynasty, in an effort to reverse its electoral decline amid the rise of Prime Minister Narendra Modi and his Bharatiya Janata Party (BJP).

Mallikarjun Kharge, 80, was appointed by members over fellow politician Shashi Tharoor, a former under-secretary general for communications and public information at the United Nations, to replace Sonia Gandhi as president of the once-dominant party that won India’s independence from British rule 75 years ago.

He is also the first Dalit, people known as “untouchables” under India’s discriminatory caste system, to lead the party.

Congress governed India for decades after independence from Britain in 1947. The Gandhi family descended from the country’s first prime minister Jawaharlal Nehru.

Nehru’s daughter Indira Gandhi also went on to become prime minister. Her son Rajiv Gandhi succeeded her after her assassination in 1984. Rajiv Gandhi was killed by a Tamil suicide bomber in 1991.

Called on our new President-elect Mallikarjun @kharge to congratulate him & offer him my full co-operation. @incIndia has been strengthened by our contest. pic.twitter.com/fwfk41T93q

After back-to-back defeat to the BJP in 2014 and 2019, Rahul Gandhi – Rajiv’s son – resigned as party president and handed the presidency back to his Italian-born mother, Sonia Gandhi. She was first appointed to the role in 1998 before her son took over.

The party was reduced to just 53 seats in the 543-member lower house of parliament while the BJP won 303 seats in 2019 general elections.

Kharge, a veteran politician, was born five years before independence and is widely believed to have the backing of both Sonia and Rahul.

He now faces the mammoth challenge of winning the next national election, due in 2024, and three state elections next year.

That includes in his home state of Karnataka, where he personally has won 11 of the dozen elections he has contested during his long career in the Congress party. 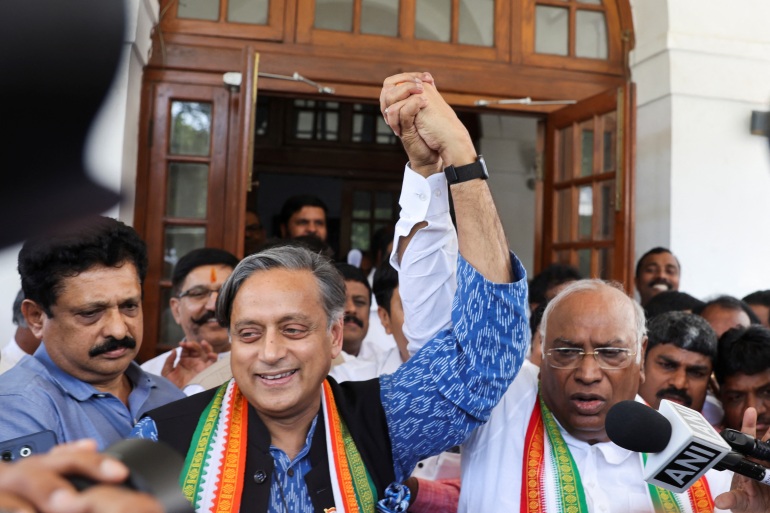 Shashi Tharoor, left, congratulated Kharge and said that being Congress president was a “great honour and a huge responsibility”. [Altaf Hussain/Reuters] ‘Ample leadership’

Tharoor congratulated Kharge and said that being Congress president was a “great honour amd a huge responsibility”, wishing Kharge “all success in the task”.

“Our president is a party colleague and senior who brings ample leadership and experience to the table,” he said in a statement posted on Twitter. “Under his guidance, I am confident that we can all collectively take the party to new heights.”

Neelanjan Sircar, a senior fellow at the Centre for Policy Research think-tank, said the change at the top was a significant step for the party.

“This symbolic change of the president is a very powerful moment for the Congress,” Sircar told Reuters news agency.

“Its desire to change will have to reflect in organisational change on the ground.”

Rahul Gandhi, speaking shortly before the party election result was announced, told reporters the new leader would call the shots.

“The Congress president is the supreme authority in the Congress party … Every member reports to them,” he said, according to Reuters.