Arriving as surprise Asia Cup champions, Sri Lanka had hoped to make an early statement against the African associate side in front of thousands of expectant supporters on a sun-bathed afternoon at Kardinia Park on Sunday.

Instead, it was Namibia soaking up their finest international win a year after storming into the Super 12s at the last T20 World Cup in the United Arab Emirates. 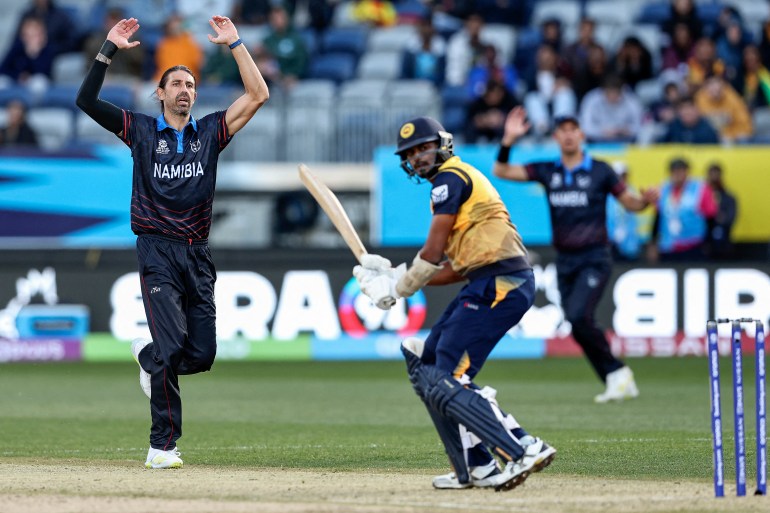 The left-handed Jan Frylinck and JJ Smit (31*) lifted Namibia to 163-7 with a 69-run seventh-wicket stand after being invited to bat first.

Sri Lanka were then bowled out for 108 in 19 overs, with David Wiese, Frylinck, Bernard Scholtz and Ben Shikongo taking two wickets each in the team’s first of three opening-round matches.

What a win for Namibia 🇳🇦and what start to the ICC Men’s T20 World Cup!! #T20WorldCup #SLvNAM

“It’s been a historic day for us. The opening day has been quite special but we want to kick on from here and qualify for the Super 12 stage. We understand the bigger picture as well,” Namibia skipper Gerhard Erasmus said after the stunning win.

Sri Lanka crashed to 21 for three and their chase was all but over when captain Dasun Shanaka fell for 29, his team still 76 runs short with three wickets in hand.

“Once we lose three wickets in the powerplay, we are usually out of the game,” said Shanaka. “The plans should be simple, we need not do anything special. We’ve got a good team, it’s about the process.”

Sri Lanka will have to pick themselves up without the services of left-arm fast bowler Dilshan Madushanka, who was ruled out of the tournament with a quadriceps muscle tear in a huge blow.

Things moves fast in T20: a few hours ago, as the first innings of this game was going on, Pat Cummins was asked about favourites for the tournament and put Sri Lanka in there after their Asia Cup win#T20WorldCup