Child malnutrition is soaring as inflation hits 94.9%, and many are missing school because parents do not have the cash to send them

Over the past few months, at a state school in the centre of Colombo, Sri Lanka, it has become common for children to faint in the middle of class. Students, coming from homes in the capital where parents can barely afford a meal a day, have been arriving at school quietly starving, as the country continues to grapple with the worst economic crisis since the great depression.

“Parents can’t afford the meat, eggs and milk that children need,” says Sandarenu Amarasiri, a teacher, adding that many were also missing school because financial hardship meant they could not afford transport, uniforms and shoes. This month, in an attempt to tackle the rampant hunger, the school began a programme giving basic lunch to students.

“Even we teachers try to give a meal to our students whenever we can,” she says. “But it is not easy with the prices of food.”

Since the beginning of the year, the once-thriving Sri Lanka has been brought to its knees. As a result of a series of disastrous economic decisions, compounded by corruption, the pandemic and the Ukraine war, the country found itself without any foreign currency reserves to import essential items, including food, fuel and medicines. Food shortages, blackouts and school closures have become the norm for the island’s 22 million people.

Many have warned that it is children bearing the brunt of the crisis. Food inflation has continued to rise, hitting a record 94.9% in September according to the Colombo Consumer Price Index, meaning parents have been unable to afford even basics such as rice and dal, while vegetables and meat have become unaffordable luxuries for many households. 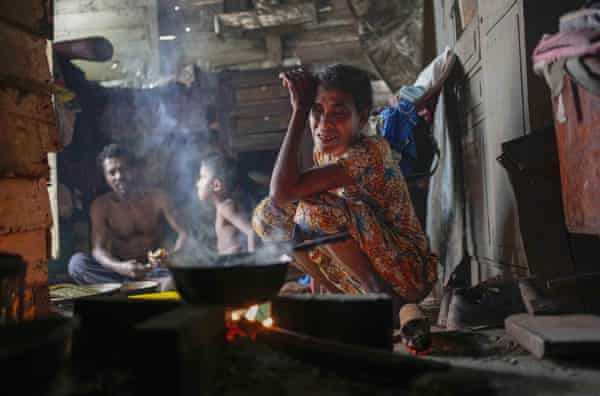 Meal time in a Colombo slum; vegetables and meat have become unaffordable luxuries for many. Photograph: Eranga Jayawardena/AP

The crippling crisis spawned a mass protest movement which led to the toppling of president Gotabaya Rajapaksa in July, who was blamed for financial mismanagement and rife corruption. However, the change in leadership, to the Rajapaksa ally Ranil Wickremesinghe, has done little to ease Sri Lanka’s economic woes, with experts warning it could be years before the country is back on its feet, despite a $2.9bn (£2.5bn) loan from the International Monetary Fund tentatively agreed last month.‘The family took over’: how a feuding ruling dynasty drove Sri Lanka to ruin

With 90% of people relying on state handouts, child malnutrition has soard across Sri Lanka. According to Save the Children, two-thirds of families are now struggling to feed themselves, while Unicef’s regional director for south Asia, George Laryea-Adjei, says that “children are going to bed hungry, unsure of where their next meal will come from”.

In Mahavita village in Yakkala, about 20 miles from Colombo, mothers speak despairingly of not being able to feed children. Wasanthi Jennifer, 43, a single mother to a 15-year-old son who earns a tiny income from a shop run out of her house, recently did not have enough money even for dal so foraged kohila leaves, a Sri Lankan herb, from the roadside to give her son lunch.

“It broke my heart to watch my son eat just kohila and rice,” says Jennifer. “He is a good boy. He eats whatever we have at home without complaining.” Sometimes my daughter feels faint and has bad stomach aches. But I am doing the best I can

Jennifer says they could no longer afford milk for tea, and she regularly went without breakfast. “I have to live by the day,” she says. She could also not afford another much-needed school uniform.

“As soon as he comes back, we wash it so that he can wear it the next day,” she says. “Last week, he didn’t go to school because his shoes were torn. I had to take a loan from a villager to buy him a new pair of shoes.”

In Sri Lanka’s poverty-stricken regions in the north, parents have started leaving their children in care homes as they can no longer feed them. An official working in child protection in the northern province, who was not authorised to speak to the media, confirmed to the Guardian that “more and more parents are leaving their children in children’s homes because of financial issues … I have personally met parents who say that they can’t provide for their children any more.” 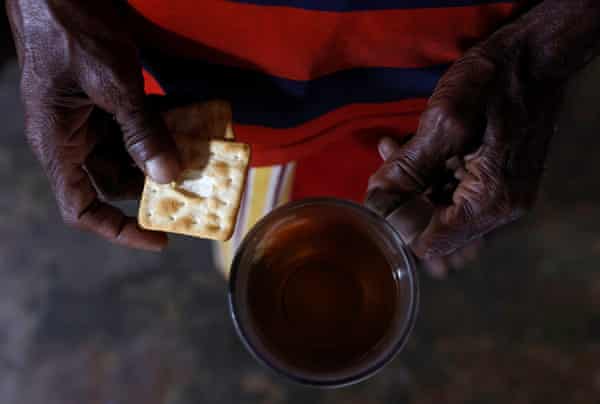 WA Susantha, 45, who used to have a fruit stall, displays the only food he has for the day. ‘With the drawn-out lockdowns and now this economic crisis I don’t have money to restart my stall.’ Photograph: Kim Kyung-Hoon/Reuters

The 65m rupees in funding that the northern province child services used to receive has been cut, meaning that the authorities don’t have the means to step in and help families when finances are causing the problem. According to figures from the Department of Probation and Child Care Services, in the first six months of this year, 246 children in the northern region were sent to care homes, almost double the 146 children put into state care for the whole of 2021, a rise which local officials directly attributed to the economic crisis.

Experts say the long-term implications on child development could be severe, and damage Sri Lanka’s much-lauded literacy rate of 92%, which is the best in the region. Ishanka Maduwanthi, 34, another mother living in Yakkala near Colombo, says she could no longer afford the school fees to send her five-year-old son to school, and her nine-year-old daughter was also forced to regularly miss school when they couldn’t afford the bus fare or food for her. Her husband used to earn money as a daily wage earner but now all the work has dried up in the crisis.

Fish, milk and chicken have become distant memories, and now the family of four live off only rice, lentils and sambol, a simple dish made from grated coconut. If she can, Maduwanthi buys eggs twice a month in a effort to provide some protein to her children, but even that is a push for the family, and she recently had to rely on a donation of rice as she did not have the money to buy it herself.

“Sometimes my daughter feels faint and has bad stomach aches,” she says. “But I am doing the best I can.”