Ranil Wickremesinghe, 73, prior to taking office on July 20, declared a state of emergency across the South Asian state 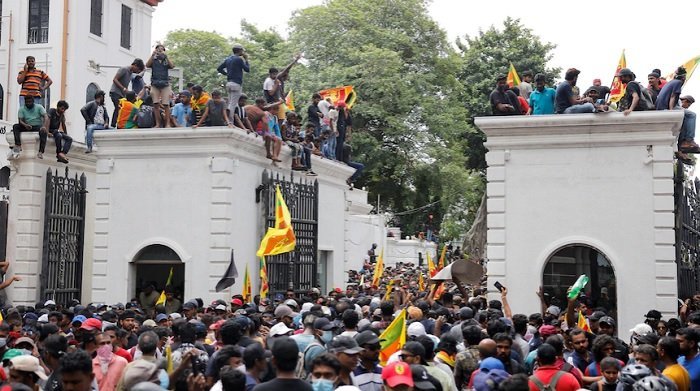 Sri Lankans storm the residence of the president and the Prime Minister (Photo credit : Reuters via abc news)

Sri Lanka, an island-nation of 22 million people, has been the center of political and economic turmoil since the United National Party government defaulted on $51 billion in foreign debt during May.

For months the country has experienced severe shortages of fuel, food and other commodities amid an inflationary spiral.

Motorists have lined up for blocks to get fuel and cooking oil. A failed agricultural fertilizer policy has been cited as the cause behind the decline in agricultural production.

The shortages of fuel have hampered the production and marketing of agricultural products such as tea which is exported from Sri Lanka. Due to the lack of fuel, trucks which transport these agricultural commodities for internal marketing and export have been drastically reduced.

Workers and small business operators have lined up sometimes for two days in order to purchase limited amounts of fuel. On June 28, the now ousted government of President Rajapaksa placed a ban on the distribution and purchase of fuel for reasons considered non-essential. However, people in the urban areas continued to queue for extended periods of time. Some were eventually given a token promising to fulfill their needs for gasoline and cooking oil at some future date.

The shortages of food have caused many Sri Lankans to reduce their diets to consuming only one meal per day. Schools have been shut down due to transportation issues. As a result of the high rate of inflation, the value of the national currency, the rupee, has continued to slide downwards. This set of circumstances has drained the country’s foreign reserves to just over $US1 billion.

Earlier in July, thousands of angry protesters stormed the residences of President Gotabaya Rajapaksa, taking over control of the palace while helping themselves to food, luxurious furniture and a swimming pool. Rajapaksa, a member of a powerful political family in Sri Lanka, fled to Singapore where he later resigned the presidency with an e-mail to the parliament.

On July 20, through a parliamentary secret ballot, Wickremesinghe was elected as the new president pledging to work with other political forces to improve the economic plight of the people. Wickremesinghe had served on five other occasions in the position of prime minister of Sri Lanka.

Several hundred demonstrators soon gathered in the commercial center of Colombo to express their dismay towards the actions of the parliament. Some of the protesters demanded the immediate resignation of Wickremesinghe who has for many years maintained political ties with the Rajapaksa family.

In a report on the installation of Wickremesinghe published by the Associated Press, one activist was quoted as saying: “’We are very sad, very disappointed with the 225 parliament members who we elected to speak for us, which they have not done,’ said Visaka Jayawware, a performance artist in the crowd. ‘We will keep fighting for the people of Sri Lanka. We have to ask for a general election.’… ‘The struggle will continue until our demands are met. Wickremesinghe ‘doesn’t have a mandate to rule the country,’ said Nemel Jayaweera, a human resources professional. ‘We will oppose him.’” (https://apnews.com/article/elections-asia-presidential-race-and-ethnicity-9f43a592bd31eea614a25c35438d920b)

The current social and economic conditions in Sri Lanka provide a strong indication of the extent of the world capitalist crisis. As a developing post-colonial state having gained its independence from British colonialism in 1948 after 133 (1815-1948) years of imperialist domination, Sri Lanka has struggled to overcome the divisions based upon ethnicity and the class structures inherited from Britain.

Several states throughout Africa and Asia are facing similar challenges in their attempts to emerge from the COVID-19 pandemic and its consequent economic distresses. Even the leading industrialized countries of Western Europe and North America are undergoing sharp rises in inflation and the threat of yet another recession.

In the capitalist states of Britain and the U.S., the administrations of President Joe Biden and outgoing Prime Minister Boris Johnson have failed to win a favorable opinion rating by the majority of the electorate in these countries. Divisions within the legislative and judicial branches of government in the U.S. has rendered the Democratic Party program of limited social reforms null-and-void.

Consequently, it should not be surprising to witness the unraveling of administrations in developing countries. These economic factors combined with the threat of a protracted war between the People’s Republic of China and the Russian Federation on one side against Washington and its NATO allies on the other, has resulted in the escalation of international uncertainty and insecurity.

Sri Lanka has experienced tumultuous conflicts throughout its history. Formerly called Ceylon, the British colonialists deliberately created divisions between the majority Sinhalese and the minority Tamil population which largely resides in the north and east of the island. Tamils, who are mainly Hindu, were more exposed in the colonial era to Christianity and missionary education. These colonial policies shaped the social class structure of Sri Lanka after independence in 1948.

By July 1983, these simmering tensions exploded leading to a civil war which continued until 2009 when the Sri Lankan army crushed the bases of the Liberation Tigers of Tamil Eelam (LTTE), a militant organization seeking the creation of Tamil state in the northeastern region of the island. As a result of the civil war, hundreds of thousands of Tamils fled Sri Lanka taking up residence in other regional and faraway countries.

The Role of the International Monetary Fund

Wickremesinghe in his inaugural address in the Sri Lankan parliament spoke of his desires to negotiate with the IMF over a “bailout” package which could ease the severe economic problems in the country. However, the history of the IMF in such circumstances where developing states are undergoing a major economic recession or depression, has brought about the implementation of austerity measures which adversely impact the workers, poor, women and youth disproportionately.

Many post-colonial states at the time of independence quite often continued the cash crop economic production and trade models developed under imperialist rule. Therefore, the major consuming states in the West which purchase their commodities in hard currencies, can wield tremendous sway over the domestic policies of a given country.

The British Broadcasting Corporation (BBC) in a June 28 article emphasized: “Last week, an International Monetary Fund team arrived in Sri Lanka for talks over a $3bn (£2.4bn) bailout deal. The government is also seeking assistance from India and China to import essential items. New Prime Minister Ranil Wickremesinghe (now president) said earlier this month the country needed at least $5bn over the next six months to pay for essential goods such as food, fuel and fertilizer. In recent weeks, ministers also called on farmers to grow more rice and gave government officials an extra day off a week to grow food, amid fears of shortages.” (https://www.bbc.com/news/business-61961821)

Sri Lanka’s major exports include manufactured garments, tea and other agricultural commodities. The country also relies heavily on tourism which has been down since the pandemic beginning during the early months of 2020.

One source which monitors the Sri Lankan economy says: “The latest available country-specific data shows that about two-thirds (66.3%) of products exported from Sri Lanka were bought by importers in: United States of America (24.8% of the global total), United Kingdom (8.9%), India (6.1%), Germany (5.7%), Italy (4.5%), Belgium (2.93%), Netherlands (2.87%), China (2.4%), Canada (2.11%), Turkey (2.1%), United Arab Emirates (2%) and Japan (1.9%)…. Another key indicator of a country’s economic performance is its unemployment rate. Sri Lanka’s unemployment rate averaged 5.3% for 2021 down from an average 5.5% in 2020, according to metrics from the International Monetary Fund. Sri Lanka’s administrative capital city is Sri Jayawardenepura Kotte, while the island country’s commercial capital is Colombo.” (https://www.worldstopexports.com/sri-lankas-top-10-exports/)

Whatever structural adjustment plans that are imposed on Sri Lanka by the IMF will not satisfy the needs of the majority of working people, youth and national minorities. The inevitable failure of this approach to the escalating world crisis within the capitalist states will be replicated in other geopolitical regions of the world.

The opposition parties in Sri Lanka are divided over which course to take in the crisis. Several left-oriented parties have in the recent period worked in alliances which have won a small number of seats in parliament. Although the country during the 1950s and 1960s played a significant role in the non-aligned and socialist-oriented movements, in recent years Sri Lanka has been dominated by neo-liberal political interests as represented by the Rajapaksa and Wickremesinghe UNP administrations, who have maintained close ties with the military.

Facing a similar crisis, within the Southern African state of Zambia, a major producer of copper, the government defaulted in late 2020 on its international obligations to the global financial interests. The recent change of government inside the country has not impacted the need to seek relief from the IMF. (https://www.cnbc.com/2020/11/23/zambia-becomes-africas-first-coronavirus-era-default-what-happens-now.html)

People throughout the world should pay special attention to the situation in Sri Lanka since its outcome will portend much for both industrialized and developing countries. The deepening contradictions within the capitalist system are resulting in horrendous conditions for working and oppressed peoples globally. Consequently, an international movement is required to respond based upon the interests of the majority of people throughout the world.
__

To share information or for submission, send e-mail to [email protected]