Protesters in Sri Lanka defied tear gas, water cannon and a state of emergency to storm the prime minister’s office after the country’s embattled president fled overseas, with the crowd demanding both men step down in the face of an economic crisis.

In a televised statement on Wednesday, Prime Minister Ranil Wickremesinghe said he had instructed the military and police to do “what is necessary to restore order”.

But armed security personnel stood by on the grounds of his office as protesters, some holding national flags, milled and took pictures.

Other demonstrators at one point broke into state television studios, as the country’s months-long political and economic crisis appeared to be moving towards a climax.

President Gotabaya Rajapaksa, 73, promised at the weekend to resign on Wednesday after escaping his own official residence in Colombo just before tens of thousands of protesters overran it.

He flew to the neighbouring Maldives early on Wednesday. As president, he enjoys immunity from arrest, and he is believed to have wanted to go abroad before stepping down to avoid the possibility of being detained.

But midnight passed with no announcement he had stepped down. 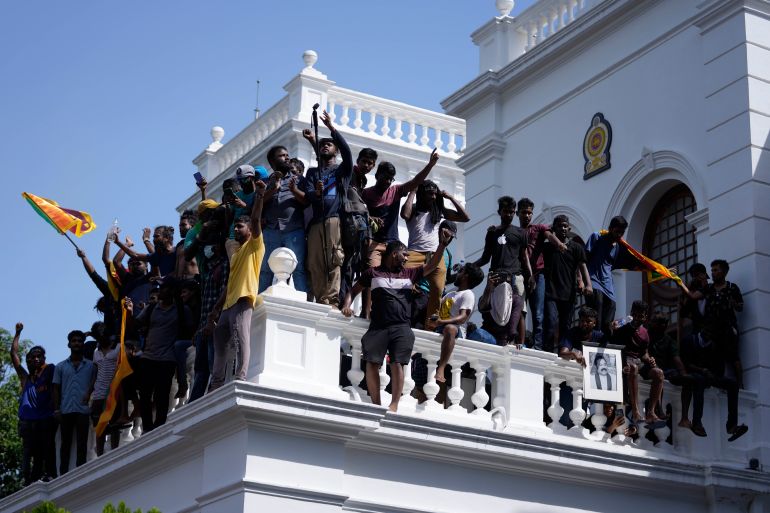 In his absence, he named as acting president Prime Minister Ranil Wickremesinghe, whose own office was soon mobbed by thousands of demonstrators demanding both officeholders should go.

Tear gas and water cannon fired by police and the declaration of both a nationwide state of emergency and a curfew failed to disperse them and the crowd poured into the building.

One protester was killed due to suffocation from tear gas, police said.

Helicopters hovered over protesters in Colombo on Wednesday, in what a protest leader called an “attempt to intimidate”.

“State of emergency wasn’t imposed to protect people but to oppress the people. We urge everybody to come and join the protest at Galle Face,” Madhubhashini said, referring to a main protest site in the city.

Wickremesinghe, also 73, would automatically become acting president if Rajapaksa steps down but has himself announced his willingness to resign if consensus is reached on forming a unity government.

The presidential succession process could take between three days – the minimum time needed for parliament to elect a member of Parliament to serve out Rajapaksa’s term, which ends in November 2024 – and a maximum of 30 days allowed under the statute. 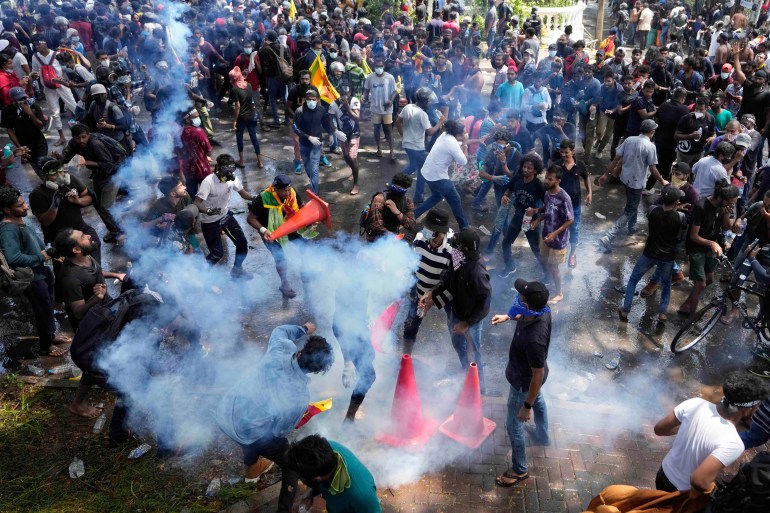 Rajapaksa is accused of mismanaging the economy to a point where the country ran out of foreign exchange to finance even the most essential imports, leading to severe hardships for its 22 million people.

Sri Lanka defaulted on its $51bn foreign debt in April and is in talks with the International Monetary Fund for a possible bailout.

The island has nearly exhausted its already scarce supplies of petrol. The government has ordered the closure of non-essential offices and schools to reduce commuting and save fuel.

The departure of Rajapaksa, once known as “The Terminator”, had been stymied for more than 24 hours in a humiliating standoff with immigration personnel in Colombo.

He had wanted to fly to Dubai on a commercial flight, but staff at Bandaranaike International withdrew from VIP services and insisted that all passengers had to go through public counters.

His youngest brother Basil, who resigned in April as finance minister, missed his own Emirates flight to Dubai on Tuesday after a tense standoff of his own with airport staff.

Meanwhile, some Sri Lankans and Maldivians have criticised the government in the Maldives for agreeing to host Rajapaksa.

A leader of the opposition in the Maldives, Dunya Maumoon, has expressed concern about her country providing a safe passage for Rajapaksa.

“I think Mr Rajapaksa should be in Sri Lanka to face the consequences of his actions,” she said.

“The people of Sri Lanka and the Maldives will be very concerned. One cannot create a situation that led to the collapse of a country and then flee to evade justice,” said Maumoon, who is currently the president of the women’s wing of the recently formed Maldives National Party.