Allegations that China is overseeing the forced labour of Uighurs and other ethnic minorities in Xinjiang are credible and persuasive, a UN expert on slavery has found.

In a report to the UN General Assembly, Tomoya Obokata, the special rapporteur on contemporary forms of slavery, said it was “reasonable to conclude” that forced labour was taking place in China’s far-western region, where activists say more than one million ethnic minority Muslims have been detained in internment camps.

Obokata said in that report, circulated on Wednesday, that evidence of forced labour existed within the region’s system of “vocational skills education and training” centres and a poverty alleviation programme that involves transferring surplus rural labourers to other work.

While such programmes created employment and income for ethnic minorities as claimed by the government, evidence pointed to the work in many cases being of an “involuntary nature”, the rapporteur said.

“Further, given the nature and extent of powers exercised over workers during forced labour, including excessive surveillance, abusive living and working conditions, restriction of movement through internment, threats, physical and/or sexual violence, and other inhumane or degrading treament, some instances may amount to enslavement as a crime against humanity, meriting a further independent analysis,” Obokata said.

Obokata said he reached his conclusion “based on an independent assessment of available information”, including victims’ testimony, academic research and government accounts.

The rapporteur’s findings come after the United States, Canada, the European Union and the United Kingdom have in recent years imposed sanctions on officials and businesses linked to alleged human rights violations in the region.

Fatimah Abdulghafur, a Uighur activist based in Sydney, Australia, said the rapporteur’s findings were long overdue.

“The UN report cannot change or stop the hellish situation of Uighurs in Chinese-occupied East Turkestan. But this doesn’t mean that the report is of no use,” Abdulghafur told Al Jazeera, referring to Xinjiang by the name preferred by many Uighurs.

“The UN report is an official record of documenting the Uighur/East Turkestan crisis. It’s a good start. On the other hand, the occupier China will do everything in their power to deny any atrocities they have been committing in East Turkestan.” 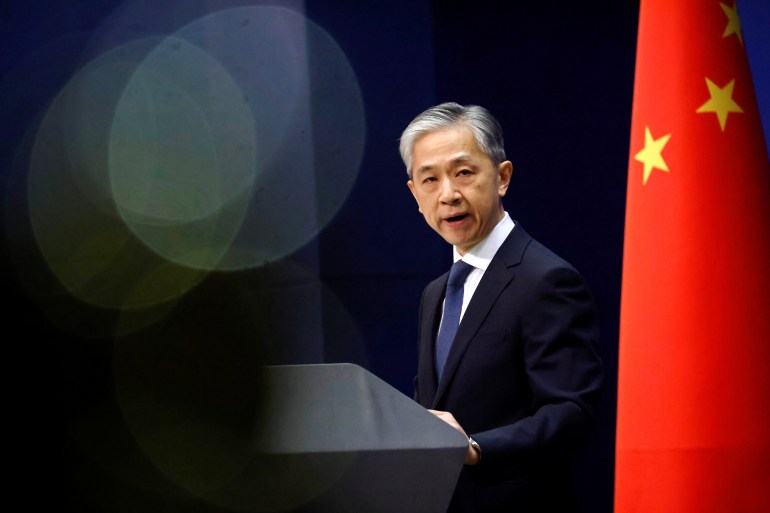 China has denied allegations of human rights abuses, including genocide, and has credited its “vocational education and training centres” with reducing violent extremism and poverty. On Wednesday, Chinese Foreign Ministry
Spokesperson Wang Wenbin accused Obokata of believing disinformation, abusing his authority and serving as a “political tool for anti-China forces”.

“The Chinese government follows a people-centred development philosophy and attaches great importance to protecting the rights and interests of workers,” Wang said during a regular press conference.

“We protect the equal right of workers from all ethnic groups to seek employment, to participate in economic and social life, and to share the dividends of socioeconomic progress. Some forces manipulate Xinjiang-related issues and fabricated the disinformation on ‘forced labor’ in Xinjiang.”

In his report, Obokata also highlighted the persistence of domestic servitude in the Gulf countries, Brazil and Colombia, and traditional enslavement in Mauritania, Mali and Niger.

He said forced or child marriage continued to be a concern in numerous countries, including Afghanistan, Somalia, the Democratic Republic of Congo, Cambodia, India, Kazakhstan, Sri Lanka, Vietnam, Bolivia, Colombia and Honduras.