written by Top Stories Fri Jul 22, 4:36 am Source
Dinesh Gunawardena took the oath as Sri Lanka's new prime minister on Friday, a day after six-time prime minister Ranil Wickremesinghe was sworn in as the country's new president.Sri Lankan security forces raided a protest camp occupying government grounds in the main city of Colombo early on Friday and cleared out a section of it, a sign that the country's new president was cracking down a day after his swearing-in.

Media footage showed soldiers in riot gear and armed with assault rifles tearing down the camp, set up in April by protesters enraged with the country's economic collapse that has caused severe shortages of fuel, food and medicines.

"A joint operation involving the military, police and police special forces was launched in the early hours to recover the presidential secretariat from the protesters as they have no legal right to hold it," police spokesperson Nalin Thalduwa told Reuters.

"Nine people, including two injured, have been arrested."

Why are people protesting?

Protesters had feared a crackdown was imminent under Mr Wickremesinghe, who was seen as an ally of his ousted predecessor, Gotabaya Rajapaksa.

Protest organisers said hundreds of security personnel surrounded the "Gota Go Gama" protest camp, mockingly named after Mr Rajapaksa, after midnight and then took apart a section of it. 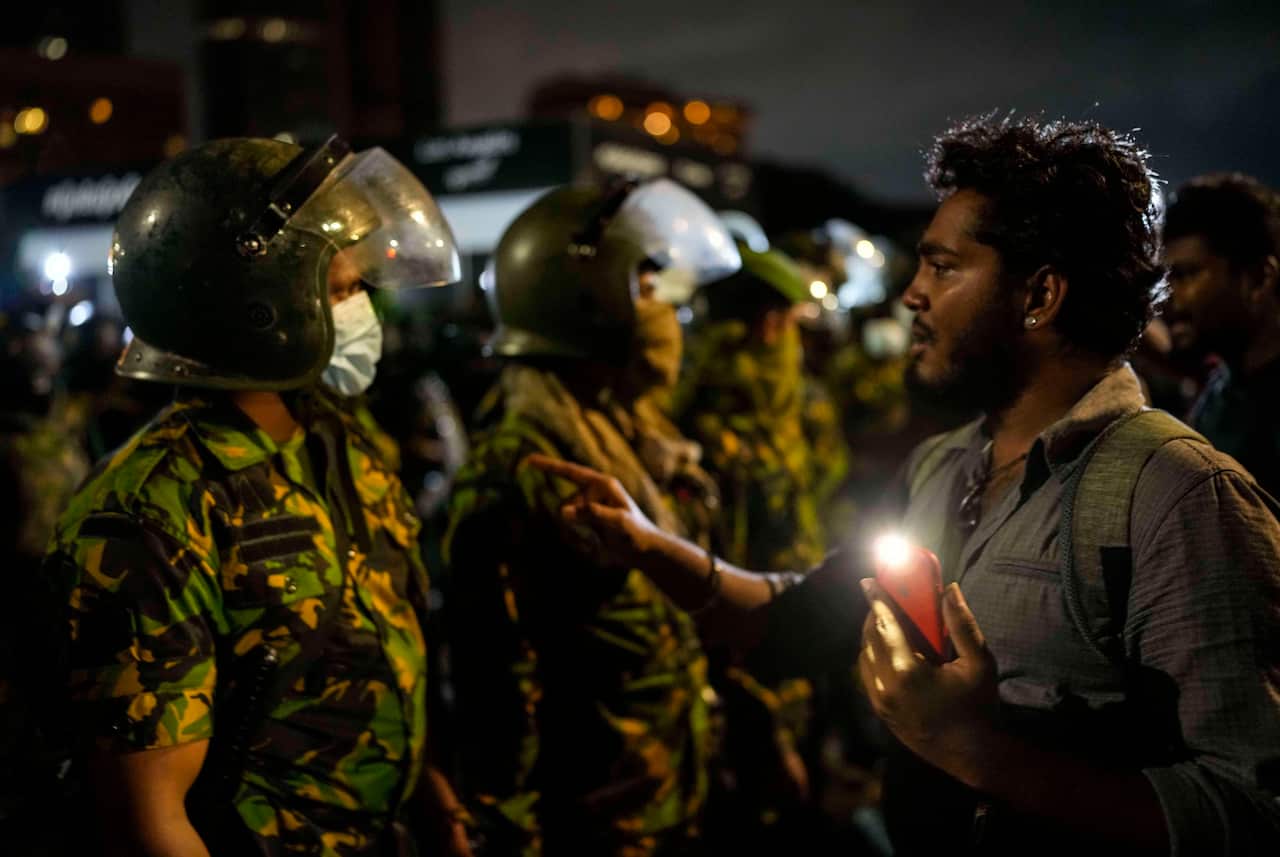 Police say nine people were arrested during the crackdown on the protest camp in Colombo. Source: AAP / AP

As daylight broke, dozens of troops marched through the area and rows of protest tents that stood on both sides of the main road that passes in front of the office of the president were completely cleared out.
Dozens of protesters stood by, looking at newly set up barricades and security personnel.

At least 50 protesters were injured, the organisers said, including some journalists who were beaten by security forces. Hospital sources said two were hospitalised.

"They beat us really cruelly," said Buddhika Abeyrathne, 34, a protester who witnessed the raid but did not appear injured himself. "Mr Wickremesinghe doesn’t know what democracy is."

Sri Lanka is under a state of emergency since Monday. Previous emergency regulations have been used to give powers to the military to detain and arrest protesters and curtail the right to protest. 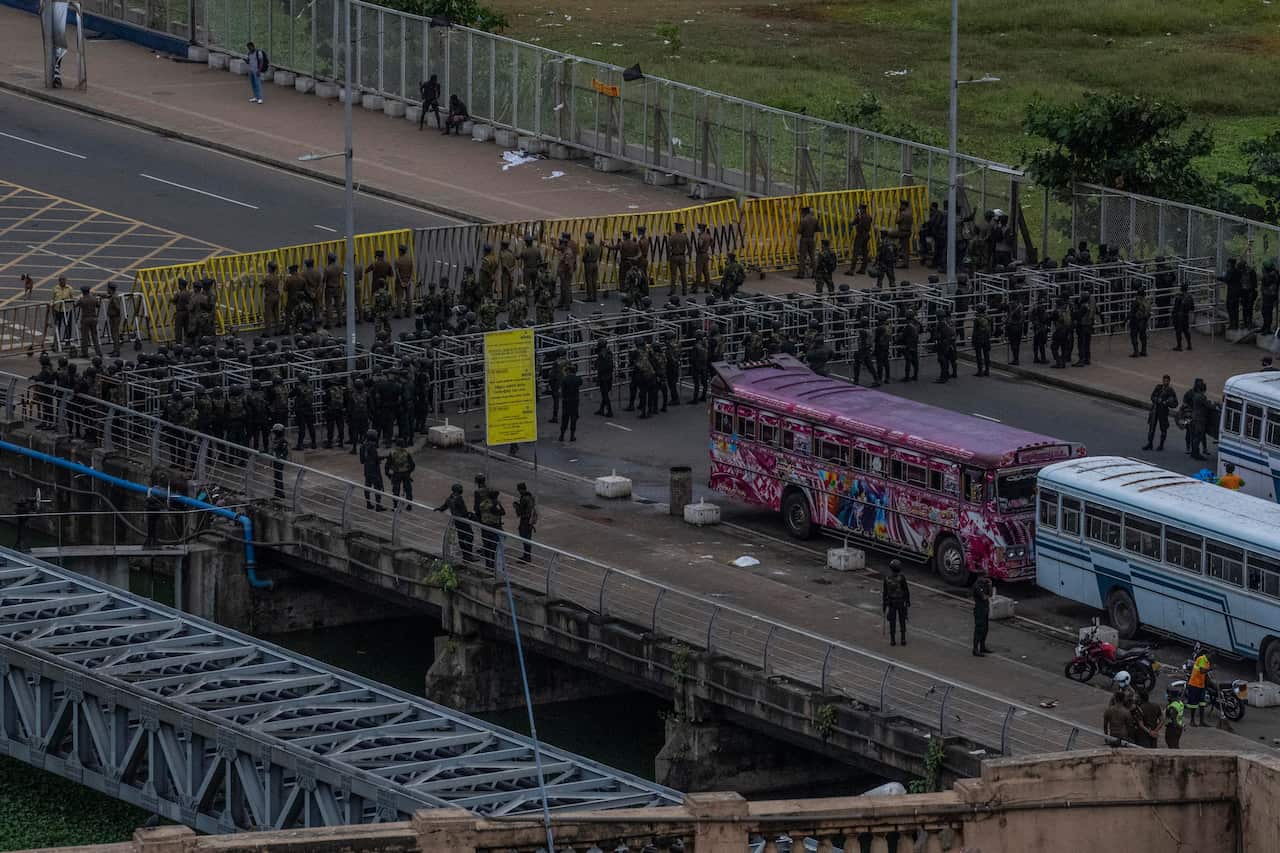 Army soldiers stand guard after removing the protesters and their tents from the site of a protest camp outside the Presidential Secretariat in Colombo, Sri Lanka, on Friday, 22 July 2022. Source: AAP / AP

Mr Wickremesinghe, the former prime minister, was sworn into office on Thursday after winning a parliamentary vote this week, following the resignation of Mr Rajapaksa who fled to Singapore in the wake of massive public protests triggered by the country's worst economic crisis in seven decades.

Who could be the next prime minister?

The president is expected to appoint Mr Rajapaksa's ally Dinesh Gunewardena as prime minister along with a new cabinet later on Friday.

Security forces appeared to have taken control of the entire secretariat, with many more personnel visible inside the building perimeter that was earlier this month seized by protesters, along with the president and prime minister's official residences.The residences were later handed back to government authorities. Protest organiser Chameera Dedduwage told Reuters they had planned to hand over the presidential secretariat to government authorities on Friday afternoon. Police said they had no information on that.

US and British diplomats expressed concern. "We urge restraint by authorities and immediate access to medical attention for those injured," US Ambassador to Sri Lanka, Julie Chung, said on Twitter.

"The excessive force and the violence used to remove protesters is a marked difference from what Sri Lanka needs right now, especially when the protesters had already said they will vacate the premises," said Bhavani Fonseka, a senior researcher at Colombo-based think tank Center for Policy Alternatives. The Bar Association of Sri Lanka said the crackdown could destabilise the country, which is in need of foreign aid and a bailout from the International Monetary Fund.

"The use of the armed forces to suppress civilian protests on the very first day in office of the new president is despicable and will have serious consequences on our country’s social, economic and political stability," the collective of lawyers said in a statement.