written by MIAP Tue Nov 01, 11:49 am Source
Conservationists have welcomed an announcement by MSC, the world’s biggest container shipping line, that its ships will detour around a key feeding and nursing ground for blue whales off Sri Lanka’s southern coast.Ship strikes are a leading cause of death for the large whales that frequent the waters around Sri Lanka, which also include to a lesser extent sperm whales and Bryde’s whales.Marine conservationist Asha de Vos says other shipping lines should follow MSC’s lead, and has also called on the Sri Lankan government to propose making the shipping lane change permanent.She also says whale deaths from ship strikes may be up to 10 times higher than recorded, given that current and wind conditions are more likely to wash carcasses out to sea than toward shore, making them less likely to be detected.

COLOMBO — When some of the biggest machines ever made meet the largest animals to ever live, it often doesn’t work out well for the latter. In March 2012, a container ship sailed into the port of Colombo, Sri Lanka, with the body of a blue whale snagged across its bow. Less than two weeks later, another blue whale carcass was found floating off the country’s southern coast, its tail almost severed in what could only have been a ship strike.

The waters off southern Sri Lanka are a rich feeding and nursing area for blue whales (Balaenoptera musculus). But they’re also an important shipping lane, which makes them a “collision hotspot,” according to Ranil Nanayakkara from the conservation outfit Biodiversity Education and Research (BEAR).

That could be about to change, however, thanks to an announcement in September by the Mediterranean Shipping Company, the world’s biggest container carrier, that it has begun ordering its ships to skirt the area and slow down. The new course runs 15 nautical miles (28 kilometers) further south, and the vessels will slow to a speed of 10 knots (18.5 km/h), MSC said in a statement. 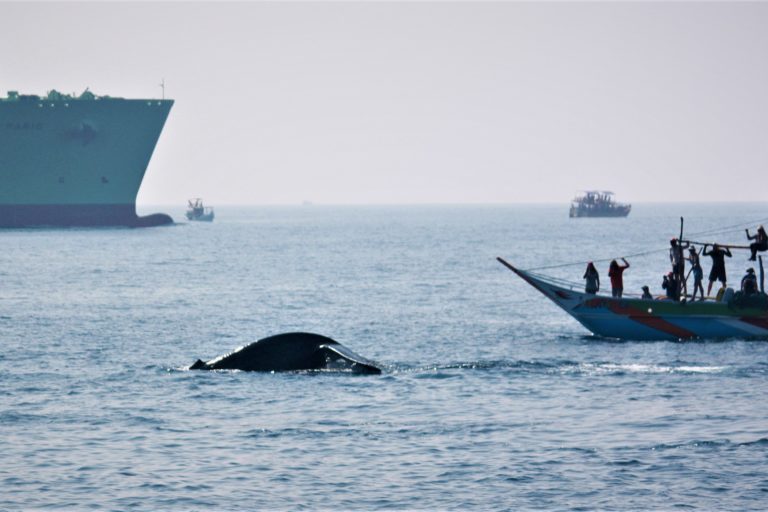 A whale swims close to a whale-watching boat. Image courtesy of Ranil Nanayakkara.

The figure of 15 nautical miles is what experts have previously recommended. A 2015 study showed that this detour would slash the risk of blue whales being hit by ships by 95%.

That would be a huge win for the species, according to Nanayakkara, whose own study in 2017 showed that nearly half of all large whale deaths recorded in Sri Lankan water were from ship strikes. The study documented 14 such deaths between 2010 and 2014, after investigating more than 30 whale carcasses that washed up on beaches. These consisted of nine blue whales, two sperm whales (Physeter macrocephalus), one Bryde’s whale (Balaenoptera brydei), one Cuvier’s beaked whale (Ziphius cavirostris) and two unidentified baleen whales.

All 14 were assessed as victims of collision based on external or internal injuries, Nanayakkara told Mongabay. 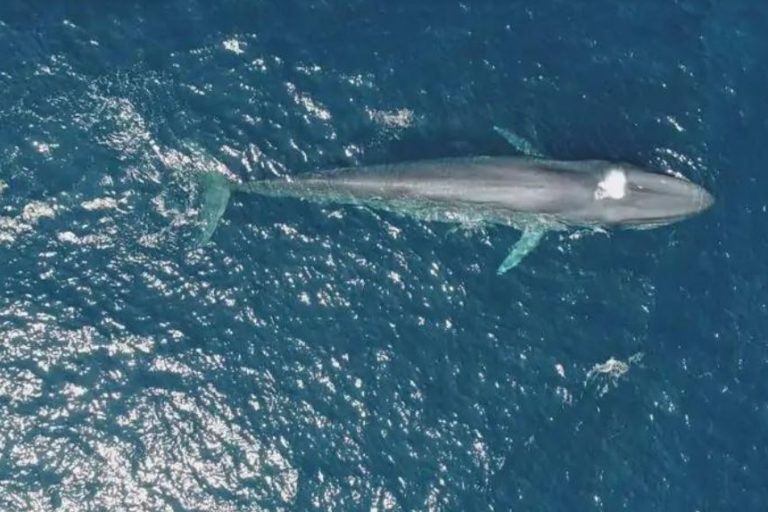 Asha de Vos, a marine biologist with the conservation and research outfit Oceanswell, who has studied the blue whales off southern Sri Lanka for more than a decade, has long campaigned for getting the shipping lane shifted permanently. She said MSC’s announcement marks a step in the right direction.

“We welcome the voluntary shifting of the MSC shipping [lane] but want the government to make the adjustment permanently,” de Vos told Mongabay, adding that other shipping lines should also follow MSC’s lead.

De Vos has also raised the issue with the International Whaling Commission. “In 2016, the IWC Scientific Committee agreed that the combined results of studies would support a proposal to the International Maritime Organization to move the shipping lanes should Sri Lanka wish to do so, but the Sri Lankan Government should initiate the process,” she said.

The IMO confirmed separately that Sri Lanka has not yet made a formal proposal to reroute the sea lane.

For the Sri Lankan government, currently mired in the worst economic crisis in the country’s history, keeping the sea lane where it is, about 5 nautical miles (9 km) off the whale-watching port of Mirissa, is an economic decision. 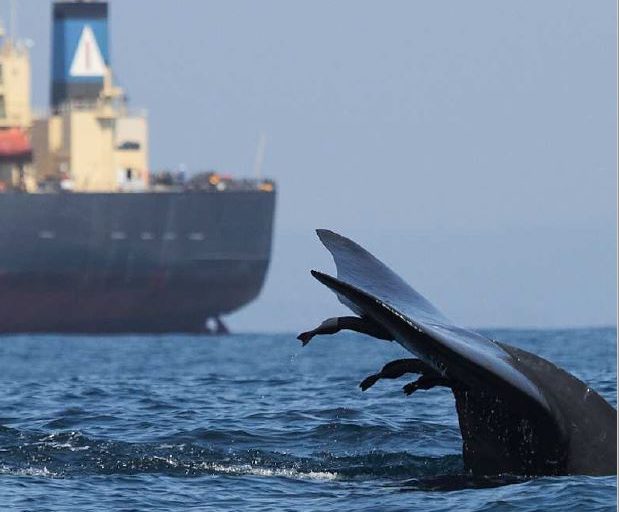 A whale dives near a busy shipping lane off southern Sri Lanka. Image courtesy of Oceanswell.

Maritime expert Ayesh Ranawaka said sending ships on a detour would have an immediate economic impact. The prospect of ships having to sail a longer distance will make it less likely that they will choose to dock in Sri Lanka for refueling and other services, he told Mongabay. And the revenue that ports like Hambantota would be missing out on wouldn’t be compensated for by the growth of the whale-watching industry in Mirissa, Ranawaka said.

He said there are other ways to prevent ship strikes, such as marking out on maritime charts the areas where whales are likely to occur, which would give crews time to slow down. Ranawaka also suggested the use of acoustic deterrent devices to keep whales away from ships, noting their use in other countries. 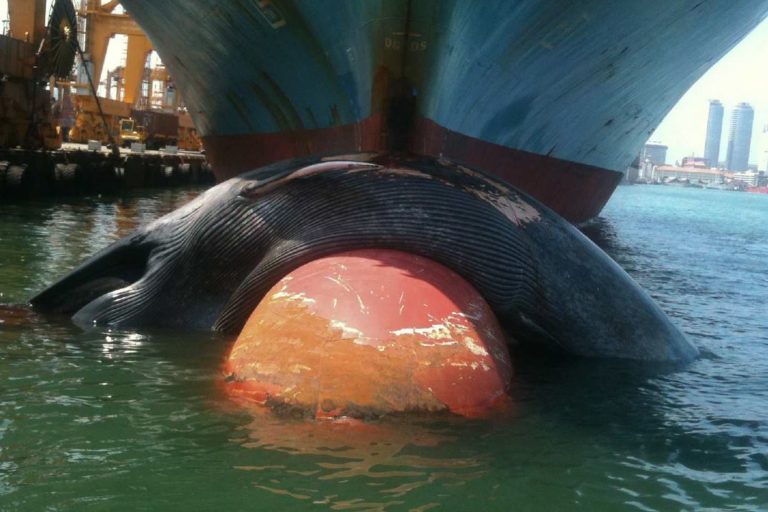 A blue whale lies dead, snagged on the bow of the CMA CGM Quartz container ship at the port of Colombo in March 2012. Image courtesy by Sopaka Karunasundara.

The first formally documented ship strike in Sri Lanka was that of a sperm whale that washed ashore in Mannar district, on the island’s northwest coast, in 1889. But it wasn’t until 2004, when a container ship docked at the Colombo port with a Bryde’s whale draped across its bow, that most Sri Lankans became aware of this specific threat to the whales, Nanayakkara said.

Getting detailed records of whale-vessel collisions is difficult for several reasons. Crews often aren’t aware when their ship hits a whale, and when they are, they don’t always report it. Whales in Sri Lankan waters typically make short, shallow dives and spend a relatively high proportion of their time feeding, socializing and resting at the surface, making them more susceptible to ship strikes, Nanayakkara said.

The 15-nautical-mile (28-kilometer) detour that MSC has ordered its ships to take to avoid the areas frequented by whales. Image courtesy of the Mediterranean Shipping Company.

De Vos said the true scale of whale deaths is likely higher than what’s been documented.

“Vessel strike mortality in baleen whales may be 10 times higher than observed, as it is expected that most struck individuals go undetected and/or sink offshore without being documented,” she said. “For much of the year, surface currents and offshore winds are also likely to carry floating carcasses offshore [away from] southern Sri Lanka. This leaves a big chance that many carcasses go undetected.”