Cabinet approves amendment to the constitution in a move to appease protesters calling for President Gotabaya Rajapaksa to quit.

The Sri Lankan cabinet has approved constitutional reforms that will limit the powers of the president in a move aimed at appeasing the protesters calling for President Gotabaya Rajapaksa to quit over the country’s worst economic crisis in decades.

The decision to amend the constitution to clip the president’s wide-ranging powers was taken in a cabinet meeting on Monday, Dinouk Colombage, media adviser for Prime Minister Ranil Wickremesinghe, told Al Jazeera on Tuesday.

A draft of the so-called 21st amendment to the Sri Lankan constitution gives some powers back to the parliament and restores independence to commissions in key decision making.

“The 21 amendment was tabled and passed in cabinet today,” tourism minister Harin Fernando said in a tweet, adding that the proposal will now be sent to the country’s parliament where it needs the votes of two-thirds of its members.

In October 2020, less than a year after becoming the president, Gotabaya, with the help of his elder brother, Prime Minister Mahinda Rajapaksa, had moved the 20th amendment in parliament, which gave the presidency sweeping powers.

The changes then allowed the president to hold ministries as well as appoint and fire ministers. It also made the president the appointing authority of the elections, public service, police, human rights, and bribery or corruption investigation commissions.

Sri Lanka has been ruled under a powerful executive presidential system since 1978, but a reformist government in 2015 clipped much of the president’s powers and gave them over to the parliament and independent commissions, saying successive presidents had been more authoritarian.

As the country reeled under its worst ever economic crisis, largely blamed on the powerful Rajapaksas, President Gotabaya had hinted at giving in to the demands of reducing his powers to assuage the protesters.

The removal of the Rajapaksas from public office had been one of the main demands of the months-long protests over the economic crisis in the island nation of 22 million people. 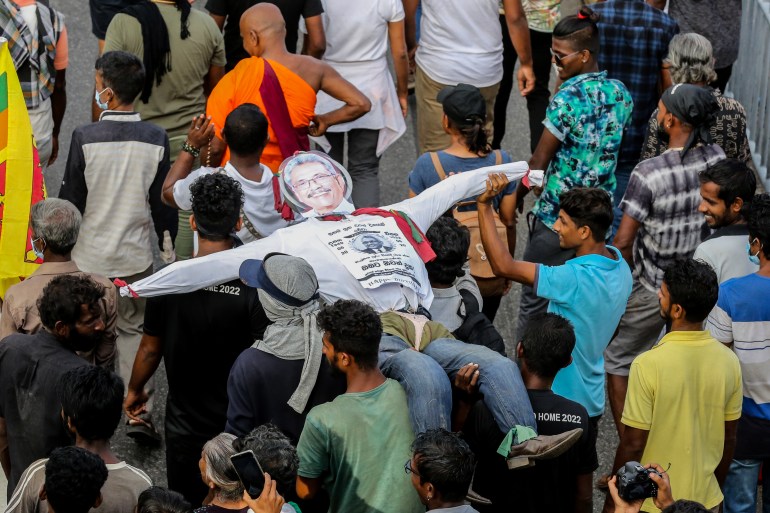 Economic mismanagement and the COVID-19 pandemic have left Sri Lanka battling its worst financial problems in seven decades, and a shortage of foreign exchange has stalled imports of essentials including fuel, food and medicines.

On Monday, a nine-member International Monetary Fund (IMF) team arrived in the commercial capital of Colombo for talks with Prime Minister Wickremesinghe on how to structure what will be the country’s 17th loan programme with the global lender.

In a statement shared with Al Jazeera on Tuesday, Prime Minister Wickremesinghe’s office said he also held discussions with Chinese officials on Tuesday and “reiterated Sri Lanka’s adherence to the ‘One China Policy'”.

“He also stated that Sri Lanka was looking forward to discussing the debt restructuring with China,” the statement said, adding that China reassured Sri Lanka of donating rice to “help ease the food crisis”.

Sri Lanka suspended payment on $12bn of foreign debt in April and is seeking up to $3bn from the IMF to put its public finances on track and access bridge financing.

But public distress at the prolonged shortages is growing. Thousands of students from state universities marched in Sri Lanka’s main city of Colombo on Monday to demand the president and prime minister resign.

The protesters blocked an entrance to the finance ministry on Monday and police had to help out an official due to attend the IMF talks.