Policy makers are assessing effects of interest hikes this year on cooling price growth, amid an unprecedented economic crisis.

The Central Bank of Sri Lanka (CBSL) has kept its key rates steady, a widely anticipated move as it awaits the effect of past hikes to trickle through the economy while a fall in global commodity prices is also expected to soothe domestic inflation.

The Standing Lending Facility rate stayed at 15.5 percent on Thursday, while the Standing Deposit Facility Rate remained at 14.5 percent.

Eleven out of 15 economists and analysts polled by the Reuters news agency had expected rates to remain unchanged.

The central bank has raised rates by a record 950 basis points so far this year to battle high inflation in Sri Lanka, which is wilting under a severe economic crisis.

A foreign exchange shortage has left the government struggling to pay for essential imports of fuel, fertilisers, food and medicine.

Inflation hit 60.8 percent year-on-year in July, and food costs expanded by a searing 90.9 percent, according to the latest government data.

“In arriving at this decision, the board considered the latest model-based projections, which point towards a larger than expected contraction in activity and a faster than expected easing of price pressures,” CBSL said in a statement.

The bank said the measures taken by it and the government so far would help contain aggregate demand pressures while an anticipated decline in global commodity prices would pass through to domestic prices. 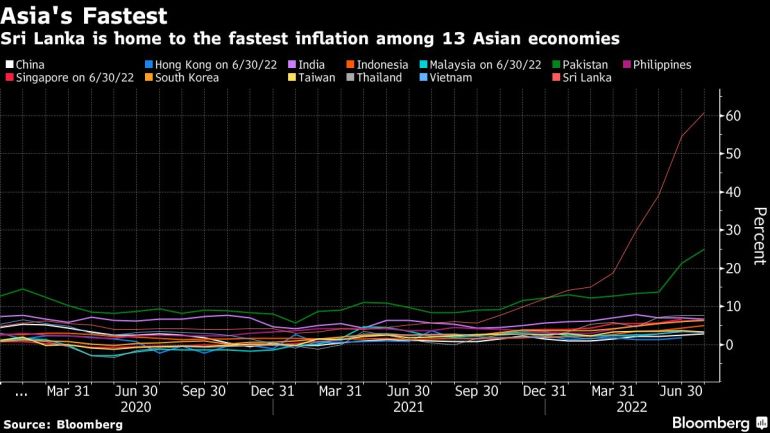 “Given the dynamic crisis situation, going ahead it will be important to see if these initial signs of stabilisation continue in the positive direction the CBSL foresees, supported by progress on the IMF and debt restructuring negotiations,” said Thilina Panduwawala, head of research at Frontier Research.

The central bank said the effect of persistent supply side disruptions, primarily due to shortages of power and energy, and uncertainties associated with socio-political developments are expected to have caused “significant adverse effects” on economic growth in the second quarter.

Tens of thousands of people protesting against the economic crisis forced the resignation of then-President Gotabaya Rajapaksa in July. He was replaced by veteran politician Ranil Wickremesinghe.

The central bank said growth was likely to remain subdued in the third quarter as well.

Analysts said the economy will undergo a steep contraction this year.

“Our GDP [gross domestic product] forecasts remain unchanged at a 7.5 percent-9 percent contraction at this point. The 2Q and 3Q will definitely be the worst hit. The steepest is likely to come in 2Q given the political tensions and fuel shortages seen in June and July,” said Lakshini Fernando, a macroeconomist with Asia Securities.