Colombo, July 14: The Sri Lankan Army and police have been empowered to enforce law and order of the country and maintain the same in order to protect people, public property and lives.

The Army in a statement urged the protestors to ''desist from all forms of violence immediately or be prepared to face consequences as members of the Armed Forces are legitimately empowered to exercise their force, if the situation deems necessary as security to the public property, key installations, vulnerable points and human lives, does fall within the purview of their responsibility.'' 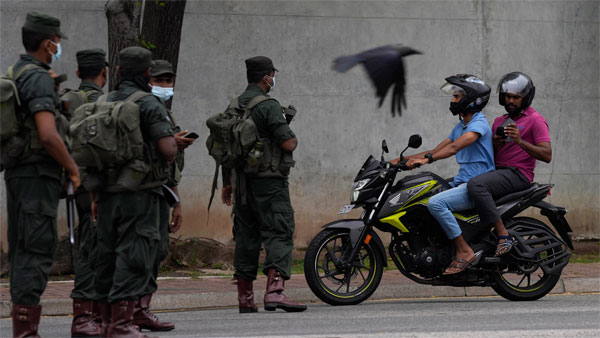 It said that all heads of the armed forces and the police during meetings with the acting President and Prime Minister Ranil Wickremesinghe, Speaker of the Parliament and political party leaders unanimously maintained that peaceful protests should not in anyway be dealt with full force, but with the minimum force as long as those protesters do not resort to violence or damage the public property.

The Army said ''irrespective of those assurances a certain section of the protesters, purposefully deviating from its proclaimed non-violent approach continued to breach law and order and resorted to violence by trying to place the Parliament complex as well as the Speaker's official residence under siege.''

It said that despite repeated appeals of Army personnel, the ''unruly protesting mobs'' on Wednesday tried to forcibly enter Parliament complex aggressively went on harassing and attacking the troops on duty using clubs, iron rods, stones, helmets, etc and snatched TWO T-56 weapons with ammunition rounds and caused injuries to a dozen of Army personnel.

It said the army troops on Wednesday used minimum force and brought the situation under control.

Submit your resignation or will consider other options: Sri Lanka Speaker tells President

At least 84 people were hospitalised when protesters clashed with the security forces at the prime minister's office and at the main access junction to Parliament on Wednesday after President Gotabaya Rajapaksa fled the country. The police fired tear gas and water cannons at the mob who were trying to break barriers and enter the restricted zone.

Authorities on Wednesday imposed a curfew in the Western Province following the eruption of violence. The curfew was lifted in the morning. But it had to be reimposed amid fears of violence as there was no word from President Rajapaksa on his resignation.

Anticipating more protests after a group attempted to storm Parliament's entrance a day earlier, troops in green military uniforms and camouflage vests reinforced security at the Parliament on Thursday.

Wednesday's protests were more directed at Wickremesinghe. Calls for his resignation intensified after he was appointed the acting president. Political party leaders are asking him to step down so that Speaker Mahinda Yapa Abeywardena can take control as acting president. Wickremesinghe in a statement asked the Speaker to find a suitable nominee to become the prime minister in an all-party interim government.

However, the protesters have demanded that the interim government must only consist of politicians acceptable to them.