Home » Sri Lanka in crisis: What, why and how?

Sri Lanka in crisis: What, why and how?

Unprecedented economic crisis looks to have finally toppled President Gotabaya Rajapaksa as he flees to the Maldives.

Rajapaksa fled to the Maldives early on Wednesday after months of turmoil culminated in protesters converging on the presidential residence.

Prime Minister Ranil Wickremesinghe declared a state of emergency and a curfew with immediate effect as thousands of people demanding his resignation surrounded his office in the capital Colombo.

The speaker of parliament said Rajapaksa had approved Wickremesinghe acting as president, invoking a section of the constitution dealing with times when the president is unable to fulfil his duties.

How serious is the crisis? The government owes $51bn and is unable to make interest payments on its loans. Tourism, an important engine of economic growth, sputtered because of the pandemic. Country’s currency has collapsed by 80 percent, making imports more expensive and worsening inflation. The Finance Ministry says Sri Lanka has only $25m in usable foreign reserves and needs $6bn to stay afloat for six months. The result is a country on the edge of bankruptcy, with hardly any money to import fuel, milk, medicine and even toilet paper. How did it come to this? Sri Lanka’s debt-laden economy has “collapsed” as it runs out of money to pay for food, fuel and medicine. The island is relying on help from neighbouring India, China and from the International Monetary Fund (IMF). Wickremesinghe, who took office in May, said the economy was heading for “rock bottom”. Sri Lankans are skipping meals as they line up for hours to buy scarce fuel and cooking gas. Analysts say economic mismanagement by successive governments weakened Sri Lanka’s public finances. Situation was exacerbated by deep tax cuts enacted by Rajapaksa government soon after it took office in 2019. Months later, the COVID-19 pandemic struck, wiping out much of Sri Lanka’s revenue base, mainly from tourism. Remittances from nationals working abroad dropped, forcing the government to draw from foreign exchange reserves. Fuel shortages led to long queues at filling stations as well as frequent blackouts, hospitals ran short of medicine. Runaway inflation reached 54.6 percent last month and could rise to 70 percent, the central bank said. 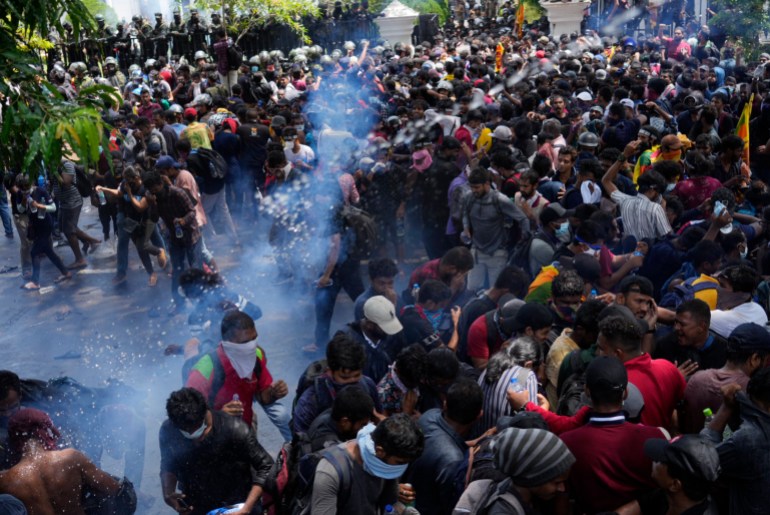 Police use tear gas as protesters storm PM Ranil Wickremesinghe’s office [Rafiq Maqbool/AP] What did the government do? Despite the rapidly deteriorating economic crisis, the Rajapaksa government initially held off talks with the IMF. For months, opposition leaders and experts urged the government to act but it held its ground, hoping tourism would bounce back. Much of public’s anger is focused on President Gotabaya Rajapaksa and his brother, ex-Prime Minister Mahinda Rajapaksa. In April 2021, the president banned imports of chemical fertilisers, a move that decimated staple rice crops, driving prices higher. Eventually, the government sought help from India and China – regional powers jostling for influence over the island. India says it provided support worth over $3.5bn this year. China intervened less publicly but said it supports the nation’s efforts to restructure its debt. Sri Lanka eventually opened talks with the IMF. What happens next? A sitting president removed by street protests is unprecedented in Sri Lanka’s post-independence history. PM Wickremesinghe has taken over as acting president, a move that is questioned by legal experts. Bailout talks with the IMF continue, with Wickremesinghe saying he expects a preliminary agreement by late July. “Sri Lanka pins last hopes on IMF,” said a recent headline in the Colombo Times newspaper. Political parties agreed legislators will elect a new president on July 20 but are struggling to form a new government.
written by Al Jazeera – Breaking News, World News and Video from Al Jazeera Wed Jul 13, 9:34 am Source