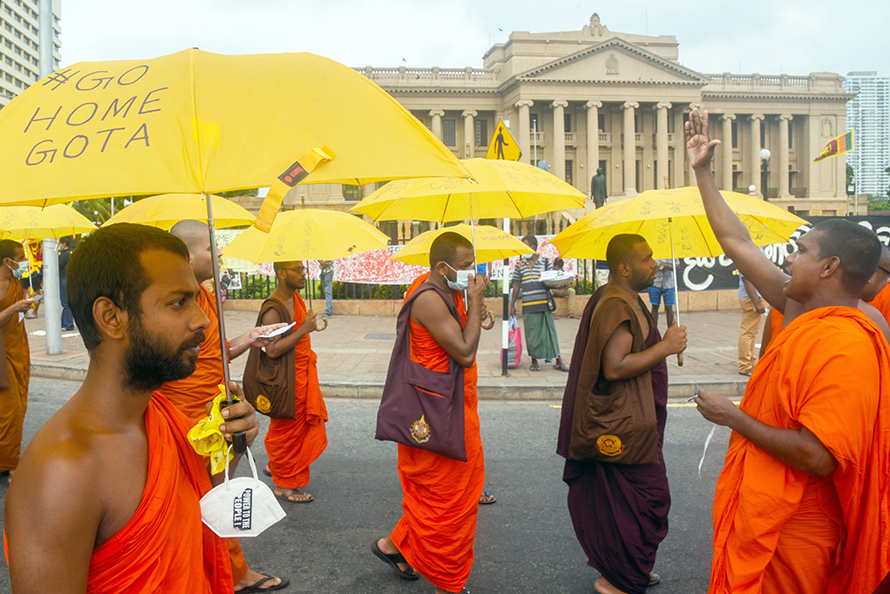 Get this government out: inter-university Bhikkhu Federation protest against Sri Lanka’s economic crisis in Colombo, May 2022

The Rajapaksa family have been in power in Sri Lanka for most of the past 17 years; Mahinda Rajapaksa was president from 2005 to 2015 and his brother Gotabaya has occupied the top job since 2019. Their support comes from the Sinhalese Buddhist majority (over 70% of the population) and was boosted by the army’s victory over the Tamil Tigers in 2009 ; in office, they have instrumentalised Buddhism and called for a return to ‘cultural authenticity’, which is in fact a fantasy version of the country’s pre-colonial past.

Despite human rights abuses against Tamil separatists and Sinhalese opponents, their popularity endured. It also survived restrictions on the press and judiciary, the army’s growing role in public life, and favouritism and corruption among the ruling clan. Gotabaya Rajapaksa won the 2019 presidential election and his party secured a big parliamentary majority in August 2020. These victories removed the sting of Mahinda’s defeat in 2015 by an alliance of civil society activists and the old conservative-liberal United National Party led by Ranil Wickremesinghe.

A factor in the Rajapaksas’ success since 2015 has been their encouragement of extremist anti-Muslim Buddhist movements on the Burmese model; Sri Lanka’s Muslim minority (8% of the population) have come to represent the enemy within, replacing the defeated Tamil minority. The Easter bombings on 21 April 2019 targeting hotels and Christian churches, which killed 258 people including 42 foreign nationals, served to reinforce such views; the Islamist group responsible had been on the intelligence services’ radar, and Wickremesinghe’s government (2015-19) was blamed for laxity, although the commission of inquiry investigating whether government manipulation played a role has been unable to complete its work.

The other pillar of Gotabaya Rajapaksa’s regime is the army, where he began his career in the 1980s, using counter-insurgency techniques against Tamil separatists and (...)

(2) Umesh Moramudali, ‘Taxation in Sri Lanka: issues and challenges’ in Economy for All, University of Colombo, 2022.