Sri Lanka presidency a close contest after frontrunner pulls out

Colombo, Sri Lanka – Three candidates are in the race to be the next Sri Lankan president after former leader Gotabaya Rajapaksa fled the country and resigned last week over the island’s worst-ever economic crisis.

Acting President Ranil Wickremesinghe will face the opposition-backed candidate Dullas Alahapperuma and Marxist party leader Anura Kumara Dissanayake in the vote to be held on Wednesday, the parliament announced during a brief session on Tuesday.

Sajith Premadasa, who was earlier backed by the opposition as their candidate and was likely a frontrunner, has pulled out of the race.

Premadasa’s decision to withdraw from the race has made the election to replace Gotabaya Rajapaksa a close contest.

The parliamentary session on Tuesday was held amid tight security although the protesters had announced they will not disrupt the meetings to elect the next president.

Alahapperuma is a former education minister and dissident parliamentarian from the ruling Sri Lanka Podujana Peramuna (SLPP), controlled by the powerful but now unpopular Rajapaksa clan.

Alahapperuma’s name was seconded by G L Peiris, the SLPP chairman, indicating a rift within the ruling coalition as many SLPP legislators are believed to be supporting Wickremesinghe too.

Reports coming in that some party leaders have told their MPs to take pics through their mobiles of their ballot papers tomorrow to prove who they have voted for.

Tomorrow's election is through a secret ballot. #SriLankaCrisis #SriLanka

Wickremesinghe’s name was proposed by the ruling party leader in the parliament, Dinesh Gunawardena, who is likely to become the prime minister if the acting president wins the presidency.

Left-wing leader Dissanayake of the National Peoples’ Power party is the third candidate. Since the party has only three members in parliament, he is unlikely to be a challenger.

Analysts are of the opinion that Wickremesinghe is ahead in the race as a majority of legislators from the ruling SLPP are backing him.

Protest leaders had urged the opposition to field a united candidate to defeat Wickremesinghe, whose closeness with the Rajapaksas angers them.

The 76-year-old veteran leader stood his ground after becoming the prime minister in May and refused to resign, as demanded by the protesters.

Sri Lanka, a country of 22 million people, is struggling with severe shortages of fuel and other essentials.

Its economy has collapsed and foreign exchange reserves are depleted, forcing it to hold bailout talks with the International Monetary Fund. 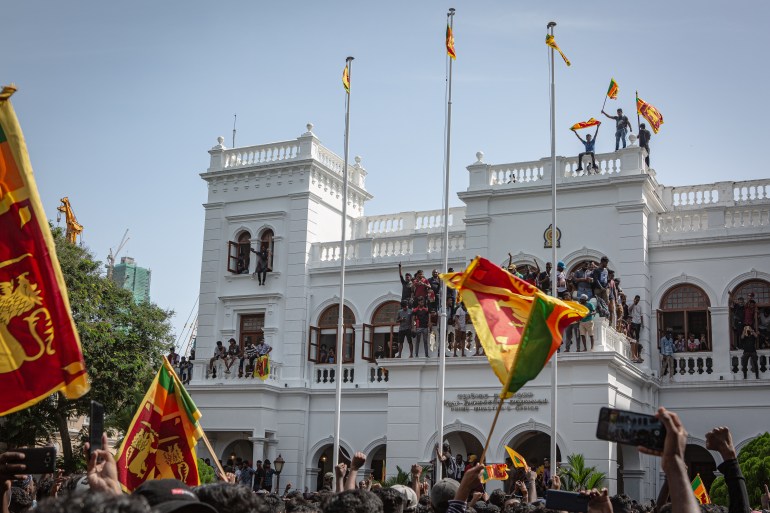 Shanakiyan Rasamanickam, a legislator from the Tamil National Alliance (TNA) – the biggest Tamil political party which has a decisive group of 10 MPs in Sri Lankan parliament – told Al Jazeera the party legislators will meet later on Tuesday to discuss which candidate to support.

The Sri Lanka Freedom Party (SLFP), which has 15 MPs within the ruling collation, has announced that it will abstain from the vote.

Any candidate who secures 113 votes in the 225-member parliament wins the presidency.

But since there is no unanimity in any Sri Lankan political party right now, it is not clear how many MPs would stick with party decisions when they cast their secret vote on Wednesday.

Senaratne also claimed the SLFP might reverse its decision to abstain from the vote. He said at least 41 MPs from the ruling SLPP would support Alahapperuma’s candidacy. 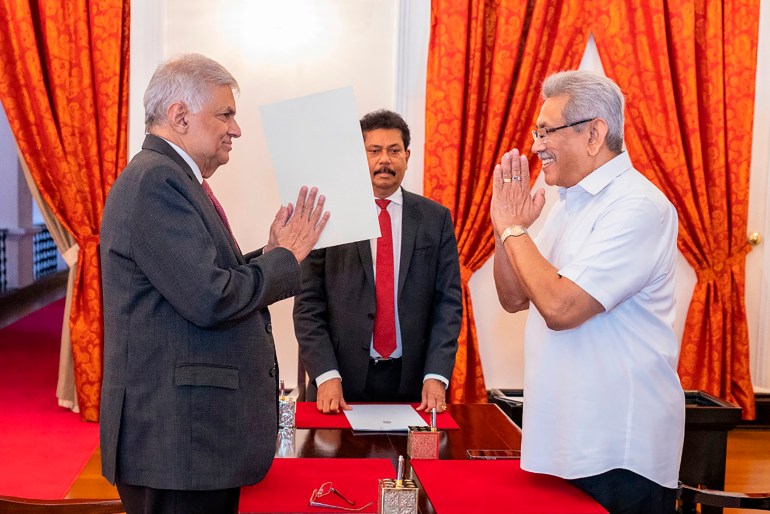 Wickremesinghe has pledged to reinvestigate the 2019 Easter Sunday attacks and to reintroduce the 19th amendment to the constitution, which reduces sweeping powers enjoyed by the president.

According to reliable sources, many former ministers and members of the Rajapaksa family are campaigning for his candidacy.

Speaking to Al Jazeera before the presidential candidates were announced, former minister Dr Nalaka Godahewa said he is “confused” as to who represents the SLPP.

“It is applicable to every party in this parliament, apart from the United National Party simply because it has only one MP – Ranil Wickremesinghe,” said Jayasekara, a former media official in the presidential secretariat.

“Therefore, during this election, the MPs are divided into two categories: their political allegiances and certain privileges they are thought to be offered.”

Meanwhile, protesters are expected to march from Colombo Fort to the sea-facing GotaGoGama protest camp later on Tuesday, urging Wickremesinghe to resign immediately as acting president.

“Go Ranil before we chase you away,” a banner released by the protesters said.