written by Top Stories Tue Jul 12, 10:48 pm Source
Protesters in Sri Lanka have defied tear gas, water cannon and a state of emergency to storm the prime minister's office after the president fled overseas, with the crowd demanding both men step down in the face of an economic crisis.In a televised statement on Wednesday Prime Minister Ranil Wickremesinghe said he had instructed the military and police to do "what is necessary to restore order".But footage showed armed security personnel standing by in the grounds of his office as protesters, some holding national flags, milled and took pictures.

Other demonstrators at one point broke into state television studios, as the country's months-long political and economic crisis appeared to be moving towards a climax.Meanwhile, President Gotabaya Rajapaksa - who has fled the country and is currently in the Maldives - is expected to head next to Singapore, a government source said.

Maldives media reported that Singapore was likely to give Mr Rajapaksa asylum. Sri Lanka declared a state of emergency, but it failed to stop protesters. Source: Getty / AFP

Mr Rajapaksa promised at the weekend to resign on Wednesday after escaping his official residence in Colombo just before tens of thousands of protesters overran it.As president, Mr Rajapaksa enjoys immunity from arrest, and he is believed to have wanted to go abroad before stepping down to avoid the possibility of being detained. The 73-year-old, his wife and two bodyguards took a military aircraft to the neighbouring Maldives, immigration sources told news agency AFP.Hours later, with no formal announcement he was stepping down, thousands of demonstrators mobbed the office of Mr Wickremesinghe — whom Mr Rajapaksa named as acting president during his absence — demanding both officeholders should go."Go home Ranil, Go home Gota," they shouted.

Police stationed outside had fired several rounds of tear gas but the protesters were not deterred and surged into the compound. 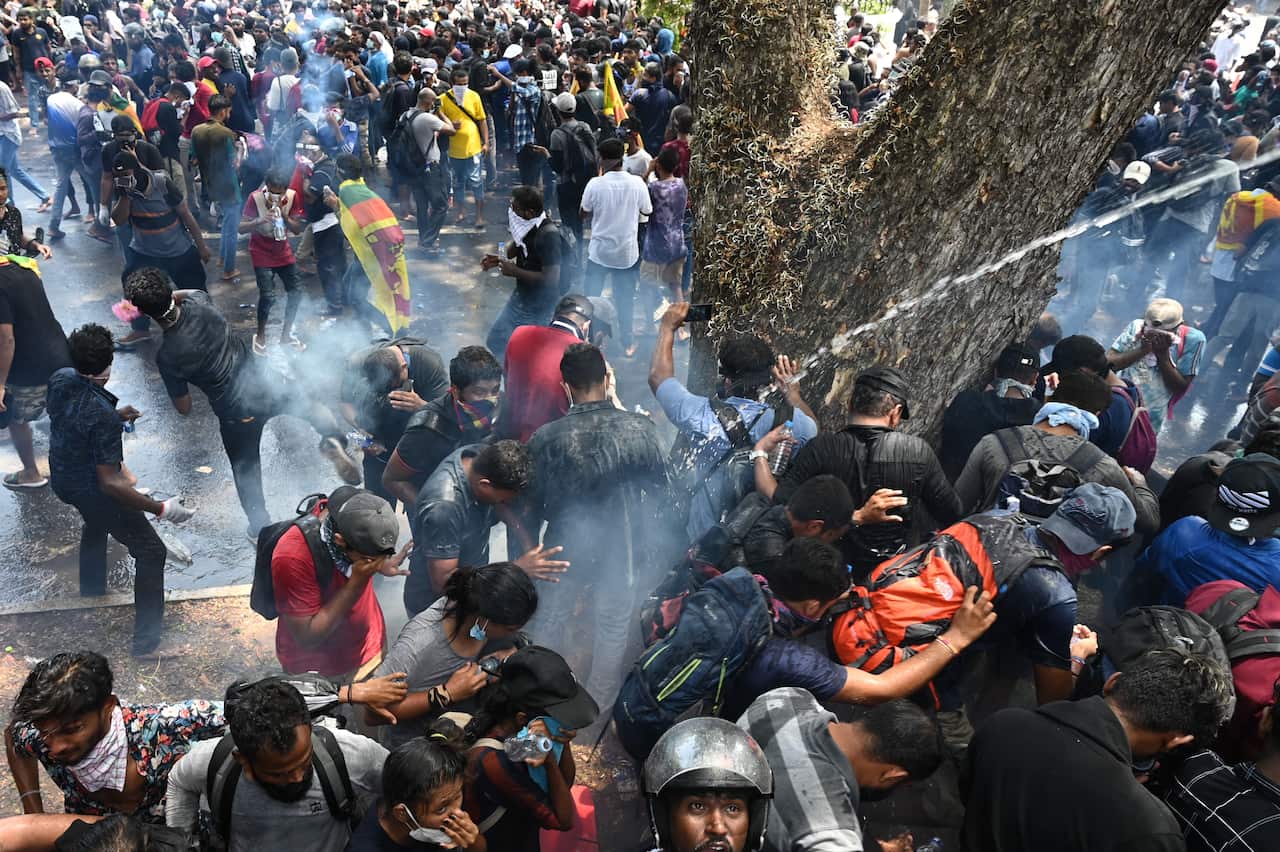 Local media said a 26-year-old protester who was hospitalised after being tear-gassed died of breathing difficulties.Mr Wickremesinghe, also 73, would automatically become acting president if Mr Rajapaksa steps down, but has himself announced his willingness to resign if consensus is reached on forming a unity government."We can't tear up our constitution," he said in his statement. "We can't allow fascists to take over. We must end this fascist threat to democracy," he said, adding that the official buildings occupied by protesters must be returned to state control.Authorities declined to reveal the whereabouts of Mr Wickremesinghe.

The protesters' actions were a repeat of the capture of President Gotabaya Rajapaksa's home and office on Saturday when Mr Wickremesinghe's private home was also set ablaze. Resignation not yet confirmed

Despite his flight, Mr Rajapaksa's resignation was not yet confirmed by late Wednesday.Earlier, the parliament Speaker, Mahinda Yapa Abeywardena, said Rajapaksa had phoned him and told him his resignation letter would arrive later on Wednesday.An aide to Mr Abeywardena had no update on the letter late in the day.

The succession process could take between three days — the minimum time needed for parliament to elect an MP to serve out Mr Rajapaksa's term, which ends in November 2024 — and a maximum of 30 days allowed under the statute. 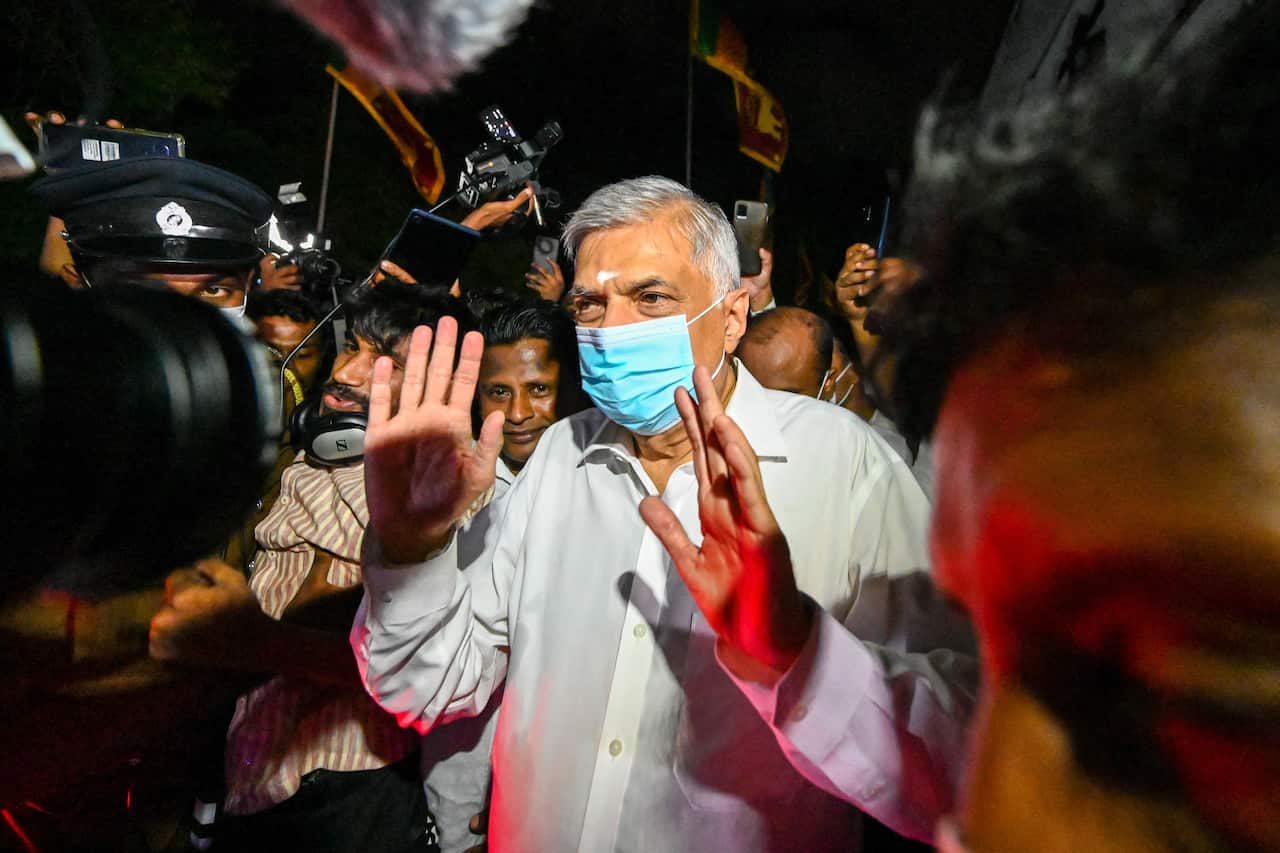 A top ruling party source told Reuters Mr Wickremesinghe was the party's first choice, although no decision had been taken.An attempt by Wickremesinghe to cling on would infuriate the protesters who say he is a close ally of the Rajapaksa family, which has dominated the country since Rajapaksa's older brother Mahinda became president in 2005."An MP with one seat is appointed as PM. Now the same person is appointed as acting president," the opposition presidential nominee, Sajith Premadasa, said on Twitter.

"This is the Rajapaksa style of democracy. What a farce. What a tragedy."

Mr Rajapaksa is accused of mismanaging the economy to a point where the country ran out of foreign exchange to finance even the most essential imports, leading to severe hardships for its 22 million people.Earlier Wednesday, smiling Sri Lankans again thronged the corridors of after his departure, with young couples walking around hand in hand in a mood of quiet celebration."People are very happy, because these people robbed our country," said retired civil servant Kingsley Samarakoon, 74.

"They've stolen too much money, billions and billions."

But he held little hope for an immediate improvement in Sri Lanka's plight."How are people going to run the country without money?" he asked. "It's a problem."Sri Lanka defaulted on its US$51 billion (A$75 billion) foreign debt in April and is in talks with the IMF for a possible bailout.The island has nearly exhausted its already scarce supplies of petrol. The government has ordered the closure of non-essential offices and schools to reduce commuting and save fuel.The departure of Rajapaksa, 73 and once known as "The Terminator", had been stymied for more than 24 hours in a humiliating standoff with immigration personnel in Colombo.

He had wanted to fly to Dubai on a commercial flight, but staff at Bandaranaike International withdrew from VIP services and insisted that all passengers had to go through public counters. On arrival in the Maldives on Wednesday, Mr Rajapaksa was driven to an undisclosed location under police escort, an airport official in the capital Male said.His youngest brother Basil, who resigned in April as finance minister, missed his own Emirates flight to Dubai on Tuesday after a tense standoff of his own with airport staff.The leader of the main opposition Samagi Jana Balawegaya party, Sajith Premadasa, who lost the 2019 presidential election to Rajapaksa, has said he will stand for the presidency.

Mr Premadasa is the son of former president Ranasinghe Premadasa, who was assassinated in a Tamil rebel suicide bombing in May 1993.