Thousands occupying the presidential palace are determined to stay until both the president and PM step down officially.

Protesters in Sri Lanka’s capital Colombo continue to occupy the offices of the president and prime minister for a second consecutive day, vowing they will stay put until both officially have resigned.

Determined to see the country’s top leaders step down amid an unprecedented economic crisis, thousands of people stormed the president’s residence on Saturday and later set fire to the prime minister’s house, forcing the two leaders into hiding.

Prime Minister Ranil Wickremesinghe said he will leave office once a new government is in place, while Speaker of Parliament Mahinda Yapa Abeywardena said President Gotabaya Rajapaksa, 73, would step down as president on Wednesday.

But protesters are refusing to budge until the two leaders have officially left their posts.

“Our struggle is not over,” student leader Lahiru Weerasekara told reporters on Sunday.

“We won’t give up this struggle until he actually leaves.”

Playwright Ruwanthie de Chickera told a news conference at the main protest site in Colombo: “The president has to resign, the prime minister has to resign and the government has to go”.

Flanked by other leaders helping coordinate the movement against the government, she said the crowds would not move out of the official residences of the president and prime minister until then.

Images of people swimming in President Rajapaksa’s pool and running on the treadmills of his private gym have gone viral across the world, marking a dramatic end to the powerful Rajapaksa clan’s two-decade-long hold over Sri Lankan politics.

“I am here because we have to explore what kind of things they have done with our tax money …  politicians should understand the power of people,” a protester inside the president’s residence told Al Jazeera.

Ahilan Kadirgamar, a senior lecturer at the University of Jaffna, noted that protesters were backed by people across the whole country, which has been rocked by harsh economic conditions from north to south.

“Farmers are not being able to cultivate, fisherman have not been able to go to the sea … so support for regime change is island wide,” Kadirgamar said.  “The president and the prime minister have been delegitimised throughout the country.” 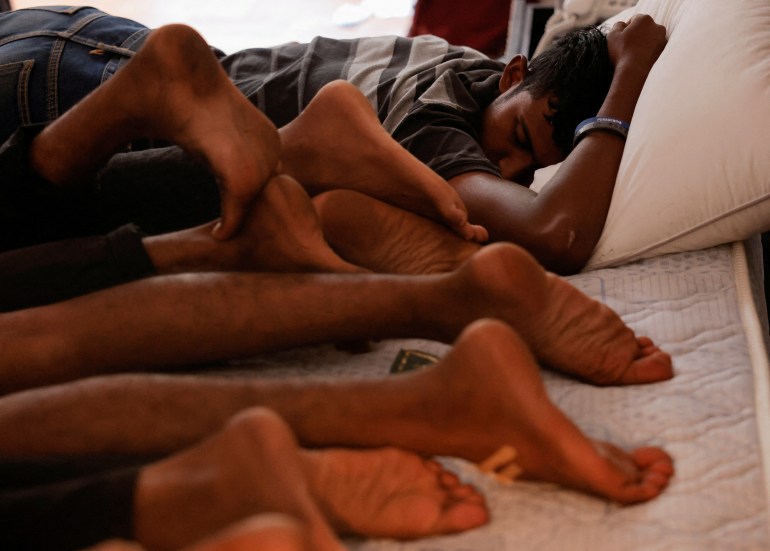 Demonstrators sleep in a bedroom at the president’s house the day after demonstrators entered the building in Colombo, Sri Lanka [Dinuka Liyanawatte/Reuters] Pressure on both men

Opposition parties were meeting in the capital on Sunday to agree on a new government. On the same day, a statement from the president’s office said that Rajapaksa had ordered officials to start immediate distribution of a cooking gas consignment, suggesting that he was still at work.

Pressure on both the president and  prime minister has grown as the country’s economic meltdown has led to acute shortages of essential items, leaving people struggling to obtain food, fuel and other necessities.

Rajapaksa appointed Wickremesinghe as prime minister in May in an effort to solve the shortages and start economic recovery.

Wickremesinghe had been part of crucial talks with the IMF for a bailout programme and with the World Food Programme to prepare for a predicted food crisis. Protesters stay and play cards in the prime minister’s official residence a day after it was stormed in Colombo, Sri Lanka [Eranga Jayawardena/Reuters] ‘Hazardous’ job

Political analyst Aruna Kulatunga said whoever takes on the task of stabilising Sri Lanka, it will not only be a hard but also a “hazardous” job.

“The many pitfalls ahead could include decisions to be made on whether or not we go for an IMF-backed debt rescheduling or will we simply decide to be a pariah state and simply stop acknowledging our debt to the rest of the world,” he told Al Jazeera.

Or, Sri Lanka’s future leader might “seek refuge in geopolitical gamesmanship by requesting help from other nations who are not in the mainstay of global economics”, Kulatunga said.

The economic crisis in Sri Lanka began earlier this year after the government suspended repayment of foreign loans due to a foreign currency shortage. The country is holding bailout talks with the International Monetary Fund (IMF) and relying on aid from India and other nations.

Many believe the much-anticipated IMF bailout could be delayed due to the political crisis.

IMF officials told reporters they were hoping for the situation in Sri Lanka to improve.

“We are closely monitoring the ongoing developments in Sri Lanka. We hope for a resolution of the current situation that will allow for resumption of our dialogue,” the IMF said.