Sri Lanka’s prime minister Ranil Wickremesinghe has been sworn in as acting president as the country reels from an economic crisis and unrest.

He replaces Gotabaya Rajapaksa who fled to Singapore after unprecedented mass protests which saw demonstrators overrun the presidential palace.

Protesters defied a curfew to celebrate his resignation during the night.

Sri Lanka is experiencing economic chaos as it faces an acute shortage of food, fuel and other basic supplies.

The process of parliament electing a new president will begin on Saturday, with MPs likely to take a vote in a week’s time.

Given the governing party has a majority, MPs are thought likely to back Mr Wickremesinghe, who has close links with the Rajapaksa family.

But whether Sri Lanka’s public would accept this is another matter, because Mr Wickremesinghe’s resignation as PM was a key demand of protestors.

A demonstrator. Manuri Pabasari, told the BBC at the time that a protest rally against Ranil Wickremesinghe was expected in the coming days.

The governor of Sri Lanka’s central bank, Nandalal Weerasinghe, has warned the country may shut down if no stable government is formed soon.

There was a “lot of uncertainty” over whether enough foreign exchange can be found to pay for essential petroleum, he told the BBC’s Newsnight programme, and progress on getting an international bailout package depended on having a stable administration.

Meanwhile, Singapore says the ousted president Gotabaya Rajapaksa did not ask for political asylum when he arrived there.

The former president, who arrived with his wife and two bodyguards, no longer has legal immunity as a head of state and his position is now more precarious as he tries to find a safe country to shelter in.

He is expected to stay in Singapore for some time before possibly moving to the United Arab Emirates, Sri Lankan security sources told AFP news agency. 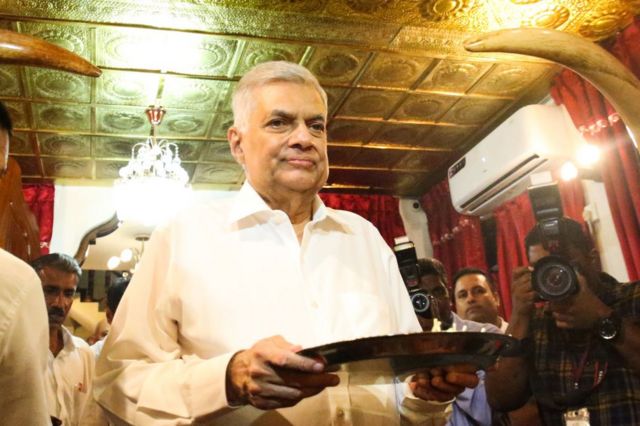 Sri Lanka: The basics Sri Lanka is an island nation off southern India: It won independence from British rule in 1948. Three ethnic groups – Sinhalese, Tamil and Muslim – make up 99% of the country’s 22 million population.One family of brothers has dominated for years: Mahinda Rajapaksa became a hero among the majority Sinhalese in 2009 when his government defeated Tamil separatist rebels after years of bitter and bloody civil war. His brother Gotabaya, who was defence secretary at the time and later became president, fled the country after mass unrest. Presidential powers: The president is the head of state, government and the military in Sri Lanka, but does share a lot of executive responsibilities with the prime minister, who heads up the ruling party in parliament. Now an economic crisis has led to fury on the streets: Soaring inflation has meant some foods, medication and fuel are in short supply, there are rolling blackouts and ordinary people have taken to the streets in anger, with many blaming the Rajapaksa family and their government for the situation.
What’s your Reaction?
+1
0
+1
0
+1
0
+1
0
+1
0
+1
0
+1
0
Facebook Twitter Email
written by CN Fri Jul 15, 12:19 pm Source