Police say four civilians and three soldiers were wounded when shots were fired during unrest sparked by the economic crisis.

Sri Lanka’s military opened fire to contain rioting at a fuel station as unprecedented queues for petrol and diesel were seen across the bankrupt country, officials said.

Troops fired live rounds in Visuvamadu, 365k (227 miles) north of Colombo, on Saturday night after a pump ran out of petrol and a protest by angry motorists escalated and led to a clash with troops, police said.

Police said four civilians and three soldiers were wounded when the army opened fire, marking the first time that the military has used gunfire to quell unrest linked to the worsening economic crisis. 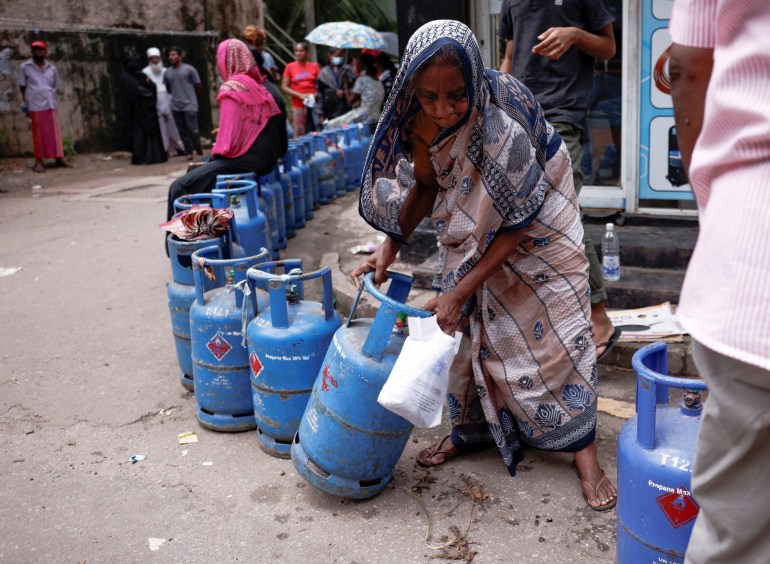 A woman moves a gas tank as she stands in line to buy another tank in Colombo [File: Dinuka Liyanawatte/Reuters]

Sri Lanka is suffering its worst economic crisis since independence, with the country unable to find dollars to import essentials, including food, fuel and medicines.

Many of the country’s 22 million people have to queue up at petrol stations for hours and have been enduring long power cuts for months, all of which has contributed to months of protests, sometimes violent, with demonstrators calling on President Gotabaya Rajapaksa to step down.

Sri Lanka has deployed armed police and troops to guard fuel stations and a motorist was shot dead by police in April in the central town of Rambukkana when a clash erupted over the distribution of rationed petrol and diesel.

Police said clashes involving motorists erupted at three locations over the weekend. At least six police officers were wounded in one clash while seven motorists were arrested.

Earlier this week, Sri Lanka’s government approved a four-day work week for public sector workers to help them cope with the chronic fuel shortage and to encourage them to grow food.

The United Nations has outlined a plan to raise $47m to provide assistance over the next four months to 1.7 million Sri Lankans worst hit by the crisis.

As many as five million people in the country could be directly affected by food shortages in the coming months, according to Prime Minister Ranil Wickremesinghe’s office.

The World Food Programme (WFP) said it began distributing food vouchers to about 2,000 pregnant women in Colombo’s “underserved” areas as part of “life-saving assistance” on Thursday.

The WFP is trying to raise $60m for a food relief effort between June and December.