President Gotabaya Rajapaksa has submitted a letter of resignation to the speaker of Sri Lanka’s parliament, a spokesperson for the speaker said, hours after he fled to Singapore.

The announcement triggered jubilation in the commercial capital Colombo where protesters massed outside the presidential secretariat, defying a city-wide curfew.

“We never thought we would get this country free from them,” she added, referring to the Rajapaksa family who dominated the South Asian country’s politics for two decades.

“The authenticity and the legality of the e-mail will have to be checked out before being formally accepted”, spokespeson Indunil Yapa told the AFP news agency on Thursday.

Rajapaksa submitted his resignation by email late on Thursday and it would become official on Friday, once the document had been legally verified, the speaker’s spokesperson said.

Rajapaksa landed in Singapore on Thursday after fleeing mass protests over his country’s economic meltdown. He travelled on to Singapore on a Saudi airline flight, according to a person familiar with the situation.

Rajapaksa was with his wife Ioma and their two bodyguards. A passenger on the flight, who declined to be named, told Reuters news agency that Rajapaksa was met by a group of security guards and was seen leaving the airport VIP area in a convoy of black vehicles.

Airline staff on the flight told Reuters that the president dressed in black and flew business class, describing him as “quiet” and “friendly”.

Singapore’s foreign ministry confirmed Rajapaksa had been allowed to enter the city-state, but insisted it was for a “private visit”.

“He has not asked for asylum and neither has he been granted any asylum. Singapore generally does not grant requests for asylum,” it said in a statement.

A handful of Sri Lankans were waiting in one of the airport’s arrival areas to voice their anger at Rajapaksa and the economic crisis engulfing their homeland.

“I want to scold him with all the words that I know,” said a Sri Lankan design engineer working in Singapore, who identified himself only as Max.

“He’s responsible for everything that happened in our country,” he told AFP. The city-state is home to a sizeable Sri Lankan diaspora.

But authorities were quick to warn against protests: it is illegal for even one person to stage a demonstration in tightly-controlled Singapore without prior official permission.

In a statement issued after Rajapaksa’s arrival, police urged people to “abide by our local laws” and said “action will be taken against anyone participating in a public assembly that is illegal”. 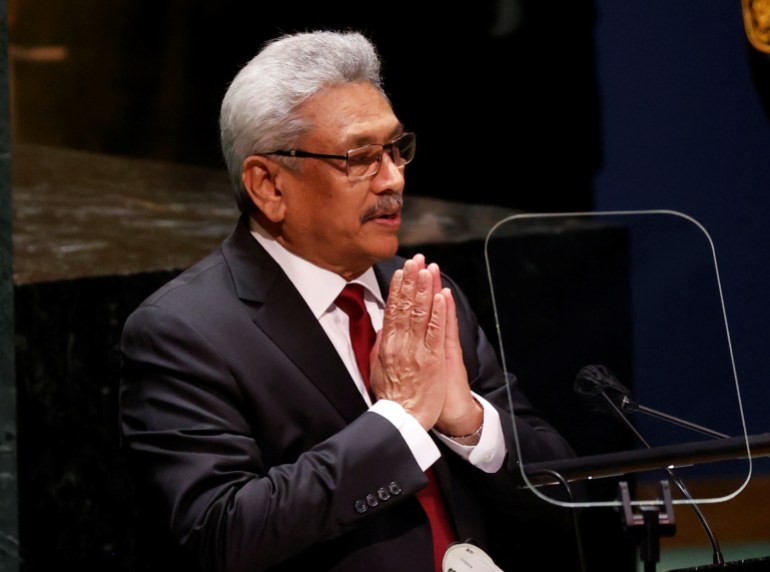 Rajapaksa’s decision on Wednesday to make his ally Prime Minister Ranil Wickremesinghe the acting president triggered more protests, with demonstrators storming parliament and the premier’s office demanding that he quit, too.

“We want Ranil to go home,” Malik Perera, a 29-year-old rickshaw driver who took part in the parliament protests, said on Thursday. “They have sold the country. We want a good person to take over. Until then, we won’t stop.”

Protests against the economic crisis have simmered for months and came to a head last weekend when hundreds of thousands of people took over government buildings in Colombo, blaming the powerful Rajapaksa family and allies for runaway inflation, shortages of basic goods, and corruption. 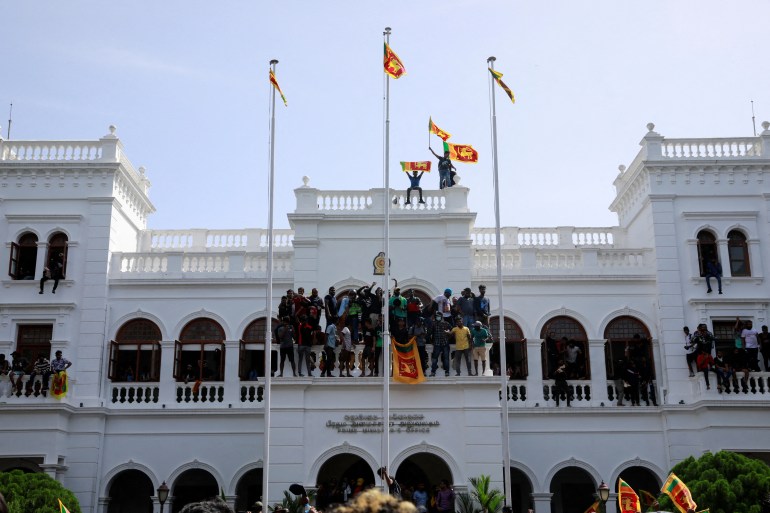 The usual protest sites, however, were calm. Protest organisers handed back the president and prime minister’s residences to the government on Thursday evening.

The government imposed a curfew in Colombo from noon (06:30 GMT) on Thursday to early morning on Friday in a bid to prevent further unrest. Local media showed armoured vehicles with soldiers atop patrolling the city’s streets.

The military said troops were empowered to use force to protect people and public property.

Police said one person was killed and 84 injured in clashes between riot police and protesters on Wednesday near the parliament and prime minister’s office, as people demanded the ouster of both Rajapaksa and Wickremesinghe.

The army said two soldiers were seriously injured when they were attacked by protesters near parliament on Wednesday evening and that their weapons and magazines were snatched.

Police said the man who died was a 26-year-old protester who succumbed after he was injured near the premier’s office.