Former Sri Lankan President Gotabaya Rajapaksa arrives in Bangkok from Singapore, where he was staying since mid-July.

Former Sri Lankan President Gotabaya Rajapaksa, who last month fled anti-government protests in his country, has arrived in Thailand on a flight from Singapore, where he had been staying since mid-July.

He left the airport’s VIP section around 40 minutes later with his wife and got into a black sedan, local media reported.

Officials in Thailand on Wednesday said they had been asked by the Sri Lankan government to allow him entry, and that he would be permitted to stay temporarily. 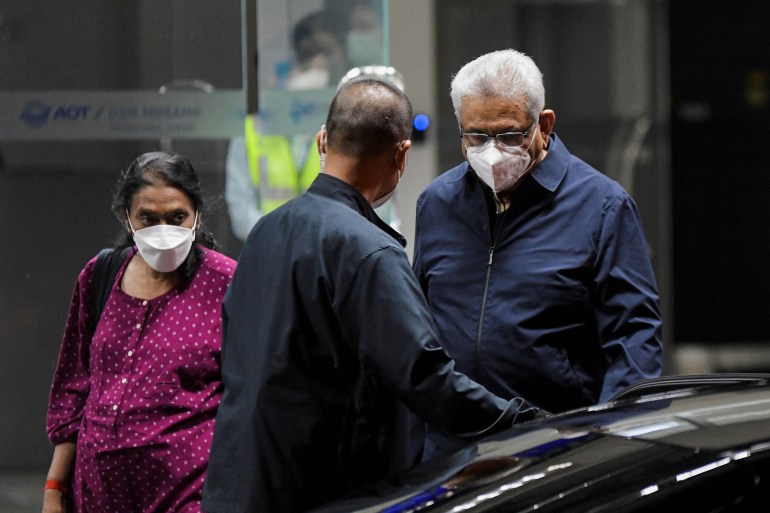 Thai Prime Minister Prayuth Chan-ocha said that he was aware of Rajapaksa’s intended visit and that it was allowed for humanitarian reasons because the former president was seeking asylum in a third country. He did not elaborate but said Rajapaksa would not engage in political activity while in Thailand.

Rajapaksa has made no public comments about his travel plans. After fleeing Sri Lanka last month, he first went to the neighbouring Maldives in a Sri Lankan military plane and then to Singapore, where his visa expired Thursday. He submitted his resignation only after he left Sri Lanka.

Protesters who had occupied official offices and residences in Sri Lanka’s capital, Colombo, blame mismanagement and corruption by the Rajapaksa family for the economic crisis that has led to serious shortages of essentials such as medicines, food and fuel. The island nation is negotiating with the International Monetary Fund for a bailout programme.

Thai Foreign Ministry Spokesperson Tanee Sangrat said Wednesday that Rajapaksa’s “stay is temporary in nature with the aim of onward travel” and that “no political asylum has been sought”. He said that because the former president held a diplomatic passport, he would be allowed to stay for 90 days without a visa.

In addition to being criticised for mismanaging his country’s economy, Rajapaksa has been accused by human rights groups of involvement with war crimes when he was defence secretary during Sri Lanka’s civil war, which ended in 2009.

The South Africa-based International Truth and Justice Project said it had urged Singapore to exercise universal jurisdiction to arrest the former president for grave breaches of international humanitarian law.

Singapore’s Attorney-General’s Chambers confirmed it had received a complaint from the rights group without giving details.

A Rajapaksa confidant told AFP news agency that the former leader was keen to go home as protests against his administration had fizzled out, but his successor Ranil Wickremesinghe had advised him against an early return.

Singapore officials had said he was on a private visit to the city-state and the foreign minister stressed that he was not given any special privileges.

“In general, the Singapore government does not accord privileges, immunity and hospitality to former heads of state or heads of government,” Singapore Foreign Minister Vivian Balakrishnan said in a written reply to a question in parliament last week.

“Consequently, former president Gotabaya Rajapaksa was not accorded any privileges, immunity or hospitality.”