The emergency powers enable troops to arrest and detain suspects for long periods.

Sri Lanka’s parliament has extended a state of emergency declared by President Ranil Wickremesinghe as his government cracks down on demonstrators it accuses of violence while trying to find a way out of the country’s worst economic crisis.

The vote passed by 120 to 63 in the 225-member parliament on Wednesday, while the remaining legislators abstained. The emergency ordinance, which empowers troops to arrest and detain suspects for long periods, would have lapsed on Wednesday if it had not been ratified by parliament.

Wickremesinghe declared a state of emergency last week as acting president before legislators elected him to serve the remainder of Gotabaya Rajapaksa’s five-year term until 2024.

Rajapaksa fled Sri Lanka after thousands of protesters stormed the president’s official residence and other buildings. He later resigned from Singapore. 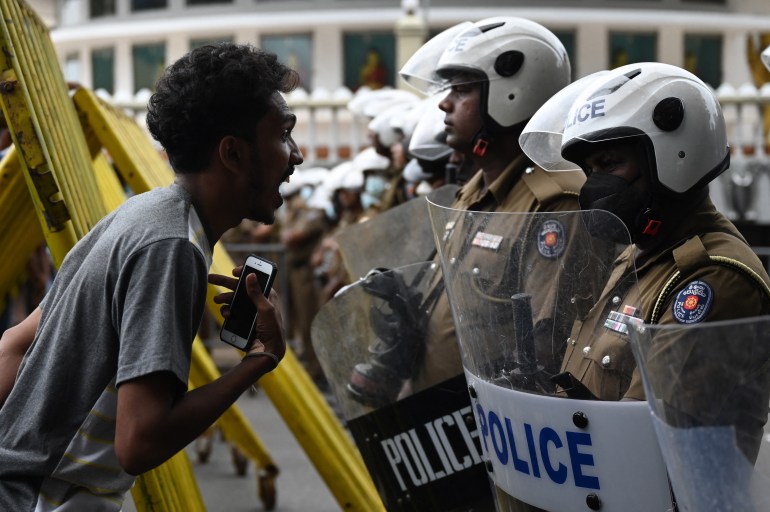 Ruling party members who back Wickremesinghe said that while protests were reasonable at the beginning of the crisis, groups that do not believe in parliamentary democracy and want to capture power through unconstitutional means had infiltrated the demonstrators and were causing disturbances.

Opposition parties criticised the state of emergency as a government move to stifle dissent.

Within a day of Wickremesinghe’s election, the military raided and dismantled camps the protesters had set up for more than 100 days opposite the president’s office. Some protesters were beaten.

Police said in separate Wednesday statements that they had arrested activists Kusal Sandaruwan and Weranga Pushpika on unlawful assembly charges.

Student leader Dhaniz Ali was arrested when he boarded a Dubai-bound flight at the country’s main airport on Tuesday evening. Police said there was a warrant for his arrest in connection with a magistrate’s court case, without giving further details.

Protesters also demanded Wickremesinghe’s resignation and accused him of protecting the Rajapaksa clan, who have dominated Sri Lankan politics for much of the last two decades.

Protests have nearly dismantled Rajapaksa domination, with all six family members who held top government positions since 2019 having been forced to resign.

Sri Lanka is bankrupt and has suspended repayment on its $51bn foreign loans, of which $28bn must be paid by 2027.

The government is in the process of preparing a debt restructuring plan, a condition for an agreement with the International Monetary Fund for a bailout.