written by Top Stories Sat Jul 09, 9:12 am Source
Sri Lanka's president and prime minister have agreed to resign after protesters stormed both officials' homes and set fire to one of the buildings.Prime Minister Ranil Wickremesinghe said on Saturday he will leave office once a new government is in place.

Hours later the speaker of parliament said President Gotabaya Rajapaksa would step down on Wednesday.

Pressure on both men grew as an economic meltdown set off acute shortages of essential items, leaving people struggling to buy food, fuel and other necessities.Police had attempted to thwart promised protests with a curfew, then lifted it as lawyers and opposition politicians denounced it as illegal.Thousands of protesters entered the capital, Colombo, and swarmed into Mr Rajapaksa's fortified residence on Saturday.

Video images showed jubilant crowds splashing in the garden pool, lying on beds and using their phone cameras to capture the moment.

Some made tea, while others issued statements from a conference room demanding the president and prime minister go.It was not clear if Mr Rajapaksa was there at the time, and government spokesman Mohan Samaranayake said he had no information about the president's movements.

Protesters later broke into the prime minister's private residence and set it on fire, Mr Wickremesinghe's office said. It wasn't immediately clear if he was there when the incursion happened. Earlier, police fired tear gas at protesters who gathered in the streets to march on the presidential residence, waving flags, banging drums and chanting slogans. In all, more than 30 people were hurt in Saturday's chaos.Speaker Mahinda Yapa Abeywardena said in a televised statement that he informed Mr Rajapaksa that parliamentary leaders had met and decided to request he leave office, and the president agreed.However, Mr Rajapaksa will remain temporarily to ensure a smooth transfer of power, Mr Abeywardena added.

"He asked me to inform the country that he will make his resignation on Wednesday the 13th, because there is a need to hand over power peacefully," Mr Abeywardena said. 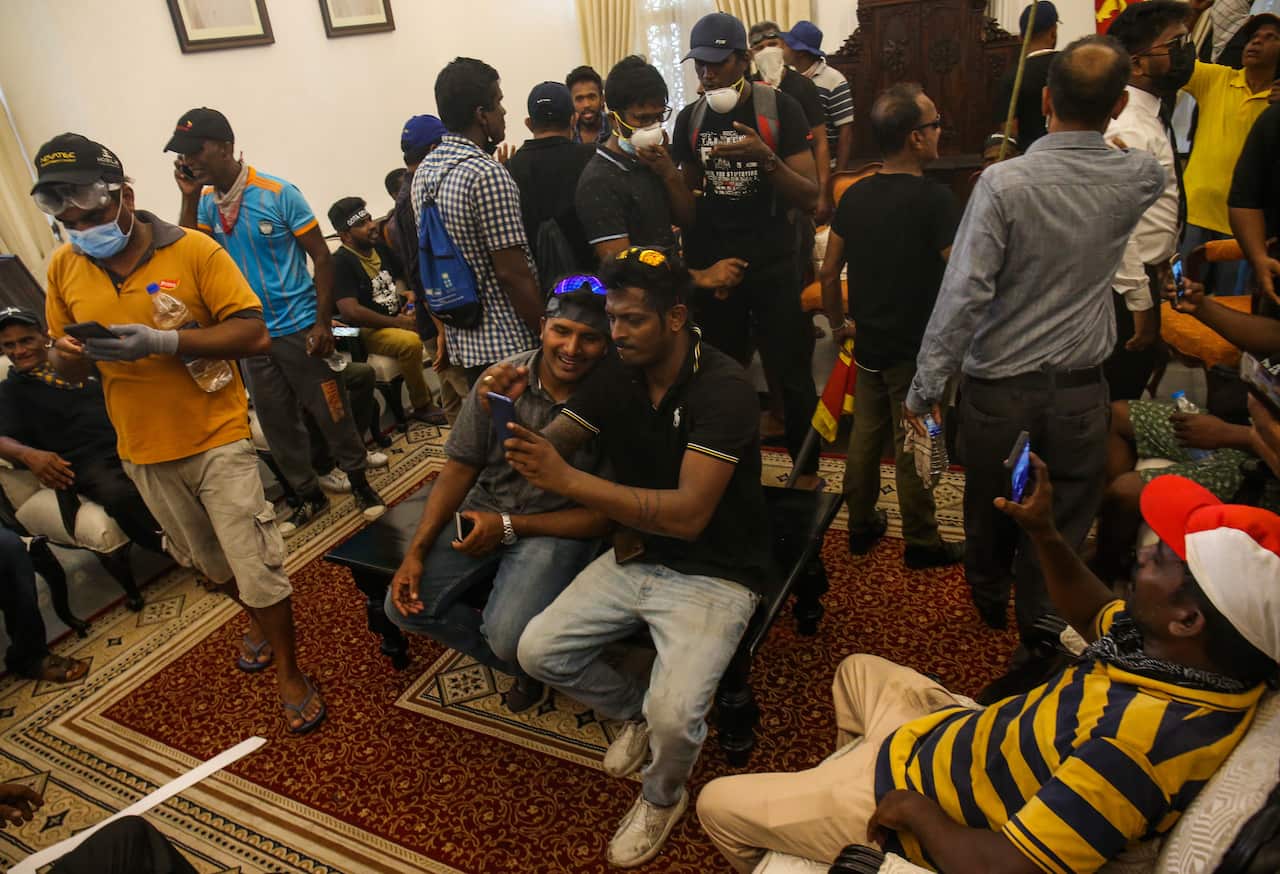 "Therefore there is no need for further disturbances in the country, and I urge everyone for the sake of the country to maintain peace to enable a smooth transition," the speaker continued.

Opposition MP Rauff Hakeem said a consensus was reached for the speaker of parliament to take over as temporary president and work on an interim government. But that failed to placate protesters, who stormed the premier's private residence and set it alight after night fell.Footage shared on social media showed a crowd cheering the blaze, which broke out shortly after a security detachment guarding Mr Wickremesinghe attacked several journalists outside the home.No casualties have been reported in the fire so far, and police said Mr Wickremesinghe and his family were away at the time.

Security forces attempted to disperse the huge crowds that had mobbed Colombo's administrative district earlier in the day, with dozens injured in the resulting clashes. Security forces use water cannons to disperse an anti-government protest rally. Protesters are calling for the resignation of the president over the alleged failure to address the economic crisis. Source: AAP / Chamila Karunarathne

Mr Wickremesinghe announced his own impending resignation but said he would not step down until a new government is formed, angering protesters who demanded his immediate departure."Today in this country we have a fuel crisis, a food shortage, we have the head of the World Food Program coming here and we have several matters to discuss with the IMF, (International Monetary Fund)" Mr Wickremesinghe said."Therefore, if this government leaves there should be another government."

Sri Lanka announced in April that it was suspending repayment of foreign loans due to a foreign currency shortage. Its total foreign debt amounts to $US51 billion ($A74 billion), of which it must repay $US28 billion ($A41 billion) by the end of 2027.

Sri Lanka has suffered through months of food and fuel shortages, lengthy blackouts and galloping inflation after running out of foreign currency to import vital goods.Thousands of people had poured into the capital for Saturday's demonstration, the latest outbreak of unrest sparked by the crisis.Police had withdrawn a curfew issued on Friday after opposition parties, rights activists and the bar association threatened to sue the police chief.Thousands of anti-government protesters ignored the stay-home order and even forced railway authorities to operate trains to take them to Colombo for Saturday's rally, officials said.

"The curfew was not a deterrent, in fact it encouraged more people to get on the streets in defiance," the defence official said. 23/06/202203:11"Passengers had commandeered trains to reach Colombo."The country has nearly exhausted already scarce supplies of petrol, but protesters backed by the main opposition parties hired private buses to travel to the capital.Demonstrators had for months been camped outside Mr Rajapaksa's seafront office to demand his resignation over the government's mismanagement of the crisis.Soldiers armed with assault rifles were bussed into Colombo on Friday to reinforce police guarding Rajapaksa's official residence.Authorities said they had deployed nearly 20,000 troops and police officers for a security operation to protect the president.Sri Lanka has defaulted on its A$74 billion (US$51 billion) external debt and has been in bailout talks with the International Monetary Fund.

Nine people were killed and hundreds wounded when clashes erupted across the country after Rajapaksa loyalists attacked peaceful protesters outside the president's office in May.

The unrest comes at the tail end of Australia's ongoing cricket tour of Sri Lanka, with Pakistan's squad also on the island for their upcoming series.Cricket officials said there were no plans to change their schedules, adding that the sport was unaffected by the political turmoil."The Australian Test is coming to an end and we are due to start the Pakistan series," a cricket board official told AFP.

"There is no opposition to having the games. In fact, fans are supportive and we have no reason to reschedule."