It's been a long time coming and today the family caught for four years in a tug-of-war over Australia's hardline asylum seeker policy on boat arrivals finally gets to go home — home to Biloela.

Priya Nadaraja, Nades Murugappan and their daughters Kopika, 7, and Tharnicaa, 4, have long been the desperate faces at the centre of the country’s "stop the boats" asylum seeker policy.

But today, after a community-driven campaign that started when the family were removed from their home in the central Queensland town, those faces will be back in Biloela beaming with the prospect of resuming lives interrupted.

The fight against deportation by the Sri Lankan couple and their Australian-born daughters is not over yet. And their experience has helped define Australia in the eyes of the world for its treatment of asylum seekers.

Their struggle sparked debate from dinner tables to federal parliament and united half a million ordinary Australians in support of the campaign to bring them back to Biloela.

The former Coalition government was unmoved in its belief the family was owed no protection by Australia, setting off protracted and complex legal cases over their visa statuses and cases for asylum.

But when the new Albanese government, which backs offshore processing and boat turnbacks, ordered the family be allowed to return to Biloela, this chapter of their ordeal was over.

Here is how their story has unfolded.

Priya and Nades arrive in Australia

Priya Nadaraja and Nades Murugappan arrived in Australia separately by boat in 2012 and 2013.

Both fled Sri Lanka, saying they feared persecution in the aftermath of war. They moved to the central Queensland town of Biloela on bridging visas. Nades worked at the meatworks and Priya did volunteer work.

Both were embraced by the rural community.

Their eldest child Kopika was born in May 2015, followed by her sister Tharnicaa in June 2017.

The family is known as the Murugappans but goes by Nades' full first name, Nadesalingam, in line with cultural practice.

According to court documents from June 2018, Nades claimed he was forced to join the militant Tamil Tigers (LTTE) in 2001 and was harassed by the Sri Lankan military.

However, he frequently travelled between Sri Lanka, Kuwait and Qatar between 2004 and 2010 for work.

He returned to Sri Lanka after the war was officially over in 2011, but said he was "taken and tortured".

It was then Nades fled on a boat and arrived at Christmas Island in April 2012, seeking asylum.

The couple lived in Biloela for about three years.

Tharnicaa was nine months old when immigration officials removed the family from their Biloela home at dawn.

They were flown to the Broadmeadows detention centre in Melbourne where Tharnicaa spent her first and second birthdays. About 200 people rally on the lawns of Parliament House in Canberra for the family's return to Biloela in September, 2019.(ABC News: Tahlia Roy)

The abrupt detainment shocked locals and spurred a grassroots fight, now known as the prominent Home to Bilo campaign.

Over the past four years, the family's plight has polarised the nation.

Supporters pleaded for government intervention to return the family to Biloela.

But the Department of Home Affairs said their case had been comprehensively assessed over many years, and the family did not meet Australia's protection obligations.

"They were considered boat people and they have to leave Australia," then-federal Member for Flynn, Ken O'Dowd, said. The Federal Circuit Court rejected the family's appeal against deportation in June, 2018.

Justice Caroline Kirton found the initial assessment by the Immigration Assessment Authority, which denied refugee status, had been properly conducted.

A separate application to have their case reviewed by the High Court was also dismissed in May, 2019.

Three months later, on August 29, 2019, the Nadesalingams were removed from detention and put on a plane bound for Sri Lanka.

Space to play or pause, M to mute, left and right arrows to seek, up and down arrows for volume.WatchDuration: 2 minutes 8 seconds2m 8s Tamil family moved to Christmas Island in the dead of night

The deportation was halted mid-air and the plane landed in Darwin at 3:00am, after a last-minute court-injunction.

They were then taken to the immigration detention centre on Christmas Island, which had closed earlier that year.

He was immigration minister in 2013 when the Abbott government introduced its "stop the boats" policy.

In October, 2019 the United Nations Human Rights Committee asked Australia to end the "existing situation of detention" for the family.

Supporters, once again, pleaded for the family to return to Biloela while the protracted legal battle over their immigration status continued.

"They are the only children in an Australian immigration detention centre," the family's lawyer Carina Ford said. In June 2021, Tharnicaa was flown to Perth with a suspected blood infection – accompanied by Priya.

More than a week after being separated, Nades and Kopika were also flown to Western Australia, reuniting the family.

Prior to and during the 2022 election, then-opposition leader Anthony Albanese promised the family would return to Biloela should Labor form government. Kopika and Tharnicaa watched the election coverage.(Supplied: Home to Bilo)Home to Bilo

After about 12 months of living, working and going to school in Perth, the Nadesalingams arrived in Brisbane this week.

Biloela supporters will welcome the family when they land at Thangool Airport this afternoon.

Banana Shire Mayor Nev Ferrier congratulated the Home to Bilo founders and said the community was ready to welcome the Nadesalingams back.

"The remarks we're getting, people are just coming to see where Biloela is and know it's the home of the Biloela family," he said. 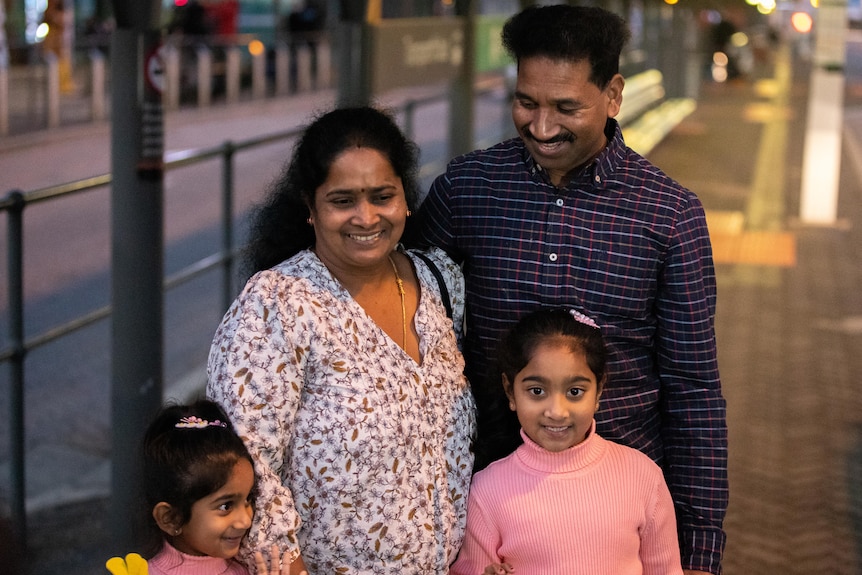 The family will make the most of their first weekend in town.

Priya plans to give a speech at the Flourish Multicultural Festival on Saturday.

Friends and family will then celebrate Tharnicaa's fifth birthday – her first in Biloela – on Sunday.

While the Nadesalingams are still on temporary bridging visas, the ABC understands the Albanese government is considering permanent residency for the family.

Local news direct to your inbox

ABC Capricornia will deliver a wrap of the week's news, stories and photos every Friday. Sign up here