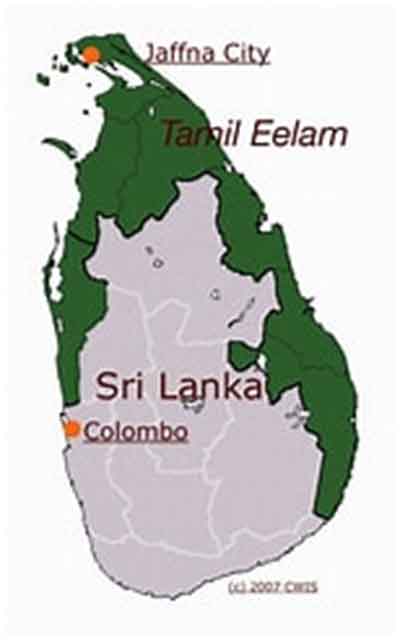 It is a universally accepted principle that people living in a democratic land should be treated as equals, irrespective of language, ethnic or religious differences. But in Sri Lanka democracy  is being crushed by the tyranny of the majority – the Sinhala Buddhist representatives – in Parliament…

Sri Lankan military has been building Buddhist statues and temples illegally on private and government lands without any permission. Sri Lankan military is carrying out its genocidal demographic change in the Tamil traditional homeland.

Tamil Eelam was once strewn with thousands of temples, churches, mosques, libraries, schools and statues of eminent persons and historical monuments. They were symbols of cultural richness; a national heritage revered with pride. Today many of them have been razed to the ground and others are in a dilapidated condition… due to …(the) tyranny of Buddhist fundamentalism.

Buddhism in Sri Lanka is after all not just a religion but given the “foremost” place in the constitution which the state has a responsibility to “protect and foster.” In practice, this translates into a rejection of any attempt to prosecute the armed forces for mass atrocities, who are instead labeled by Sri Lanka’s president as war heroes seen to be protecting the Sinhala Buddhist state.

Delivering his first speech in parliament as president of Sri Lanka, Ranil Wickremesinghe laid out a roadmap for Sri Lanka which vowed to uphold Buddhism;

‘I am constitutionally bound to give Buddhism the foremost place’ – Sri Lanka’s President lays out a roadmap for the future.

To the Hindus, religion forms part and parcel of the daily activities of their life; it is part of their way of life. Living with nature, they respect and worship it. In this context temples not only stand as places of worship but are also as an embodiment of cultural life; they are their cultural centres. Music, dance, drama, education, medicine and many other essential aspects of life evolve around the temples.

All five renowned Hindu shrines that existed long before the advent of Buddhism in Ceylon, – Thirukketheeswaram, Thirukkoneswaram, Naguleswaram, Munneswaram, and Thondeswaram – are now under the control of Sinhala Buddhist oppressors. The first three temples are under the direct control of the occupying armed forces of the Sri Lankan state which are made up entirely of Sinhala Buddhists except for a handful of Christians and Muslims.

Mahavamsa, a Buddhist chronicle, who set the stage for this painful drama. Actors carrying the myths, fantasies, superstitions and fables from the Mahavamsa, particularly the Duttugamunu episode, gave birth to “superior race”,  “sons of the soil” and “dhammadipa” theories. The actors at each period in history varied the form but the substance remained the same. These myths and superstitions were put forward as historical facts and whilst propagating militant role of Buddhism they pronounced that ‘only a Buddhist had the legitimate right to rule…’

An advertisement appearing in August 1996 in a leading Sinhala newspaper “Lanka Deepa” called upon the “Brave sons of Duttagamunu’s lineage to join the navy”. The imagery used confirms the racist nature of the actions of the present government. No wonder that the continuity of racism in Sri Lanka and its nightmarish growth into fascism, have become a horrifying specter on the world stage.

From an interview with J.R. Jayewardene by Ian Ward. London Daily Telegraph, 11 July 1983.

“I am not worried about the opinion of the Jaffna people now.. Now we cannot think of them. Not about their lives or of their opinion about us…The more you put pressure in the north, the happier the Sinhalese people will be here… really if I starve the Tamils out, the Sinhala people will be happy.”

The Party that gives more pressure to the Tamils will use that as their election promise and as a slogan during the election and come to power.