Home » The Fed stays the tightening course. Does the CBSL have another option?

The Fed stays the tightening course. Does the CBSL have another option?

The objective of this short article is to express a firm opinion that the CBSL has no option but to raise its policy rates further at the next policy meetings to suit the US Fed’s interest rate policy in view of the Fed’s policy decision and communication announced yesterday. The reason is because the CBSL also follows principles of the Fed’s monetary policy model and language for Sri Lankan economy.

As mostly predicted by market participants, the Fed yesterday raised its policy interest rates target corridor by another 75 bps to 3.75%-4.00% level although the US inflation peaked in July at 8.53%. The Fed’s key monetary policy tool is the policy interest rate that sets the target for overnight inter-bank interest rates for the purpose of driving inflation around a target of 2% in the long-term.

The rate hike announced yesterday is the 5th consecutive hike implemented from 4th April this year with a total hike so far being 3.50%.

Ongoing increases in policy rates will be appropriate for a stance of monetary policy sufficiently restrictive to return inflation to 2% over time. The Fed does not have a scientific way to decide whether inflation is entrenched. In determining the pace of future increases in policy rates, the cumulative tightening of monetary policy, the lagged impacts on economic activity and inflation and economic and financial developments would be considered (However, there are no benchmarks to assess these). Policy overtightening can be corrected easily by loosening. However, if the policy is too dovish, inflation will be embedded. Therefore, it is important to move expeditiously. The discussion on smaller rate hikes will come at the December meeting. The Fed thinks of positive real interest rates across the yield curve. The terminal policy rate will be higher than initially envisaged (Market forecasts have increased from 3.0%-3.5% in April to 5.0%-6.0% immediately after yesterday’s policy communication) The economy has slowed significantly from last year’s rapid pace. Real GDP rose at 2.6% last quarter while modest growth of spending and production is seen this quarter.  Growth in consumer spending has slowed from last year’s rapid pace due to lower real disposable income and tighter financial conditions. However, demand remains strong due to job gains and household savings. Despite the slowdown in growth of the economy, the labor market remains extremely tight, with the unemployment rate at a 50-year low (3.5% in September), job vacancies still very high and wage growth elevated. It is necessary to raise unemployment to get the demand down (In fact unemployment has fallen from 4% in January to 3.5% at present, despite the faster monetary tightening). Financial conditions have tightened significantly and the effects on demand in the most interest-rate-sensitive sectors of the economy such as housing are observed. The Fed does not have tools to directly affect prices such as energy prices but it tools will affect interest-rate sensitive demand sectors and help resolve demand and supply imbalances. Soft landing is still possible, but the window has narrowed.

Overall, given the persistence of high inflationary pressures envisaged across the world and strong economy, strong demand and tight labour market with unemployment at a 50-year low in the US, markets are observed to be pricing another rate hike of 75 bps in the Fed’s December meeting, despite inflation seems to have peaked.

The present policy direction of the Bank of England and European Central Bank whose currencies are reserve currencies next to the US Dollar is similar. The policy rates increase has been 1.15% to 1.25% by the Bank of England since December 2021 (six consecutive hikes) and 2.00% to 2.25% (Marginal lending rate) by the European Central Bank since July 2022 (three consecutive hikes). Further, their policy communications also are to stay the course of rates hiking as inflation does not show any sign of pivot.

The CBSL has no option but to follow the Fed

As interest rates of global reserve currencies led by US Dollar are being raised expeditiously with entrenched inflationary pressures (risen to 8% to 11%) amidst the effects of Russian-Ukraine war and China’s supply chain disruptions continued with the zero Corvid tolerance policy, central banks except in Japan and China are compelled to stay the continued tightening course. Central banks in emerging market economies generally follow suit primarily to keep their interest differentials in order to fight foreign capital outflow to developed market economies and to prevent currency crises.

The CBSL has raised policy rates so far by 9% to the corridor of 14.5%-15.5% and caused government securities yield rates rising to 30%-33%. However, inflation remains to be at hyper-levels around Y-o-Y 70% as compared to the CBSL monetary policy target of 4%-6%. Further, money printed to finance government budgetary operations has been fast rising without any sign of peaking, i.e., Treasury bill holding of the CBSL has risen from Rs. 725 bn at the end of December 2020 to Rs. 2,440 bn to-date (an increase of 237%). 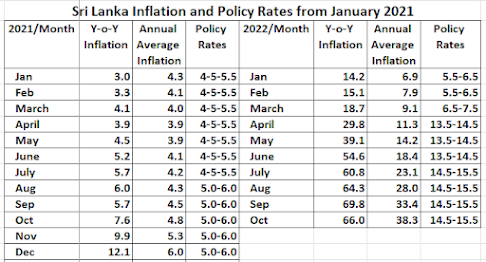 Therefore, the CBSL which strictly follows principles of the Fed-styled monetary policy model with policy rate-based open market operations to control inflation as recommended by the IMF has no option but to stay the rate hiking course expeditiously and aggressively, given the exorbitant disparity between the inflation target of 4%-6%, continuously rising inflation around Y-o-Y 70% and IMF financial policy package being awaited.

Otherwise, the monetary policy rationale and consistency adopted by the CBSL as communicated in recent media reports and interviews will be questioned where concerns will be raised over possible policy irregularities and policy independence loss detrimental to the inflation control and price stability objective of the CBSL.

(This article is released in the interest of participating in the professional dialogue to find out solutions to present economic crisis confronted by the general public consequent to the global Corona pandemic, subsequent economic disruptions and shocks both local and global and policy failures.)

(Former Director of Bank Supervision, Assistant Governor, Secretary to the Monetary Board and Compliance Officer of the Central Bank, Former Chairman of the Sri Lanka Accounting and Auditing Standards Board and Credit Information Bureau, Former Chairman and Vice Chairman of the Institute of Bankers of Sri Lanka, Former Member of the Securities and Exchange Commission and Insurance Regulatory Commission and the Author of 10 Economics and Banking Books and a large number of articles published)