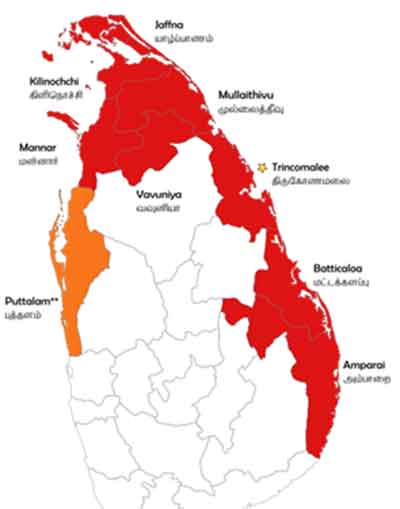 Tamil Eelam is the historical homeland of the Tamil nation of the island of Ceylon (today known as Sri Lanka). In ancient Tamil literatures, the island was referred to as Eelam. Tamil Eelam is the modern collective name for the Tamil-speaking territories of the precolonial Tamil kingdoms and principalities that existed in the districts of Jaffna, Killinochi, Mullaithivu, Mannar, Vavuniya, Trincomalee, Batticaloa, Amparai and Puttalam in the Northern, Eastern and Western parts of the island, respectively.

Sri Lankan state violence, persecution and discrimination from the 1940s to 70s pushed Eelam Tamil leadership to answer the Tamil national question, manoeuvring through a maze of democratic and diplomatic methods in an attempt to achieve only a basic level of autonomy for the Tamil people. For 30 years, the Sri Lankan state’s response to these methods was one of sheer brutality and repression. The failure of the ahimsa and democratic movement further induced Tamils to reject the racism of the Sri Lankan state, leading to the rise of Tamil armed resistance movements in the 1970s designed to defend the very existence of the Eelam nation.

The state of Sri Lanka is unable to provide the support needed for a war-torn population; this responsibility inevitably fell on the shoulders of the diaspora. They shouldered the immediate call for mutual aid, raised money, created infrastructure around education and different economic empowerment schemes.

Following the aftermath of the genocide,  the Sri Lankan government “treated the Tamil resistance movement as simply a problem of ‘terrorism’, they promised to bring about reconciliation, accountability and reforms to the Prevention of Terrorism Act. None of this has happened

The social and regional construction of the Tamil and Sinhalese nations revolves around the cores and boundaries of the Sinhalese and Tamil people and their traditional homelands. In broad outline, Sinhalese nationalists commonly claim that the undivided island is the homeland, Dhamma Dipa, for the

Sinhalese people and their particularly authentic form of Theravada Buddhism.Tamil nationalists, on the other hand, hold it as unquestionable that the Tamil-speaking people of Sri Lanka constitute a separate nation and that their traditional settlement pattern outlines the boundaries of the Tamil homeland, or Tamil Eelam:

The physical act of war may have ended, but a war against the Tamil nation has not. The Tamil nation remains under siege by Sri Lankan Forces; military bases now occupy traditional Tamil lands. In addition, there is the ongoing destruction of traditional Tamil religious institutions, graveyards, and memorials by state-sponsored organizations. The occupation has led to the rise in the colonization of traditional Tamil areas by the Sinhala people. Tamil areas are under constant surveillance, forcing arbitrary arrests and prolonged detention without judicial oversight, emboldened by draconian terrorism laws. The Sri Lankan state routinely arrests students and activists, who face torture and death.

Nearly 13 years after the armed conflict in Sri Lanka ended, impunity for grave human rights violations and abuses by all sides is more entrenched than ever, with the current Government proactively obstructing investigations and trials, and reversing the limited progress that had been previously made, states the report, mandated by UN Human Rights Council resolution 40/1.

The report urges enhanced monitoring and strong preventive action by the international community, warning that “Sri Lanka’s current trajectory sets the scene for the recurrence of the policies and practices that gave rise to grave human rights violations.”

Since Sri Lanka has demonstrated no political will towards domestic accountability measures post-2009, opportunities for justice lie within internationalized options such as the UNHRC and the intervention of member states through the establishment of alternative paths to justice.

On January 27 2021, the UN Office of High Commissioner for Human Rights (OHCHR) released a damning report on Sri Lanka’s deteriorating human rights situation, domestic state failures and its trajectory, revealing the country is on an “alarming path towards recurrence of human rights violations.”

The UNHRC should explore and employ a wide range of tools and mechanisms to address human rights violations, war crimes, and crimes against humanity.