Samarkand, once the magnificent capital of the vast empire of Tamerlane, had the privilege of hosting the 2022 annual summit of the Shanghai Cooperation Organization (SCO). The organization represents 40 percent of the global population and 30 percent of its GDP.

Iran, hitherto a dialogue partner, has been admitted as a permanent member. Turkey participated as an SCO dialogue partner. Aside from Azerbaijan, the grouping’s dialogue partners include Cambodia, Nepal, Sri Lanka, and Armenia. The SCO is the largest international group outside the UNO.

The heads of member states addressed the inaugural session on the concluding day of the Council of Heads of State summit, while SCO dialogue partners’ leaders addressed the summit at the second session.

Apart from discussing its business matters in two sessions, the participants held several bilateral meetings on the sidelines of the conference to exchange views on bilateral issues.

The spirit of the Samarkand Summit was reflected in a carefully drafted welcome address by Mr. Shavkat Mirziyoyev, the President of Uzbekistan and the host of the summit. He said, “the ‘Samarkand spirit,’ which looks at the world as indivisible and not fragmented, can serve as the basis for a fundamentally new format of international interaction, including within the Shanghai Cooperation Organization,”.

He asserted. “Today, the SCO family is the world’s largest regional organization, which has united a huge geographical space and about half of the population of our planet. The basis for the SCO’s international attractiveness is its non-bloc status, openness, non-targeting against third countries or international organizations, equality and respect for the sovereignty of all participants, refusal to interfere in internal affairs, as well as the prevention of political confrontation and unhealthy rivalry.” 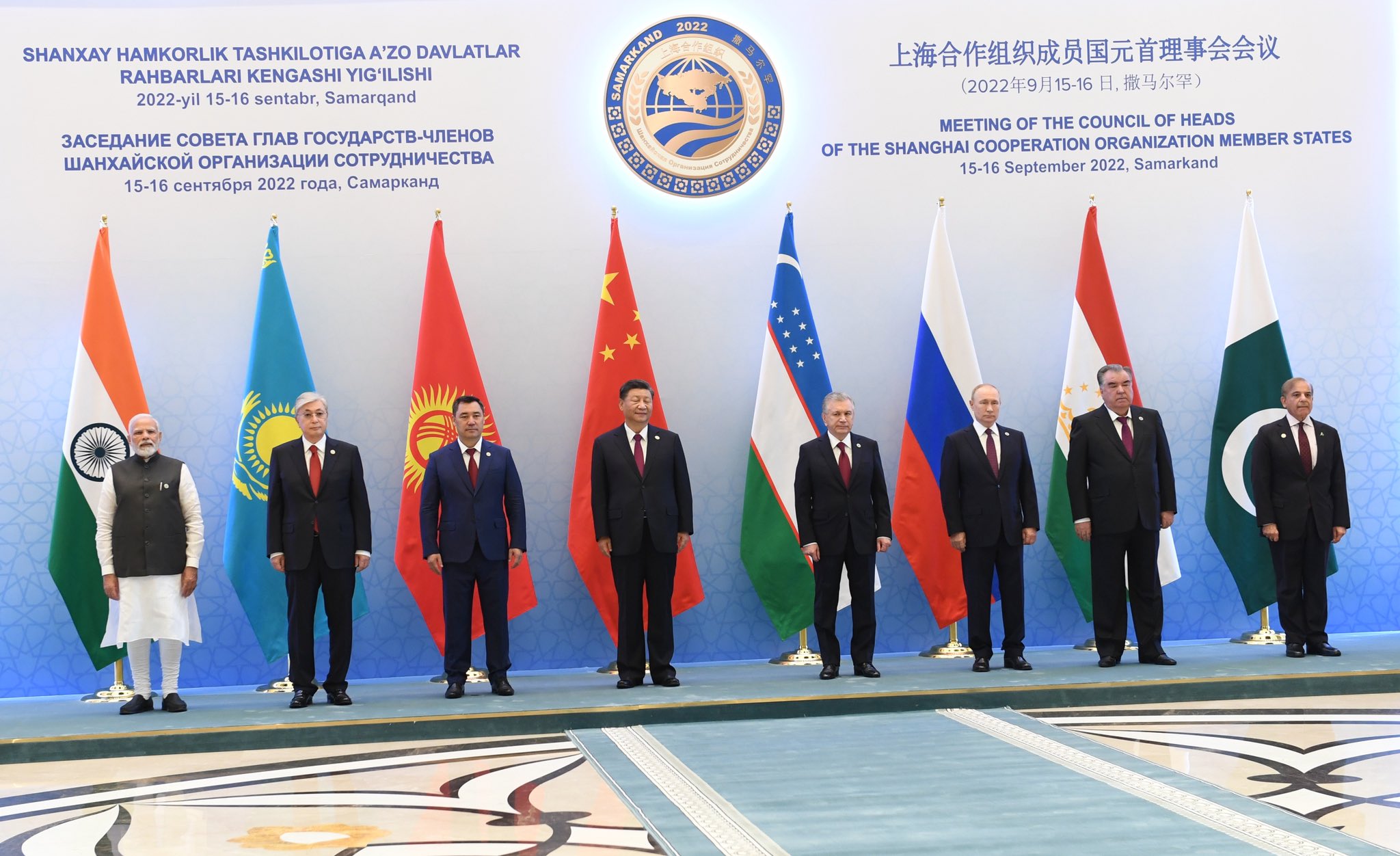 SCO leaders at the Summit in Samarkand.

Tracking the deliberations of the summit carefully will show that labeling the SCO as an antidote to NATO would be only a subjective assessment.

For example, the proposal for Global Security Initiative (GSI) floated by President Xi of China was rejected not only by India but by all permanent members as well. Even Russia did not show any eagerness in the proposal.

It was noted in particular that the Central Asian permanent members of SCO were against SCO degenerating into blocs and spheres of influence.

The summit has also revealed that the permanent members enjoy the freedom of reflecting the views of their respective countries and peoples without the fear of losing or winning special favors.

President Xi told Russian President Putin that he had “questions and concerns” about the ongoing war in Ukraine. Putin publicly acknowledged that China had certain concerns despite its known pro-Russia stance on Ukraine.

Similarly, Indian Prime Minister Modi, a good friend of Putin, told him a cryptic sentence in the bilateral meeting on the sidelines of the conference that “this is not the era of war but dialogue and democracy.”

It speaks a lot about India’s perception of the Ukrainian war and her eagerness that it should come to an end, although India did not sign the condemnation of Russia for launching an attack on Ukraine.

Amusingly, while the Samarkand summit was in session, the Biden administration announced it would send another $600 million in military aid to Ukraine as the U.S. rushes more weapons to fuel Kyiv’s counteroffensive that has reclaimed large stretches of the embattled country and forced Russian troops to retreat. The White House said it was the 21st time that the Defence Department has pulled weapons and other equipment off the shelves to deliver to Ukraine.

In the same vein, the United States on Friday announced a new $1.1 billion package of arms to Taiwan in a new bid to boost the island’s defenses amid soaring tensions with Beijing.

The latest US sale comes a month after House Speaker Nancy Pelosi defiantly visited the self-governing democracy, prompting mainland China to launch a show of force that could be a trial run for a future invasion.

It will also be recalled that a week before the Samarkand Summit, Biden reversed a Trump-era decision.  The administration approved a $450 million F-16 fighter jet fleet sustainment program for Pakistan, a move that coincided with the Indo-US security dialogue in Delhi.

In violation of the F-16 delivery agreement, Pakistan has not stopped using the jet in its armed conflict with India. The F-16 was used by Pakistan Air Force to down an Indian jet piloted by Abhinandan. India brought the matter to the notice of the US authorities.

The US goes by its foreign policy perceptions and parameters, but the timing of announcing financial packages to Pakistan, Ukraine, and Taiwan could have been drawn more judiciously.

The US reaction to the Russian war against Ukraine has thrown up some fundamental issues that are going to become crucial to the future summits f the SCO. The first is the strategy of fighting proxy wars which means providing military hardware, financial support, and international media hype to the proxy fighting war to further the interests of the US or NATO.

The case of Ukraine and, more importantly, Pakistan can be cited. While in the former instance, the immediate interest is that an East European State contiguous to Russia is sought to be made the Achilles heel, in the latter case, the interest is to restrain or delay India from becoming a strong democratic power in Asia capable of challenging China.

The second issue which might come up for discussion in the SCO 2023 summit to be held in New Delhi is the unilateral decision of the US imposing sanctions on countries that do not tow the American policy line. If a discussion on this topic is undertaken, the matter will have to be pursued at the level of the UN and the Security Council.

The need for a thorough discussion on the topic arises from the experience that the imposition of sanctions has an adverse impact not only on the country sanctioned but also on many other countries for no fault of theirs.

We are living in a world that is interconnected in more than one way, more particularly in terms of trade and commerce, and energy. The exemptions given selectively create more problems than solving them. Perhaps this was in the mind of Vladimir Putin when he vehemently opposed the philosophy of a unipolar world.

The case of the Iran-India oil deal can be cited in the context of exemptions. Amidst US sanctions on Russia, the exemption has been given to India to import oil from Russia. Iran has raised the question of why India, an old buyer of Iranian oil, should not be allowed to import oil from Iran without making the excuse of sanctions imposed on Iranian oil exports.

Theoretically speaking, there appears to be a rationale in the argument, but India will choose to buy oil on competitive terms. Iran considers it a dichotomy that must be removed.

The summit has provided an opportunity for the participants to discuss matters of mutual interest and straighten angularities, if any. The deck cannot be cleared in one go, but an attempt in the right direction has to be made.

The one-to-one meeting between India and Russia was rightly speculated to be constructive. The Samarkand Declaration emphasizes eradication of terrorism is a serious threat to human life. Of all the countries, it was Pakistan that laid stress on combating terrorism and separatism.

True, Pakistan is faced with a grave threat from the Tehreek Taliban-e Pakistan, but Pakistan did not suggest measures she would be pursuing to uproot terrorist organizations within that country that openly identify foreign countries or groups or segments of society against whom they would use weapons for whatever reasons.

Earlier, Islamabad had accused the Taliban in Kabul of sheltering Maulana Azhar, the chief of Jaishe Muhammad. Pakistan wanted to float this news for the consumption of FATF, which is holding Pakistan on its grey list.

But Taliban have repudiated the accusation calling it an attempt to defame them as they have nothing to do with Maulana Azhar. Kabul said that Pakistan was trying such canards for use at the FATF meeting.

A meaningful decision taken by the SCO summit in the context of terrorism is to enlist the persons and organizations designated by the United Nations within the territory of member countries. This is of much significance because the member countries will come to know whether they have to defend the terrorists or not.

Russia has suggested that travel between Russia and India be made visa-free. Along with this, India has opened the issue of the right to overland connectivity, perhaps keeping in mind the difficulty faced by India in overland connectivity with Afghanistan and Central Asian countries.

If the trade and commerce objectives of the member countries mean anything, then Pakistan must open the trade route for India, Nepal, Bangladesh, and Myanmar for the transport of goods through overland routes to Central Asia.  Once that happens, it will be a big boost to regional trade and add to the prosperity of the trading partners.

In the final analysis, it is reasonable that the positive aspects of the SCO are given more importance because these are beneficial to the vast population of these countries. The US has to befriend the organization representing almost one-half of the world population.

The summit has shown that the world is concerned about the war in Ukraine as also about the hegemonic stances like initiating proxy wars or sanctions. The host of the summit, President Shavkat Mirziyoyev of Uzbekistan, hinted at what divides the nations in the context of the present crisis and what should the way be out.