Wattala Magistrate dismisses case against a woman for being a lesbian

Court accepts argument  that homosexuality is neither a mental illness nor an offence.

In a ground-breaking decision, the Wattala Magistrate’s Court dismissed a case filed against a lesbian woman accepting the submission of defence counsel that homosexuality is neither a disease of the mind nor an offence.

Background to the case

A case was filed at the Wattala Magistrate’s Court against a 22-year-old lesbian woman. The parents of the victim, with the help of the Welisara Mahabage police, had filed a motion in Court seeking a declaration that she was mentally ill because she was a lesbian.

The parents of the victim had been illegally confining the adult woman and subjecting her to abuse, harassment, and forced conversion services after she informed them of her sexual orientation and that she was in a consensual and loving, same-sex relationship. 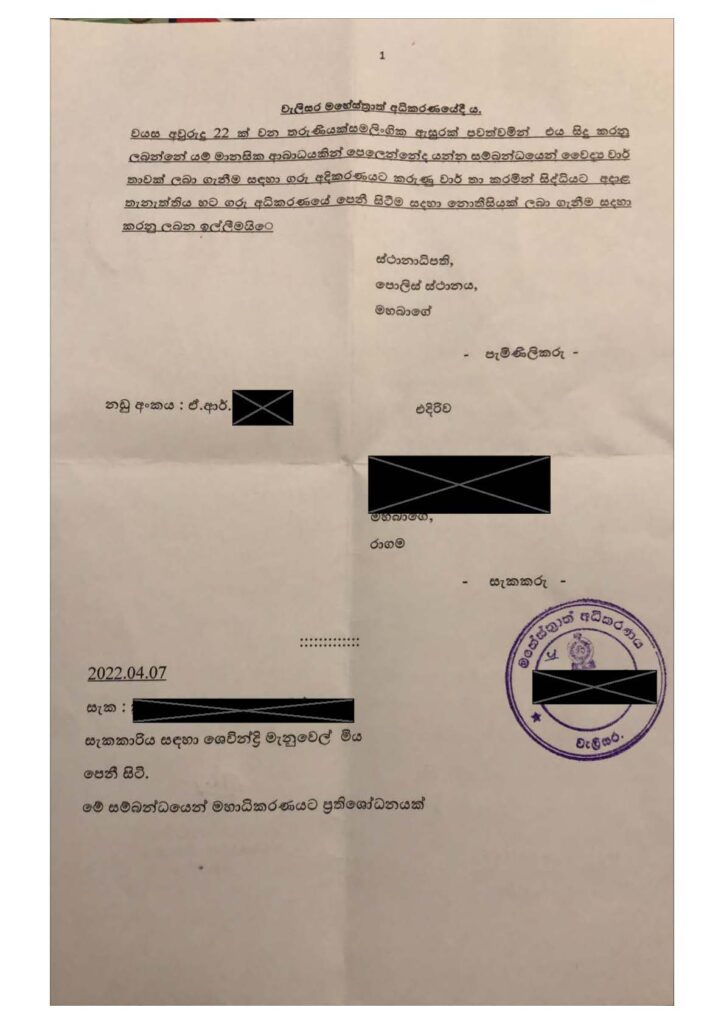 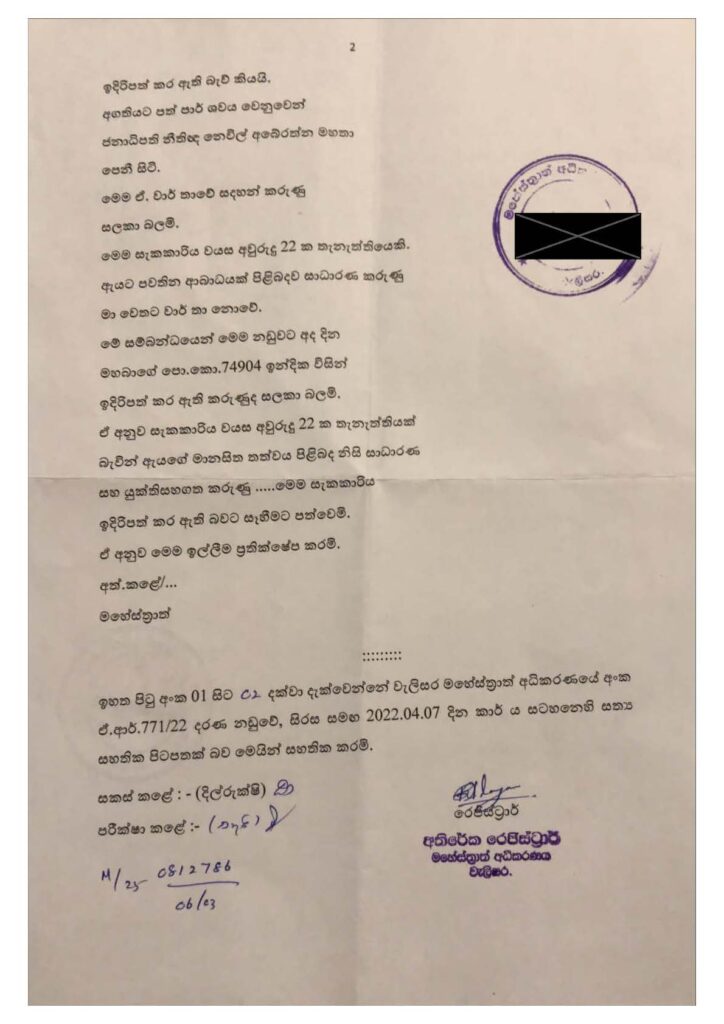 One week later, the Police summoned all parties back to the Police station stating that there was no evidence of an offence being committed on the part of the victim and they wished to release her possessions back to her. The counsel appearing for the parents of the victim then contested the ownership of the possessions. The Police then stated that this dispute should be resolved by the Magistrate and presented the facts to Court.

First hearing before the Interim Magistrate

On 21 March 2022, the case was taken up before an Interim Magistrate at the Wattala Magistrate’s Court. Appearing on behalf of the parents,the parents’ lawyers, a President’s Counsel, made an application to the Court that the victim suffers from a mental illness and should be subjected to a psychiatric evaluation by a Judicial Medical Officer (JMO) because of her homosexuality. Despite there being no specific offence charged and no legal basis for a medical examination, the Interim Magistrate had ordered the victim to be produced before a JMO for examination before the next hearing.

In August 2021, the Sri Lanka College of Psychiatrists also issued a statement that homosexuality was not a mental illness. They further went on to state that the myth of homosexuality being a mental illeness lacked any scientific-based evidence and called on the relevant authorities to repeal S.365 and 365A of the Penal Code.

Sections 365 and 365A of the Penal Code do not expressly criminalise homosexuality but is misapplied and misinterpreted by law enforcement to persecute LGBT people.

The case was called again recently by the Wattala Magistrate Court. The Magistrate was then informed of the revision application that was made against the order of the Interim Magistrate. Further allegations were then put forward by the complainant’s lawyer that the victim had been ‘brainwashed’ and ‘abducted’ by her partner, despite the victim’s claims of being in a consensual relationship. This was despite the victim having earlier made a statement to the Mahabage Police Station that she does not wish to live with her parents.

Arguments were then raised by the victim’s lawyer that since the victim was of 22 years of age, she is an adult and is in full capacity to make her own decisions. The victim’s lawyer also informed the court of the statement issued by the Sri Lanka College of Psychiatrists, which rejected homosexuality as a mental illness. Furthermore, evidence was provided to the fact that the victim did not suffer from any mental illness that warranted her confinement since she was holding a Bachelor’s Degree in Business and was employed as a teacher.

The complainant’s lawyer argued that releasing the victim to the public would endanger children as she was a teacher.

Being a lesbian is not an offence

Following these arguments, the Magistrate stated that there was in fact a lack of evidence of any mental illness and that no offence had been committed by the victim.

The Magistrate dismissed this case on the grounds that a JMO examination was not warranted since there was no evidence that the victim was suffering from a mental illness, thereby accepting that homosexuality was not a disease of the mind. 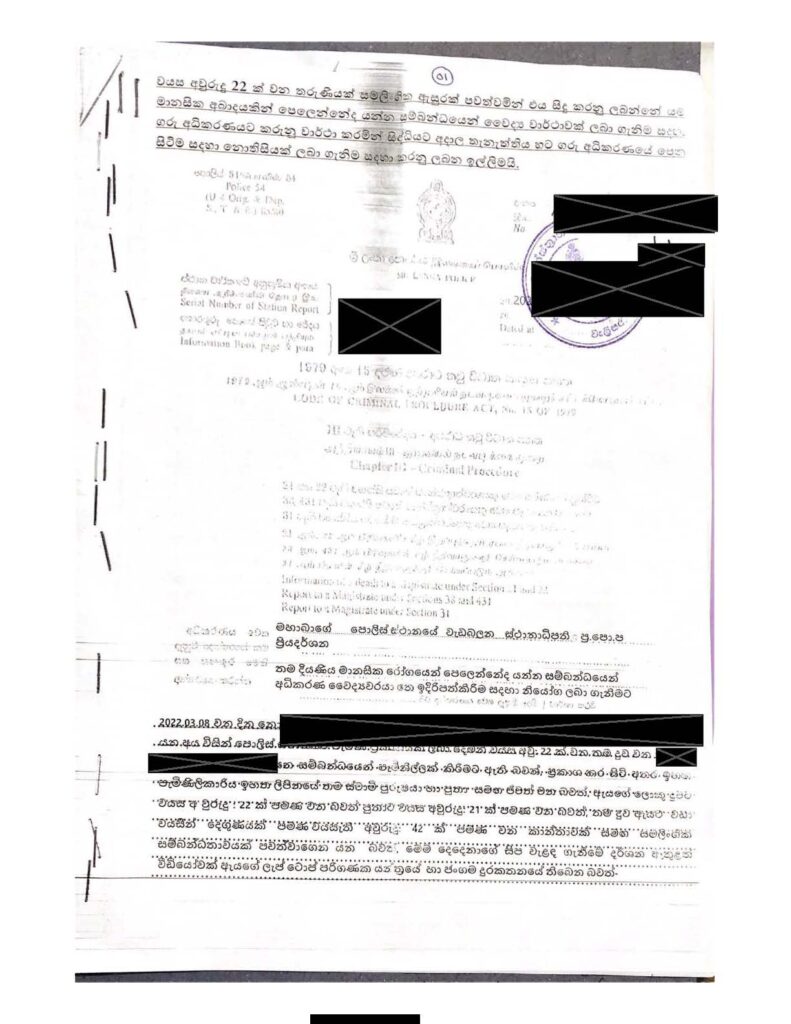 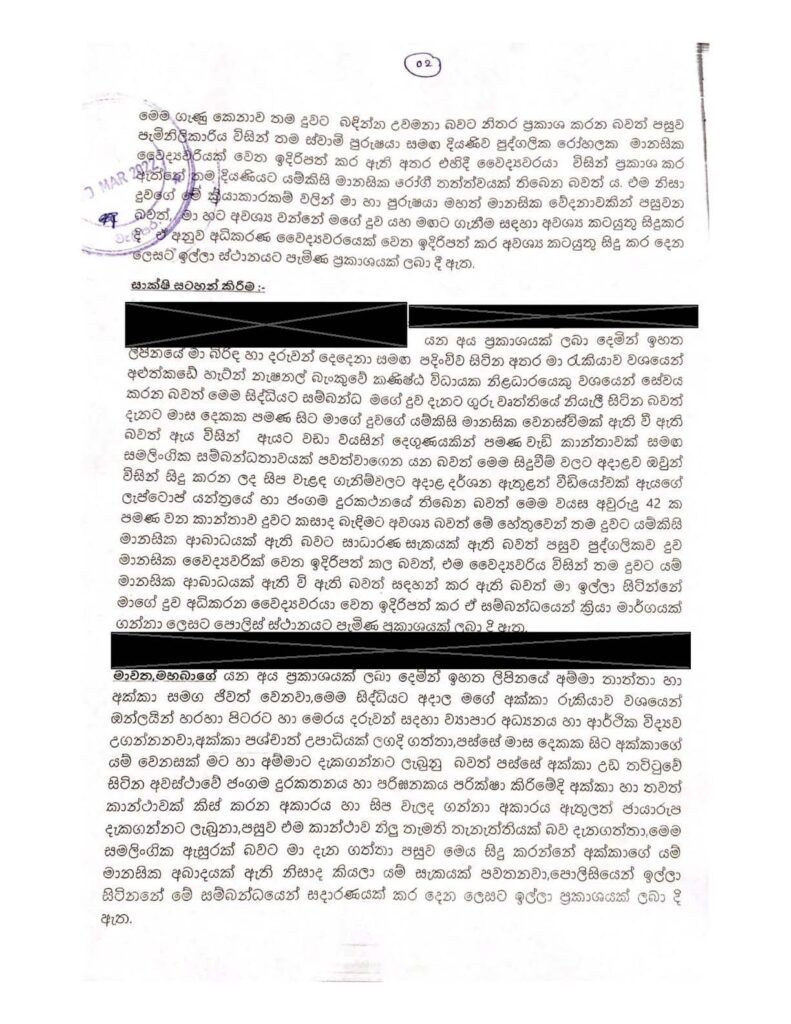 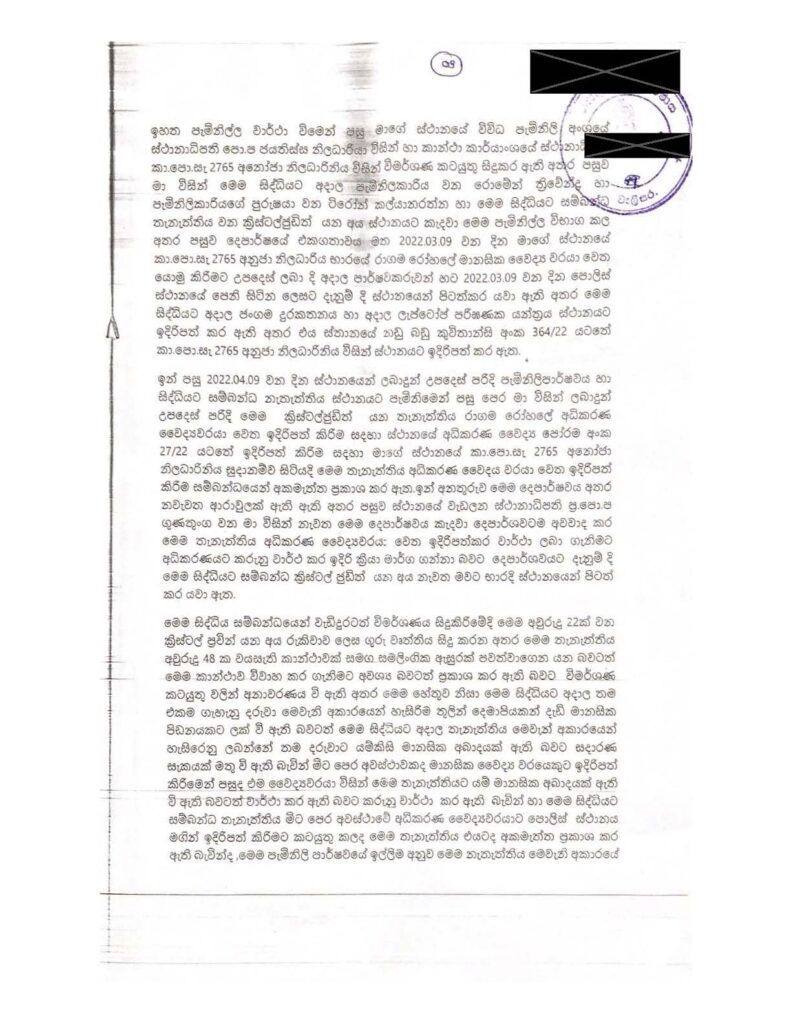 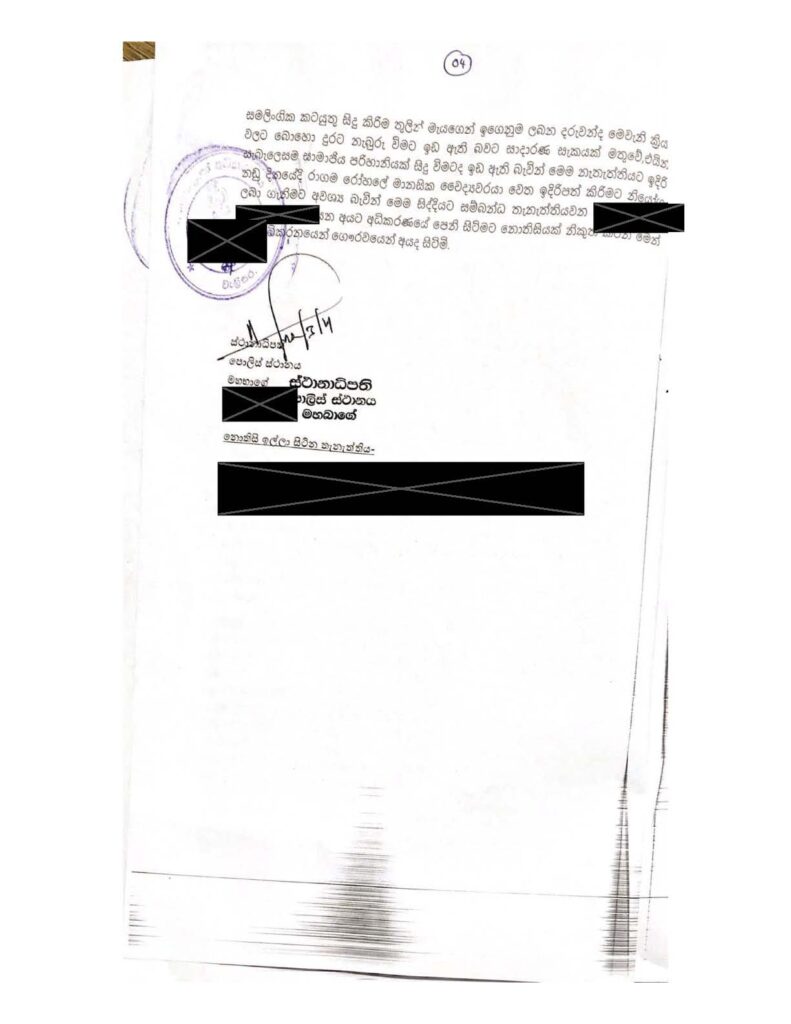 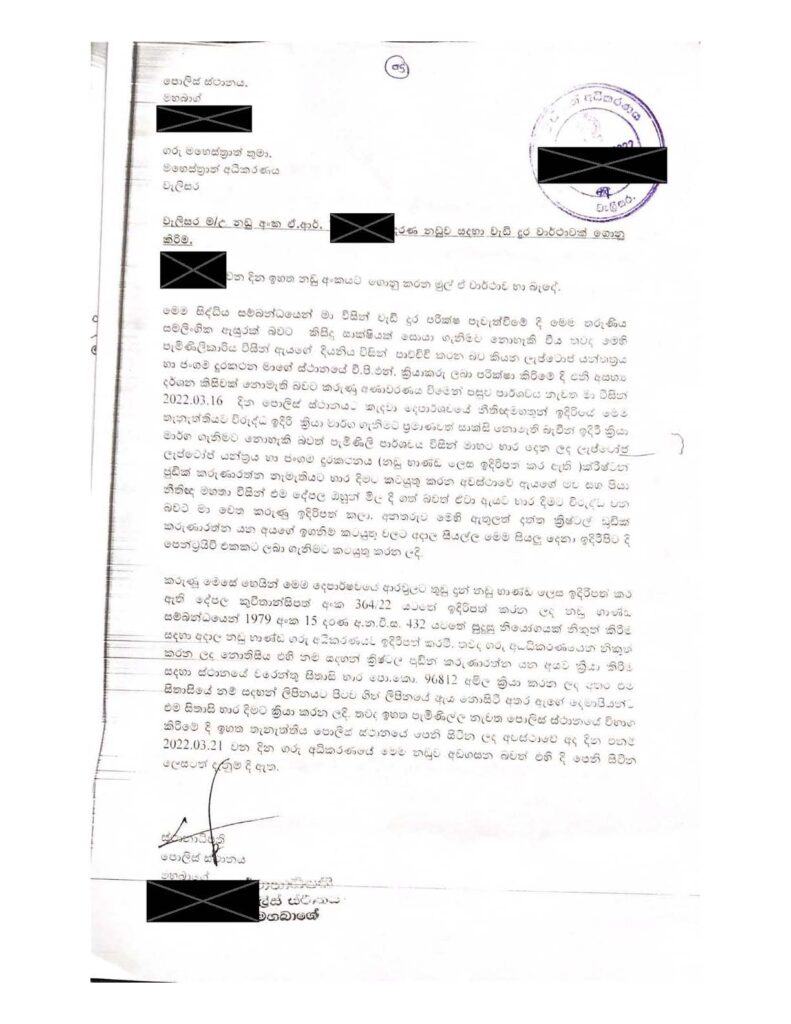 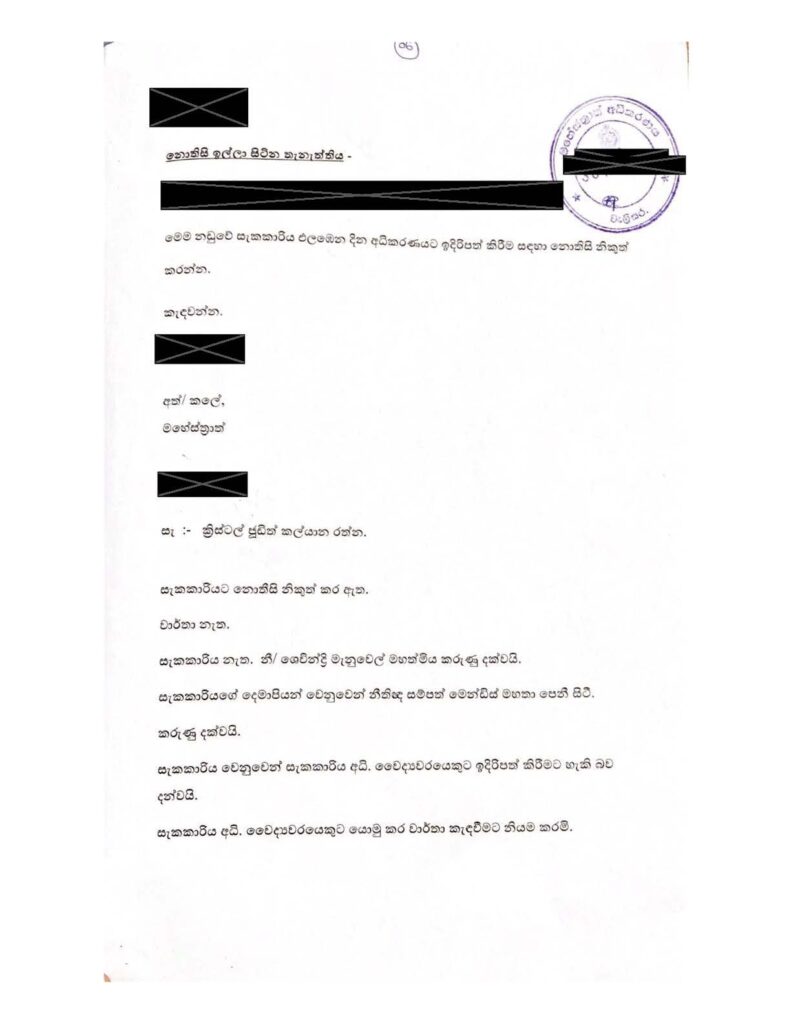